Where to Go Swimming With Sharks in The Bahamas 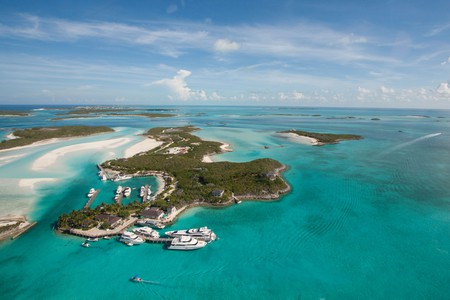 If the 1975 thriller ‘Jaws’ put you off swimming in the sea forever, some shark therapy might help cure your fears. If you’re cruising through The Bahamas, swimming with sharks is one of the most popular and thrilling activities you can do. The waters around this chain of islands serve as a shark sanctuary, protecting more than 40 species. Here we profile the best experiences you can have with these magnificent creatures, from mellow swims with “tame” nurse sharks in the Exumas to daunting free dives with tiger sharks and hammerheads off Bimini.

Navigate your way to the best shark-diving sites in The Bahamas by chartering a boat for the day through SamBoat. Alternatively, book a week-long sailing adventure through Dream Yacht Charter.

Where can you see sharks in The Bahamas?

Friendly nurse sharks swarm around the marina at Compass Cay in the Exumas. It’s the most popular shark-watching spot in The Bahamas for non-divers, as these bottom-feeders are now accustomed to human interaction. Great options for scuba divers include the Tiger Beach dive site off Grand Bahama, named for the tiger sharks that congregate here in large numbers. Bimini is considered one of the best places in the world to dive with hammerhead sharks. And at Shark Junction off Grand Bahama, you can feel the thrill of being surrounded by dozens of Caribbean reef sharks during a feeding frenzy. 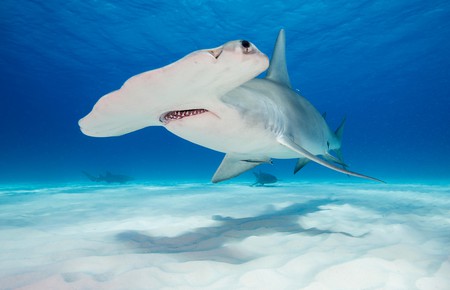 Is it safe to swim with sharks?

The Compass Cay nurse sharks are laid-back and usually harmless, allowing you to stroke them. They’re so used to fishy hand-outs from humans, they swarm around the dock and swimmers. Nonetheless, swimming is entirely at your own risk. Sharks are wild animals and you should exercise caution – always keep your hands away from their mouths. On shark dives with other species, obey your divemaster’s instructions for safe interactions. Caribbean reef sharks are indifferent to the presence of divers, although they may become aggressive in the presence of food. Despite their size and fearsome appearance, hammerheads and tiger sharks are rarely aggressive toward humans, but are potentially dangerous and should be avoided when not with an experienced divemaster. 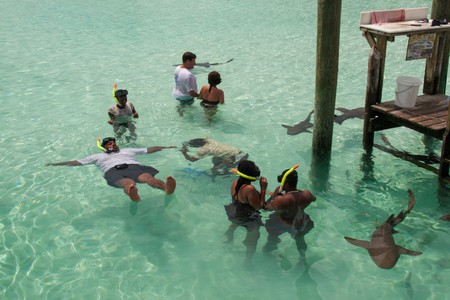 What to know about nurse sharks

Easily recognised by their brown colour, broad snout and tiny eyes, the inshore bottom-dwelling nurse shark can grow up to 10ft (3m) long. Resembling giant catfish, they have two barbels beneath the snout, which they use for probing the shallow seabed sand for prey. The nurse shark sucks in food like a vacuum and they are strong enough to suck a queen conch right out of its shell. Nonetheless, their small mouths contain hundreds of small, razor-sharp teeth. Relatively sedentary, the slow-moving and gregarious species typically spends daylight hours resting in caves or under ledges or gathered in large sedentary groups as at Compass Cay.

Yachters can simply sail into Compass Cay Marina and slip into the water with the sharks. Many tour companies offer day-trip excursions that combine the Compass Cay experience with the swimming pigs at Pig Beach. Staniel Cay Adventures offers boat trips from Staniel Cay, and Bahamas Air Tours has trips from Miami and Nassau. Bimini Scuba Centre is recommended for dives with hammerheads off Bimini and tiger sharks at Tiger Beach. UNEXSO (Underwater Exploration Society), on Grand Bahama, is recommended for participating in a shark-feeding dive. 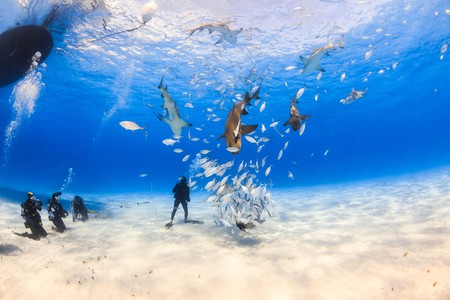 At the Tiger Beach dive site, you can swim with lemon and Caribbean reef sharks | © Nicolas Voisin / Alamy

Top tips on swimming with sharks in a responsible way

Sharks are potentially dangerous creatures, so treat them with utmost respect and caution. Even the relatively harmless nurse shark has been known to nip at swimmers or divers, although almost always in self-defence. Treat them with respect, and they’ll usually do the same. Don’t touch the nurse sharks of Compass Cay – it’s best to give them space. Also do not attempt to feed them, as this can increase the risk of being bitten.

What to expect on shark-feed dives

Although most dives with sharks do not involve feeding sessions, several dive operators provide certified divers with an opportunity to witness sharks feeding up close and personal. At Shark Junction, off Grand Bahama, you’ll descend 9m (30ft) to settle on the sandy seabed as Caribbean reef sharks gather in expectation of being fed. Once you’re settled, kneeling in a circle or line, UNEXSO staff feed the sharks while you watch motionless and in awe as they slink around you with effortless grace. Stuart’s Cove Dive Bahamas offers a similar two-tank dive trip off New Providence. 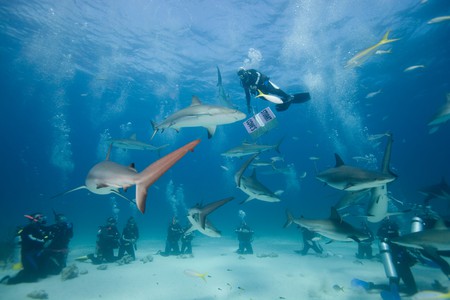 Go wildlife spotting around The Bahamas by hiring a boat for the week through Dream Yacht Charter, or book a day rental through SamBoat.