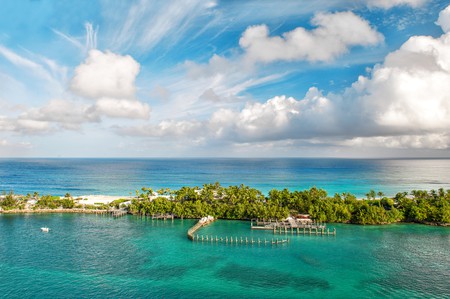 Music fans who paid up to £9,000 to attend a new boutique festival in the Bahamas have likened it to The Hunger Games after turning up to an unfinished site overrun by feral dogs.

Fyre Festival, which was due to start today, has descended into chaos as many revellers tried to return home after seeing the state of the festival site.

Instead of the luxury facilities and gourmet cooking in paradise they were promised, festival goers were reportedly greeted by the sight of half-built tents, piles of rubbish and feral dogs wandering around.

In case you're wondering, those "cabanas" are actually disaster relief tents.#fyrefestival pic.twitter.com/jaZpkIKVT2

The models can be seen swimming and relaxing on the beach on the festival’s website with the event billed as a ‘cultural moment created from an alchemic blend of music, art and food’.

So Fyre Fest is a complete disaster. Mass chaos. No organization. No one knows where to go. There are no villas, just a disaster tent city. pic.twitter.com/1lSWtnk7cA

A view of the luxury food court with some luxury school bus transportation at Fyre Festival. #fyre #fyrefestival pic.twitter.com/XL3PtRw8q0

These are the secure lockers at Fyre Fest. They forgot to tell us we needed locks. #fyrefestival #fyrefest pic.twitter.com/Tqyjqbg2Gy

The event was organised by Ja Rule and Billy McFarland’s company, Fyre Media, with acts like Major Lazer, Disclosure and Skepta scheduled to play.

Packages for the festival cost from $4,000 to $12,000, and included a chartered flight from Miami to the ‘private island’, as well as accommodation in a ‘geodesic dome’ and access to a yacht.

@FyreFraud Here's the dinner they fed us tonight. Literally slices of bread, cheese, and salad with no dressing. #fyrefraud #fyrefestival #dumpsterfyre pic.twitter.com/NmNXakSFlq

The festival, which is due to run over two weekends, was hit by bad news even before it kicked off.

Blink-182, one of the headliners, cancelled their performance at the festival at the last minute.

They told fans: ‘Regrettably, and after much careful and difficult consideration, we want to let you know that we won’t be performing at Fyre Fest in the Bahamas this weekend and next weekend. We’re not confident that we would have what we need to give you the quality of performances we always give fans.’

Revellers started to complain on social media as soon as they arrived claiming that cabanas were ‘actually disaster relief tents’, that people had started to fight over food, and that conditions were like those you would expect to find at a ‘refugee camp’.

That's right folks for just $10k, you too can have the "refugee fleeing war torn region" treatment at #fyrefestival pic.twitter.com/RqYzGq0Yg5

One attendee posted a photo on Twitter of two pieces of bread and some cheese – not the ‘chef-curated culinary pop ups’ that had been promised on the website.

Fyre Festival issued a statement on Instagram revealing flights to the festival had been cancelled after the ‘unexpected start’ also thanking ticket holders for ‘bearing with us as we attempt to accommodate guest needs’.

It confirmed that refunds were being organised, but there’s speculation that the entire event may be cancelled.

Ja Rule has yet to comment on the situation.