Raised in the infamous Grants Town community of Nassau, Bahamas, Lavar Munroe uses folklore and myth to challenge the stigma and predjudice associated with the ghetto. Often blurring the boundaries between painting, sculpture and installation art, Munroe challenges the status quo by contradicting societal norms and celebrating the underdogs of society. We found out more about this unusual young artist. 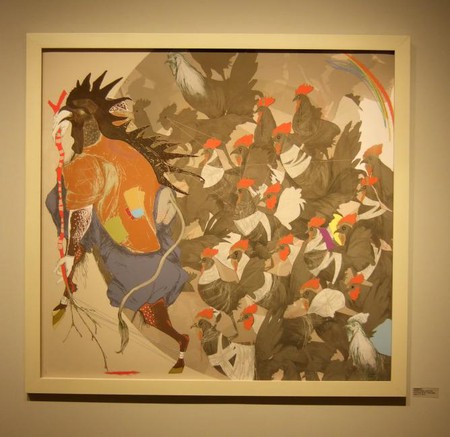 Born and raised in the impoverished and marginalized community of Grants Town, Nassau, Lavar Munroe moved to the United States in 2004 at the age of 21. A graduate with a Bachelors of Fine Arts from Savannah College of Art and Design, as well as a Master of Arts in Fine Art from Washington University in St Louis, Munroe is also an alumnus of the Skowhegan School of Painting and Sculpture. His complex, mixed-media works of art, which frequently confuse the boundaries between painting, sculpture and installation art, draw from his childhood experiences in order to explore the social stereotypes surrounding life in the ghetto. Currently based in Washington, his vibrantly colored works of art are reminiscent of the graffiti-strewn walls and buildings of his hometown.

Whilst he draws from personal experiences in order to create his art, Munroe is also heavily influenced by critical writings on mythology and literature. One key influence is Joseph Campbell’s monomyth of the hero’s journey, a theory which describes the basic pattern of stages found in many mythological narratives around the world. Munroe adapts these monomythical stages, as well as the tropes of mythology, the kings, queens, heroes, villains, gods and monsters, in order to create a personal mythology which confronts contemporary society and its stigmatization of the poor.

A Hero’s Journey to A Distant Land, His Brush With Death, His Slaying of a Monster, His Erotic Encounter and His Succession of His Father, which depicts a backwards rider on a horse, is a clear reflection of Munroe’s intentions. The title itself references many stages of the monomyth. Within the work, the celebrated return of a mythological hero is juxtaposed with the return of an ex-convict to society, the hero’s challenges and battles compared with the convict’s time spent in prison. Shank=Survival, a series of delicately constructed sculptures which also act as functional shanks, explores the role of prison as a ‘rite of passage’ for many of the ghetto’s inhabitants. The decorated and bejewelled shanks reflect the key stage of the hero’s journey, the moment before his adventure when he obtains an elaborate weapon, such as King Arthur’s Excalibur or the sword gifted to Perseus by Zeus.

Munroe’s desire to confront societal norms and challenge the status quo is reflected by his adoption of the artist-trickster persona. Disobeying conventions in order to challenge contemporary values and champion the disadvantaged, he likens this role to that of Robin Hood; however, his focus is not just on society’s treatment of the poor but also on the art market’s perception of worth. A Hero’s Journey to A Distant Land and Shank=Survival both incorporate kitsch objects, elevating them from discarded junk associated with poverty to commercial works of art. In doing so he challenges our definitions of sculpture, monument and art.

The artist-trickster persona is also present in Where Heroes Lay, a series of ‘bed’ sculptures that emerged from an exchange between Munroe and a homeless person. The artist-trickster periodically removed soiled cardboard from the homeless person’s sleeping quarters, replacing it with clean cardboard. The scavenged cardboard was then reconstructed, along with other discovered objects, into functional beds. In his service, Munroe assumes the role of the maid and casts the homeless person as the hero. The series is an examination of neglect and misfortune but it also demonstrates society’s potential for sympathizing with and treating its disadvantaged. By presenting the beds as consumer art objects, Munroe simultaneously challenges the art-market and mainstream society, and highlights the need for change.