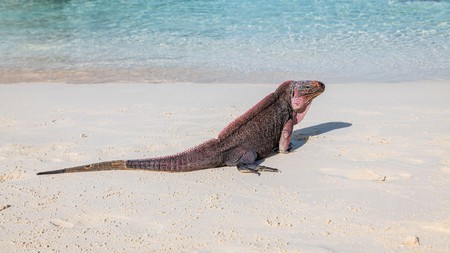 Swimming pigs might be the most famous living attraction in The Bahamas, but iguanas are the quiet stars of the show. Many Bahamian islands and cays are home to three endemic species, which have a thoroughly prehistoric look about them, with bright scaly skin and mohawk-style spines. One of the best sites to spot a “mess” (the term for a group of iguanas) – is Allen Cay, colloquially known as Iguana Island. Here we reveal the best way to explore this outcrop for an up-close experience with these harmless and critically endangered lizards.

Sail over to Allen Cay in The Bahamas and visit the wild iguanas by chartering a boat for the day through SamBoat. Alternatively, extend your adventure to a week-long sailing trip with Dream Yacht Charter.

Where is Allen Cay? 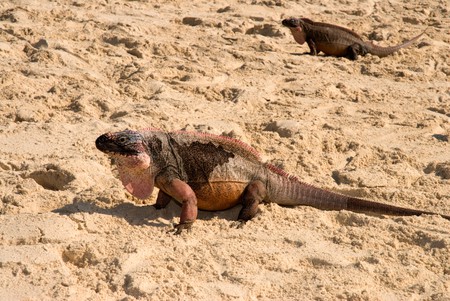 What is so special about the iguanas on Allen Cay?

Many islands throughout The Bahamas are home to the nation’s three species of rock iguanas. But the Allen Cays iguana (Cyclura cychlura inornate) – a subspecies of the Northern Bahamian rock iguana – is unique to Allen Cay and a few neighboring isles. Growing to more than 4ft (1m) in length, it’s a giant relative to its smaller cousins due to its diet of unusually nutrient-rich plants fed by guano, reflecting the cays’ status as home to the world’s largest colony of Audubon’s shearwaters. Grey-brown with uniquely pink highlights, these harmless lizards are threatened by poaching and supplemental feeding by tourists.

During high-season winter months, as many as 200 visitors a day descend on the Allen Cays to commune with and, alas, feed the iguanas. For a more private and peaceful interaction, try to visit in November or spring, and during the early morning or late afternoon before the cold-blooded reptiles retreat into their dens to sleep. If you land on Allen Cay in early- to mid-June you’ll witness female iguanas digging shallow nests in the sand to lay eggs, with newborns hatching out of them and clawing their way to the surface in late summer. 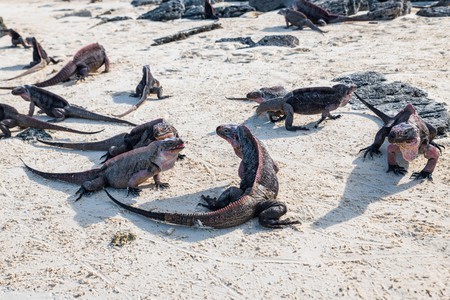 Top tips on visiting the iguanas in a responsible way

The Bahamas’ critically endangered iguanas are protected under the Wild Animals Protection Act. Regardless of whether you arrive on your own yacht or with an excursion group, treating these wild creatures with respect is critical to their long-term survival. Signs request that visitors do not feed the iguanas. Nonetheless, most tour operators disregard this and promote feeding the iguanas as a way of attracting and pleasing clients. When tour boats arrive, the herbivorous iguanas now congregate on the beach in expectation of being fed. Alas, the unnatural diet has led to adverse health issues and a disruption in their physiology and natural behavior. Do not feed the iguanas, regardless of what your guide may tell you. Also, try not to get too close as you could make them feel threatened. If visiting with your own yacht, do not bring any pets, as other non-native animals are banned from the island.

How to get to Allen Cay

Allen Cay can only be reached by boat. Sailors will find sheltered anchorages in the lee of Allen Cay and the horseshoe bay of Small Allen Cay; larger yachts can anchor in the west of the cays. Several local tour operators offer excursions from Nassau, but they all promote feeding the iguanas, which is to be avoided. Neighboring Highbourne Cay has accommodation and a marina offering boat rentals and guided excursions. An alternative is chartering a seaplane or helicopter to Highbourne Cay, or a fixed-wing charter to nearby Norman’s Cay. From there you can then transfer by boat to Highbourne Cay. 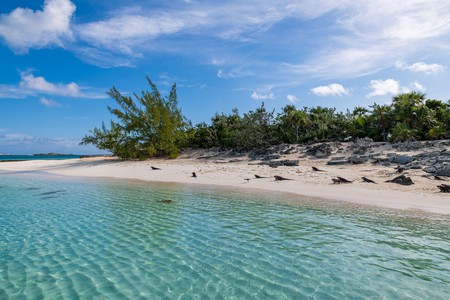 Allen Cay can only be reached by boat | © Giongi63 / Alamy

Where else to see iguanas in The Bahamas

Many middle and southern cays of the Exumas chain are home to the Exuma rock iguana (Cyclura cychlura figginsi), a smaller cousin of the Allen Cay iguana. Bitter Guana Cay, immediately south of Staniel Cay, is popular with local tour operators. The orange-brown San Salvador Rock Iguana (Cyclura rileyi rileyi), a distinct species with three subspecies, lives solely on remote San Salvador, Acklins Bight, and a few cays at the southern end of the Exumas. The third species, the Bobby Cay iguana (Cyclura carinata bartschi), exists only on tiny Booby Cay, off Mayaguana.
Go wildlife spotting all over The Bahamas by hiring a boat for the week through Dream Yacht Charter, or just rent a yacht for the day with SamBoat.