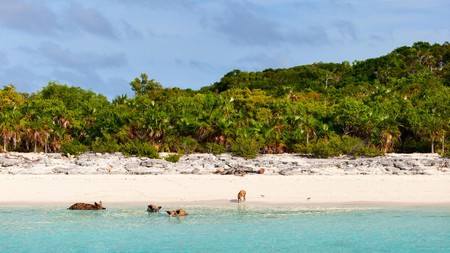 The biggest celebrities in The Bahamas are surely the adorable pigs and wee piglets that love to swim with visitors in the bathtub-warm ocean waters. There are now several Bahamian beaches where you can swim with pigs. But the original, and most popular, is a stretch of ivory-white sand in the Exumas known as Pig Beach. Here’s everything you need to know about visiting the #theswimmingpigs and snapping a selfie of your own playful encounter with these four-legged celebrities.

Navigate your way to Pig Beach by chartering a sail or motorboat through SamBoat. Alternatively, explore this island and other gems around the Bahamas on a multi-day sailing adventure with Dream Yacht Charter.

Where is Pig Beach?

Pig Beach is a gorgeous slip of pure-white sand on the west side of Big Major Cay, immediately northwest of Staniel Cay, in the Exumas – a chain of 365 isles and cays stretching north to south for more than 160km (100mi). Affectionately nicknamed Pig Island, the otherwise uninhabited Big Major Cay is populated by several dozen pigs, plus endemic iguanas and a few feral goats. 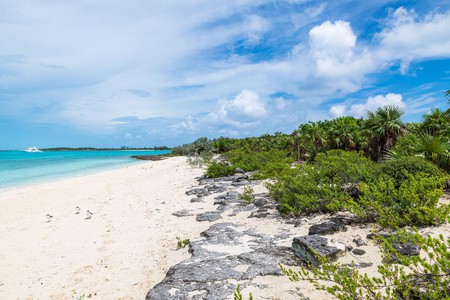 How did the pigs get to Pig Beach?

Although feral, the pigs aren’t native to the island. Many locals will tell you they were left there by pirates who planned to use them as food on future visits. Others say they swam to safety after a shipwreck. In fact, in 1992 two Staniel Cay residents, Wayde Nixon and Don Rolle, bought five piglets and placed them in a pen on Big Major Cay to breed for food. The porkers soon outgrew their confines, escaped into the brush, and bred more little piggies. When visitors landed on the cay and started feeding them, the pigs quickly learned to swim to boats in anticipation of food, and the rest is history. 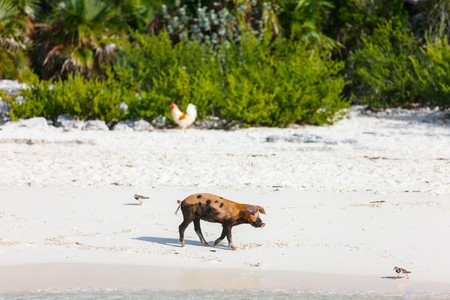 The celebrity status of the pigs draws swarms of tourists during the December to mid-April high season. Your one-on-one time may be limited. The less-busy shoulder seasons are the best times to visit. The islands are quieter then, and the weather is still fantastic. Most group tours arrive mid-morning and mid-afternoon. Sailors with their own yachts can time their visit to avoid the crowds, but should also avoid visiting the pigs at lunchtime or late afternoon: the porkers will most likely be taking a siesta after their feed.

How to visit the pigs in a responsible way

Signs on Big Major Cay inform visitors of rules and regulations for respectfully interacting with the pigs. While the swimming pigs are feral, they can appear as friendly as golden retrievers as they eagerly paddle out to greet you. Gently touching them is accepted here, but attempting to ride them or otherwise disrespecting them is not. Although feeding these four-legged eating machines is permitted, you may only feed them pitted fruits and vegetables, such as apples and carrots. And because ingesting too much sand can kill pigs, don’t place food on the beach; only feed them while you’re in the water. 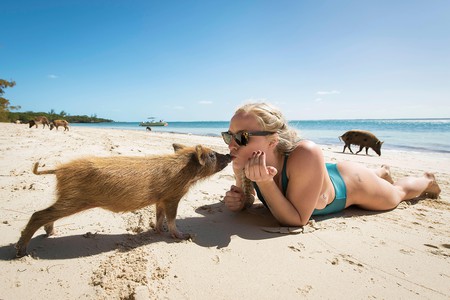 Though feral, the pigs will approach and interact with humans | © Cavan Images / Alamy

How to get to Pig Beach

Sailors can anchor off Pig Beach, just one mile from the yacht harbor at Staniel Cay. Exuma Water Sports offers full-day boat excursions from Great Exuma – a two-hour boat ride each way. From Nassau, the quickest way is with Bahama Air Tours, which flies you to Staniel Cay for a boat transfer to Pig Island with a local tour operator. Boat tours typically also visit Thunderball Grotto (named for the James Bond movie in which it starred); Bitter Guana Cay, to commune with endemic rock iguanas; Compass Cay, to swim with harmless nurse sharks; and the sunken drug-runner’s plane wreck off Staniel Cay.

Where else can you swim with pigs?

Half-day excursions from Great Exuma typically take you to White Bay Cay (no, not the same-named cay owned by actor-director-producer Tyler Perry), which also has swimming pigs and is only a 15-minute boat ride from George Town. Eleuthera also has a Pig Beach, at Meeks Patch, just minutes by boat from Spanish Wells. You can also swim with pigs on Grand Bahama – the highlight of a day-long excursion from Fort Lauderdale with Bahamas Shuttle Boat. And not to be outdone, tiny No Name Cay is endearingly nicknamed Piggyville by locals for its swimming pigs; it’s off the southern tip of Green Turtle Cay. Local tour operators offer excursions. 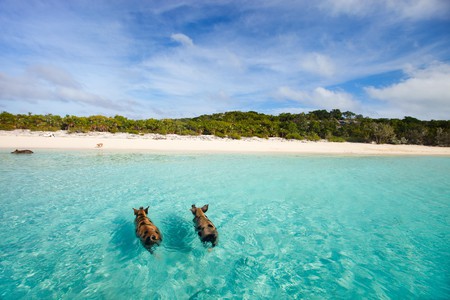 There are several places to swim with pigs in The Bahamas, but Big Major Cay is the original destination | © BlueOrangeStudio / Alamy

Sail over to Pig Beach in style by choosing from hundreds of boat charter options with SamBoat or cruise by on a multi-day sailing adventure in the Bahamas with Dream Yacht Charter.