How to Get to Dean's Blue Hole in the Bahamas, One of the Deepest in the World 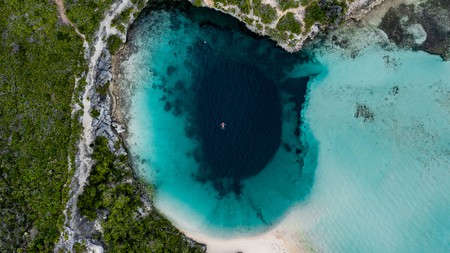 We’ve all seen Belize’s Blue Hole, and as spectacular as it looks, there’s no denying it’s also one of the world’s most crowded snorkeling and scuba diving destinations. Our advice? Avoid the crowds and head to Dean’s Blue Hole in the Bahamas, instead. You’ll find it on Long Island, which is wonderfully easy to get to, whether you’re basing yourself at one of the island’s homestays or passing by during a sailing trip. Here we reveal why you should add Dean’s Blue Hole to your itinerary.

See Dean’s Blue Hole in the Bahamas at your own pace by chartering a yacht for the day through SamBoat. Alternatively, explore further afield by hiring a boat through Dream Yacht Charter for a week. 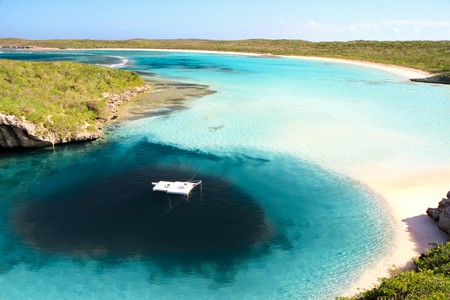 Dean’s Blue Hole is definitely one to add to the travel wish list. Why? It’s the world’s second-largest blue hole and it’s crammed with weird and wonderful marine life. It’s an incredibly popular snorkeling and scuba diving spot, but it also attracts a large number of freedivers, due to the brilliant visibility and the lack of currents. Unlike other blue holes, it’s not located out at sea but on the edge of an island and the shelter provided by surrounding cliffs ensures the water stays wonderfully calm.

What’s The Story Behind The Name? 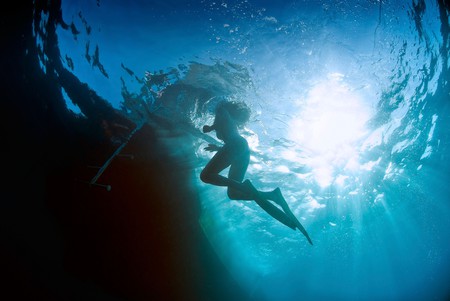 Blue holes earn their name because they’re exactly that – deep holes filled with seawater that take on a wonderful turquoise hue. As for the Dean bit? Nobody’s sure, although it’s suspected that it’s named after one of the first people to freedive inside it.

However, one of the most famous freediving accomplishments to take place there was actually achieved by someone called William Trubridge. In April 2010, this professional freediver broke the freediving world record by diving to 92m (302ft) without the use of fins. A few months later, he broke his own record and plunged to 100m (328ft) on just a single breath.

What Can You Do When You Get There?

As we’ve mentioned, Dean’s Blue Hole is a brilliant place for snorkeling, scuba diving, and freediving, but its unusual topography – complete with white sand beaches – means it is also an ideal sunbathing spot. But to make the most of a visit to Dean’s Blue Hole, you’ll really need to get wet. Dozens of local companies organize snorkeling and scuba diving tours, and several offer freediving taster sessions, too. It’s also the location for the annual Vertical Blue freediving competition, so if you’re lucky you’ll spot some of the world’s top freedivers doing their thing.

What Wildlife Might You See Around Dean’s Blue Hole? 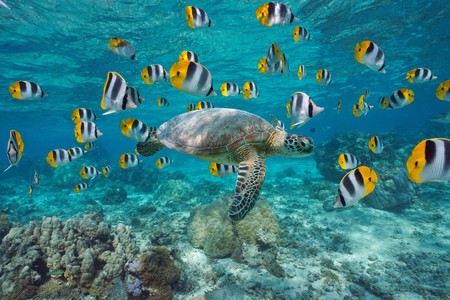 Whether you’re a snorkeler or a scuba diver, there’s a huge selection of species to check out, ranging from smaller creatures such as snappers and seahorses to huge shoals of rainbow-colored fish and larger fish such as groupers. It’s also a popular hangout for sea turtles, and in addition to the beautiful rock formations, there’s some gorgeous coral to admire.

The most spectacular coral is located around the rim of Dean’s Blue Hole, which means it’s easily accessible for snorkelers as well as scuba divers. The rim is also where you’ll find several sandbanks, which attract smaller species such as shrimps. 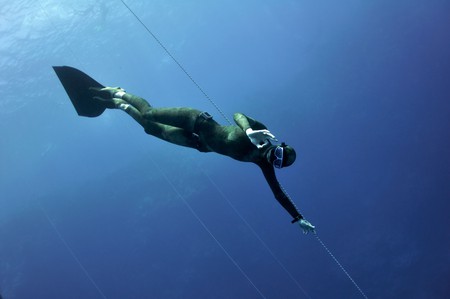 Several companies offer guided snorkeling and scuba diving tours to Dean’s Blue Hole, but its easy accessibility means it’s perfectly possible to explore it yourself. However, if you fancy trying your hand at freediving, we recommend signing up for a session with Vertical Blue, a dive school that runs courses in Dean’s Blue Hole for beginner and intermediate freedivers, along with training camps for a more intense freediving experience.

How To Get To Dean’s Blue Hole

Although it’s a popular stop-off for travelers on sailing holidays, you can also visit Dean’s Blue Hole on day trips from Florida. Most visitors get there by chartering a flight from Nassau airport to the smaller Deadman’s Caye Airport on Long Island, which is just a 10-minute drive from Dean’s Blue Hole. Both Bahamas Air and Southern Air offer flights to Long Island, but a word of warning: many flights also stop at Stella Maris Airport, in the island’s north, so make sure you don’t get off the plane at the wrong airport by mistake. The Blue Hole’s proximity to Clarence Town means there are plenty of accommodation options (most of which are self-catering villas) if a day trip just won’t cut it. Bear in mind that you won’t (thankfully) find any five-star resorts here – the island has a population of just 3,000 people and remains unspoiled by tourism.
Discover Dean’s Blue Hole and beyond by booking a week-long sailing adventure through Dream Yacht Charter, or rent a yacht for the day through SamBoat.