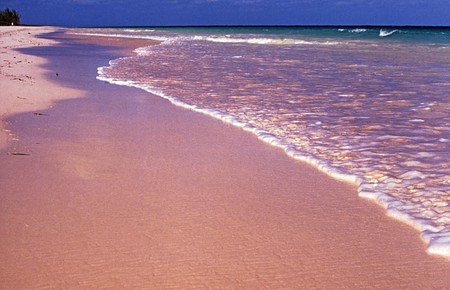 Harbour Island is one of the many small, inhabited islands that make up the coral-based archipelago of the Bahamas. The charming island lies just northwest of Eleuthera Island in the Bahamas and features several beaches, marinas and coral reefs like the Devil’s Backbone.

Harbour Island is famous for its stunning beaches and dramatically clear waters.

The pink color of the sand comes from microscopic coral insects, known as foraminifera, that live on the sea floor.

In my opinion, every day is a #beachday

@gcwinthrop going for a Thanksgiving swim!

If you ever hear locals refer to ‘Briland’, don’t get confused. It’s just a nickname they’ve given Harbour Island.

Harbour Island is made up of many outlying coral reefs, the most popular being Devil’s Backbone.

The natural caves that have formed along the beaches make for some of the most romantic spots on Harbour Island.

The only town on the island is Dunmore Town, named after the governor of the Bahamas from 1786 to 1798.

Harbour Island is part of the Out Islands of the Bahamas, traditionally referred to as the Family Islands.

The driftwood tree called ‘the lone tree’, located in the waters, is one of the most dramatic and unusual visuals on the island. Guests often climb up it and take photos.

10 years later, and this iconic tree is still around…on its side now 🙂

Snorkeling, diving and swimming are popular activities in the reefs of Harbour Island.

The reefs are home to a variety of marine life, including turtles, stingrays and jellyfish.

Blues gently tuck away behind the isles ..

There are a few resorts on the small island, each amazing and breathtaking. The most popular are The Landing and The Pink Sands Resort.

Harbour Island is one of the smallest islands that make up the Bahamas, with an estimated population of between 1500 to 2000 people.

I love Fall 🍁, but it is going to be hard to leave these beaches 🌊 #bahamas #hollywoodandmaverick #honeymooning @avillandry22

Although Harbour Island is small, there is a number of interesting buildings and sites, including the Princess Street Gallery.

Conch is the national dish of the Bahamas, so expect to find a variety of conch dishes and other seafood dishes on almost every menu at the restaurants on Harbour Island.