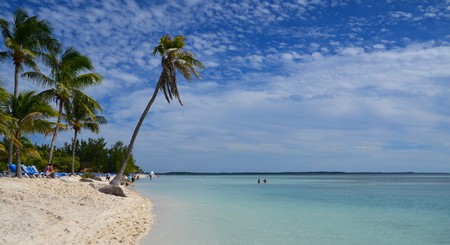 The Bahamas is ripe with artistic talent, and, whilst its art scene still needs time to reach maturity, a number of forward-thinking galleries and institutions are going to great lengths to support its art and cultural identity. Find out where to enjoy the best of Bahamian modern and contemporary art in our guide to the top art galleries within the capital, Nassau, and across the archipelago. 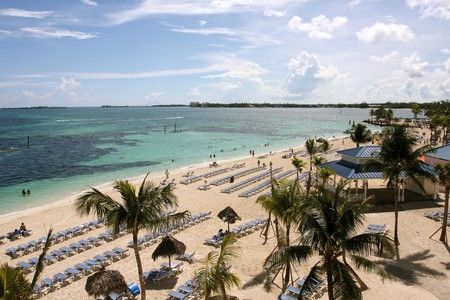 National Art Gallery of The Bahamas 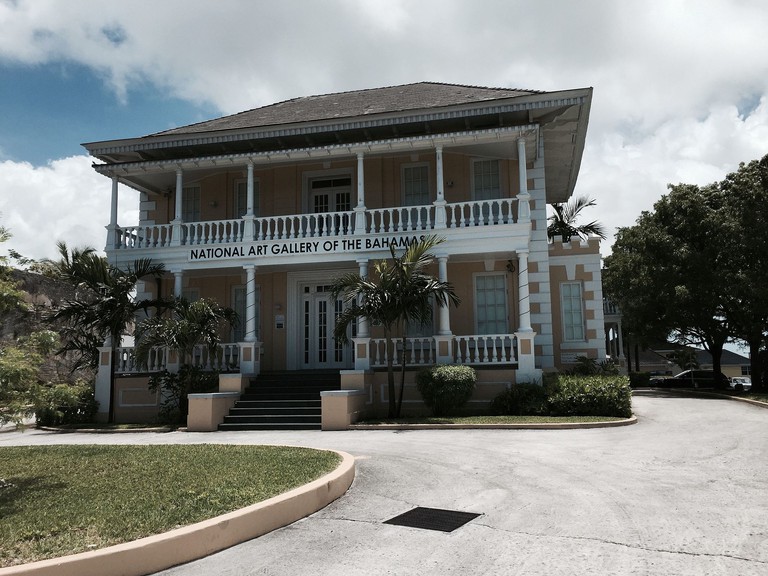 National Art Gallery of the Bahamas | © ArnoldReinhold/WikiCommons
Established in 1996 by parliamentary decree and inaugurated a few years later, the National Art Gallery of The Bahamas is the most prominent cultural institution in the country. Born with the mission to house the finest artworks produced by Bahamian artists, and show them to the public, this gallery is an integral part of the cultural history and identity of The Bahamas. Alongside the permanent collection of paintings, works on paper, sculptures, textiles, photographs and mixed media works, the museum offers a dynamic program of temporary exhibitions, arts education workshops and community projects. The NAGB is situated in the two-storey Villa Doyle, an outstanding piece of colonial architecture originally built in the 1840s.

Art Gallery, Market, Shop
Facebook
Email
Twitter
Pinterest
Copy link
Share
Doongalik Studios was founded in the 1970s out of the passion and devotion for the art of the late architect Jackson Burnside, and his wife Pam. Placing faith in the talent and quality of the many local artists, the gallery works towards the ambitious goal, set by Burnside, of presenting The Bahamas not only as an earthly paradise for vacationers but also a worthwhile contemporary art destination. The best time to visit Doongalik is on a Saturday morning, when a market of tropical fresh vegetables and fruits from local suppliers is formed as a complement to the gallery’s efforts in the preservation and promotion of the Bahamas’ identity through the fine arts.

Popop Studios is situated in two acres of land in Nassau’s historical district of Chippingham, with the main building surrounded by tall palms and lush vegetation. Reflecting the tropical, laid-back vibe of The Bahamas, over the years many local artists have gravitated to the colorful Popop Studios to form a lively artistic community that is much more inclusive than the traditional ‘white cube’ ambiance of international galleries. Popop Studios was founded by painter John Cox, a Nassau native and one of the best artists of his generation, and it represents a small group of select painters, sculptors and photographers of both local and international origins.

From the 1970s onward businessman Vincent D’Aguilar contributed largely to the economic development of The Bahamas with multiple successful enterprises. In doing so, D’Aguilar learned to appreciate local art and acquired fine examples, which visitors can now view at the D’Aguilar Foundation. The Bahamian collection, one of the largest privately-held collections of Bahamian art, contains 1200 works (mostly paintings) and provides a unique look at the advancements of Bahamian contemporary art over the last five decades. In addition, the foundation exhibits a smaller but no less captivating selection of international pieces by artists from all around the world, but with an emphasis on African art, and sculpture in particular.

The only downside to Liquid Courage Gallery is that visitors will have to ask for directions to the gentlemen selling alcoholic beverages downstairs. This gallery was established at the end of 2012 by the team of Liquid Courage Limited, a retailer and wholesaler of premium beer, wine and spirits based in central Nassau, out of the belief that “wine and art go well together”. Don’t be fooled though: despite its unusual genesis, Liquid Courage is a cutting-edge gallery which offers its space to local and international artists as a platform for them to present their (curated) exhibitions to a discerning audience. 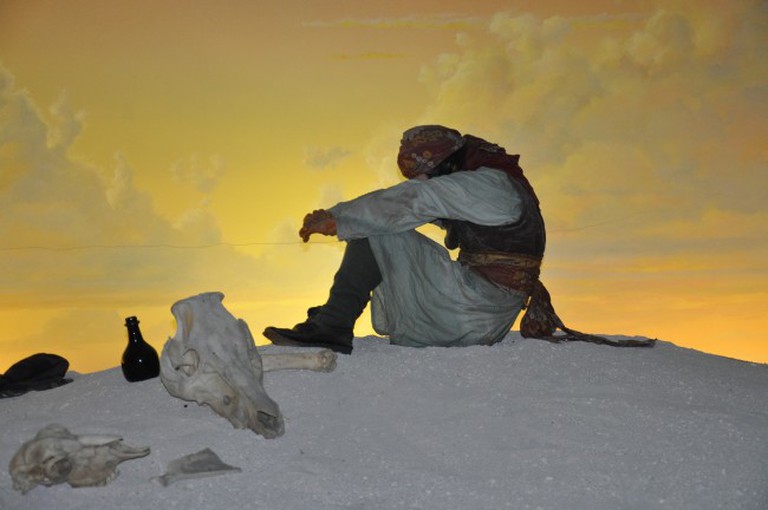 A wood and marble sculptor, Antonius Roberts recently relocated from his old studio and gallery to Hillside House, a 19th century mansion down Cumberland Street, an area dotted with period buildings in downtown Nassau. Roberts is one of the leading artists of the contemporary art scene in The Bahamas, and an important figure in the promotion of the arts across the country. Ten years ago, he was in the group of art professionals, which included Doongalik’s founder Jackson Burnside and Popop Studios’ founder John Cox, that conceived of Transforming Spaces, an annual, original event which takes visitors on a guided tour through the local art galleries in order to introduce them to the Bahamian art scene.

Art Gallery
Facebook
Email
Twitter
Pinterest
Copy link
Share
Proprietor and artist Wendy Cartwright lived on the Great Exuma cay, a pristine island in the southern Bahamas. Frustrated by the lack of a permanent exhibiting space in which to view the artworks of the many local talents she knew, she decided to open up the Wenshua Art Gallery in the city of George Town. Artists from all across The Bahamas are also exhibited here, housed in a quaint colonial building. This little gem of a gallery presents an array of exquisite paintings, sculptures, photographs and craftworks. Unsurprisingly, many are inspired by life on the island, with the ocean featuring in more than just a few of them. 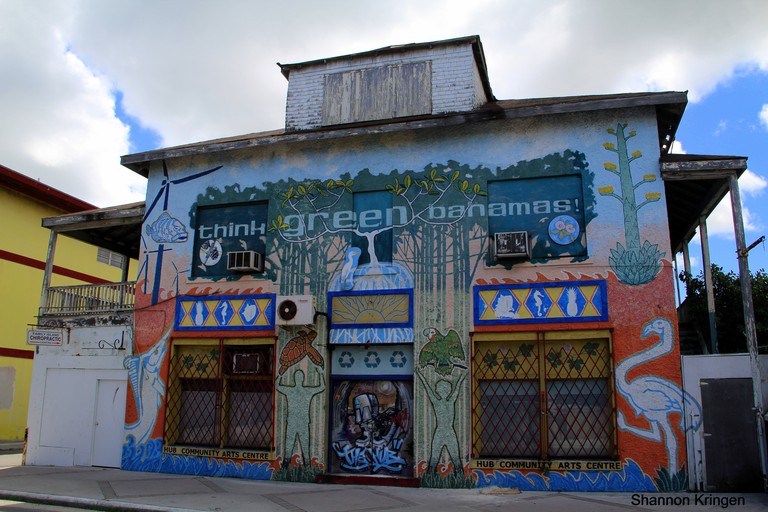 The HUB, Bahamas | © Shannon Kringen/Flickr
Located in Nassau’s urban heart is The HUB, a contemporary art gallery showcasing the works of local artists in temporary exhibitions. This is an artist-run exhibition space with a solid, community-inclined approach. The gallery team is open to ideas coming from anyone who might be interested in having a show at The HUB, even organizations not active in the art industry. In addition to art exhibitions, The HUB offers film screenings, live music, theater shows, workshops and many other collateral activities. One noteworthy artwork is the big, awe-inspiring mural painted all over the gallery’s facade, with an environmentalist theme and a clearly stated message: ‘Think Green Bahamas’. 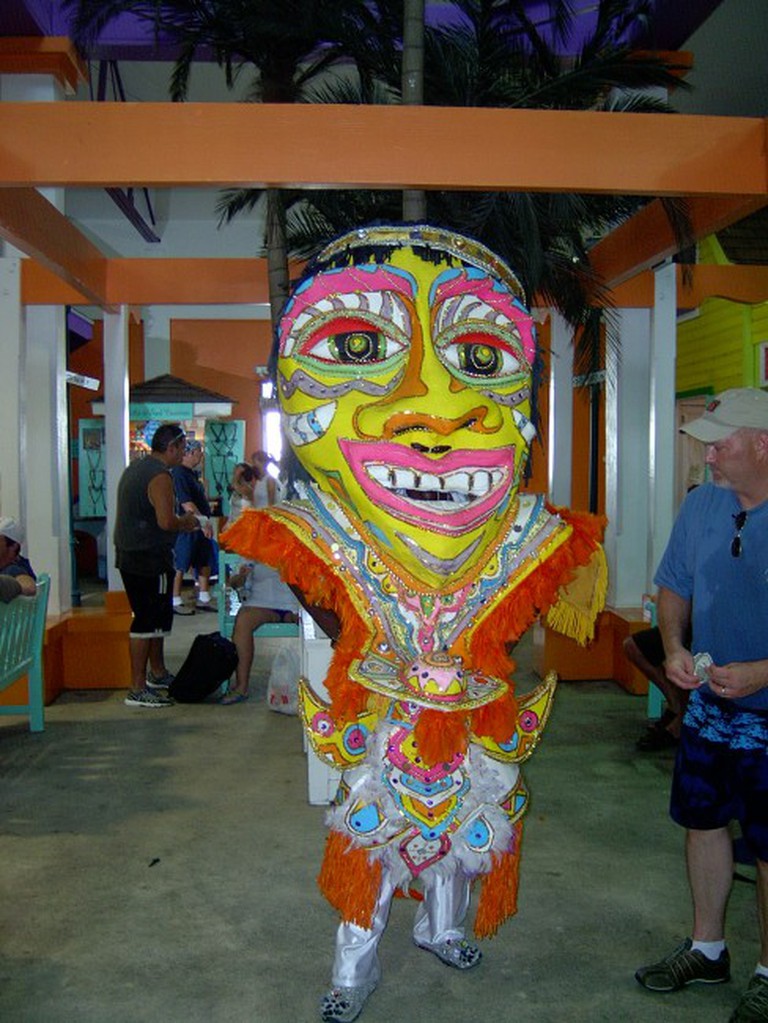 Junkanoo Dancer | © Mike Burton/Flickr
Every 26 December and 1 January, Nassau’s central Bay Street is inundated, from the early hours in the morning until dawn, by streams of cheering Bahamians parading down the street dancing to the rhythm of upbeat music, cowbells and whistles. They celebrate Junkanoo, a carnivalesque parade which has its roots in the country’s past of slavery (slaves used to have only those two days off a year). The Junkanoo Expo museum displays a collection of the exuberant, colorful masks and costumes Bahamians wear on the festive occasion. These items can be so intricate and sophisticated that they have become genuine pieces of folk art.

The Hummingbird Cottage Art Centre might be one of the most remote art galleries in the world. The center is found in Hope Town, a district with roughly 500 inhabitants which is part of the Great Abaco archipelago in the northern Bahamas. Despite the challenging geographical location, Hummingbird represents a group of talented painters, however small, whose work is strongly inspired by the distinctive natural and urban landscape: the picturesque colonial houses, the leafy palms, the lush, colorful flowers. Hope Town’s art center is situated inside two lovely, quirky wooden cottages with pink walls, specifically constructed to host the center, and is engaged in a program of art classes and workshops geared towards the local community. 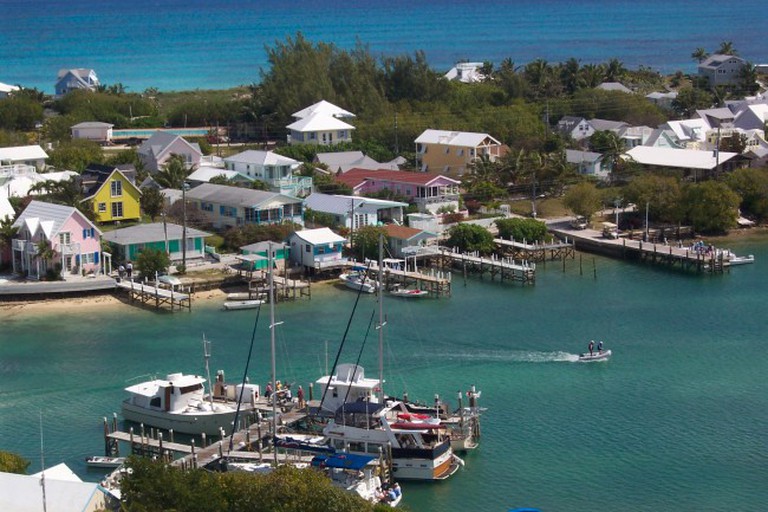