The Caribbean island St. Martin is home to Sir Roland Richardson, the father of Caribbean Impressionism. Even though his art is rooted in the Caribbean, art students around the world know him for his mastery of multiple mediums and his impressionistic landscape paintings of his homeland. 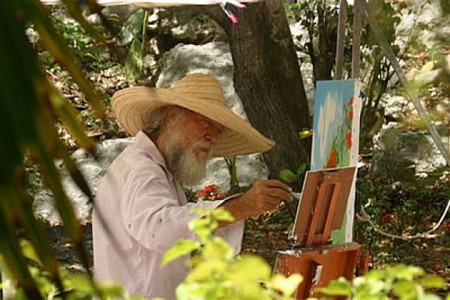 The 19th-century art movement Impressionism began in Paris and was concentrated on conveying the immediate visual impression of the world, utilising small but bold brush strokes, contrasts of colour, and ordinary or familiar subject matter. First criticized for being a naive and trivial approach to art, it spread around the world and influenced the development of other forms of media. Initially, the Impressionist style was seen to violate the traditional rules of painting.

The Impressionists preferred free brush strokes over attention to specific details and definition and often painted ‘en plein air’ (outdoors), a technique that captured the true effects of the sunlight and environment. Famous artists such as Monet, Renoir and Degas used Impressionism to capture moments of illumination with their artwork, and once its public perception changed other artists such as Gauguin, Van Gogh and Seurat followed.

Sir Roland Richardson of St. Martin is another prominent artist within the Impressionist movement. He is currently one of the Caribbean’s most respected artists and is someone who embodies the impressionist technique in all of his work and persona. While he maintains a ‘simple life of genuine focus’, his artwork receives international recognition for revealing ‘true symbols of the region’s beauty and rich culture’ and he is now considered a leading artist in the School of Caribbean Art. Using original oil, watercolour, pastel, charcoal, etching, engraving, woodcut and drypoint, his pieces are always created on location and are often of a living subject. As described in the Caribbean magazine Reallife “he can often be found perched atop a bluff overlooking the Caribbean Sea, paintbrush poised”. In 2007 Queen Beatrix of the Netherlands knighted Richardson and he has also received a lifetime achievement award from the French government.

Richardson was born in 1944 and comes from a French Caribbean background. His work celebrates colour, light, flora and the people of St. Martin and is now displayed as an ongoing exhibition in a 19th-century Creole townhouse in Marigot, the French capital of St. Martin. The Marigot gallery, a two-story home with a garden, dates back to his European family’s early settlement. His great grandfather was the mayor of French St. Martin, and the house was originally the town hall. Now, the gallery has bright red shutters, a concealed garden courtyard, stone-laid walls and a rich dark wood balcony that is the perfect entry point for a journey into Sir Roland Richardson’s artwork which preserves the image of the Caribbean as being a paradise and leaves the viewer with an impression of nature and colour.