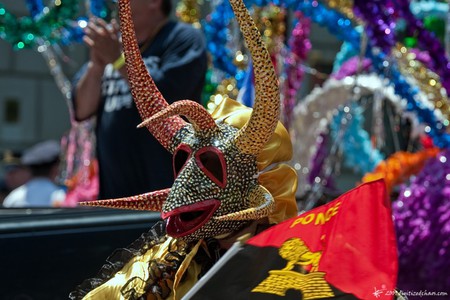 Vejigante festivals are celebrated throughout the island of Puerto Rico, but no place has the pageantry and passion like they do in Ponce where the vejigante mask has been artfully created and worn in honor for more than 300 years. Today the Carnaval de Ponce is held in February and coincides with Lent, as do most carnavals around the world.

History of the Vejigante Mask

The origins of the tradition go back to 12th century medieval Spain. The vejigante represented the evil Moors who were defeated by St. James. People dressed as demons (vejigantes) in a procession thrown to honor St. James.

In the 17th century the vejigantes began to more generally represent good v. evil. In Puerto Rico, the Taino culture is also a part of the festival, and the vejigantes are heavily influenced by music, more specifically bomba and plena.

The mask itself is known as a “máscara careta,” which literally translates into “grimace mask”, and poignantly describes the scary look on its face. The vejigante is the person in costume who carries a vejiga (cow bladder) gigante (giant). The cow bladder is inflated and dried in the sun, then filled with seeds or beans and the vejiga is used by the vejigante as a “weapon” during the parades and celebrations, as they playfully bop people with the rattle. Today, manufactured store-bought rattles are used. As with other Carnaval celebrations, the Vejigante Festival in Ponce is a burst of color. You are surrounded by not only the masks, but incredibly ornate costumes that glitter and mesmerize. 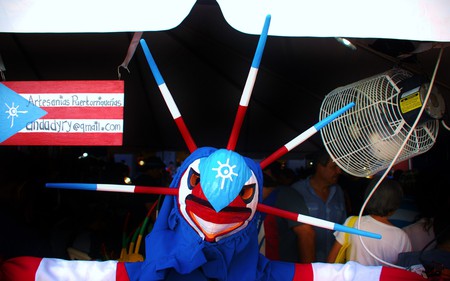 The Making of a Vejigante Mask

Many methods of making the masks have been developed over the years. In some cases the mask is made from coconut or gourds, but the ones worn in the Ponce festival are predominantly papier-maché. Even this has changed over the years. Miguel Caraballo, lifetime resident of Ponce, started making masks when he was a boy. He uses a concrete mold for the head, fiberglass molds for the horns, and then uses pencils and hooks for teeth. The paper he uses is always newspaper and brown paper bags. Caraballo starts with a dry layer of paper, using the “glue” of flour and water only on the overlapping edges to secure them. This results in ease of removing it from the mold. He then puts on layer after layer of paper until he has it just as he wants it. He adds the horns and teeth in stages. After each stage the mask must dry thoroughly in the sun. His method keeps the mask a bit lighter in weight. After the mask is complete and dry, it is painted. The dots and stripes are very important on the masks used in the Ponce festival. Some of Caraballo’s masks have been displayed in the Smithsonian.

Today, mask-makers will sometimes use plastic gallon milk jugs as their mold and papier-máche over them, but these are not form-fitting and can be uncomfortable, used more for display than wearing. For a better fit, artists will use foil to make a mold of the person’s face, and then add the layers of paper to that.

No matter the method, vejigante masks are stunning works of art and adorn many walls in Puerto Rican households. Consider a trip to Ponce in February to experience Carnaval de Ponce, a visit you will never forget.