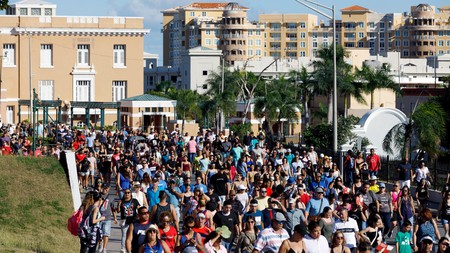 Puerto Rico cuisine – cocina criolla – draws on a unique blend of historical influences – indigenous Taíno, African and Spanish – and a melange of ingredients from the New World and the Old World, resulting in one of the most diverse and exciting culinary scenes in the Caribbean. Throughout the year, Boricuas (Puerto Ricans) celebrate Puerto Rican food culture via the best food festivals across the island that honor everything from pineapples and crabs to indigenous heritage and superstar chefs. Visit one of these amazing food festivals to get a real taste of Puerto Rico.

Unofficially marking the end of the winter festivities, this much-anticipated foodie event takes over Old San Juan in general and Calle San Sebastián in particular. The best places to eat in Puerto Rico throw open their doors, stages pop up in the plazas and the streets rock to the beat of live bomba and salsa in – while revelers chow down on mofongo (mashed and fried plantains with garlic and fried pork skin), quesitas (cheese-filled pastries) and alcapurrias (deep-fried green banana fritters stuffed with seafood). They’re all exemplary ambassadors of Puerto Rican street food. 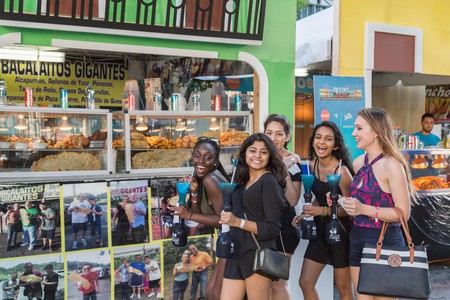 The smell of roasting beans – an olfactory announcement of festivities– will greet you even before you reach the mountain town of Maricao, as you make your way along the switchbacks of the scenic Ruta Panorámica through the often foggy greenery. Taking place in mid-February, this festival is dedicated to the superlative beans grown on small-scale coffee plantations on the town’s outskirts. Coffee-making demonstrations and tastings take place against the backdrop of craggy peaks and the greenery of Puerto Rico’s largest state forest.

If you’re a rum fan, check out one of the world’s largest annual rum festivals. Book into one of the best hotels in San Juan and make your way to Pier 6 in Old San Juan to partake in masterclasses, tastings of over a dozen local rum brands – think Bacardi, Don Q, Palo Viejo and Ron Llave – and the sampling of classic Puerto Rican dishes from restaurant-sponsored stalls, all to a soundtrack of live rock, salsa and batucada.

The largest food festival in the Caribbean, Saborea brings together Puerto Rico’s hottest chefs at varying venues around San Juan for a culinary extravaganza. Expect inspired takes on Puerto Rican dishes – in past years, festivities have included Bubbles & Bites food and drink pairings and a sit-down Culinary Stars Dinner, with each chef cooking for a table of 10 lucky attendees. Add more class to your weekend by checking into one of the best luxury hotels in Puerto Rico nearby.

The full repertoire of Puerto Rican food just isn’t complete without the island’s national cocktail: the Piña Colada. Stay in Ponce – less than an hour’s drive from La Parguera – a small, mangrove-fringed community on the island’s south coast where the annual pineapple fest takes place over the first weekend in June. Tour nearby pineapple farms, sip piña coladas, – served in hollowed-out pineapples – and load up on pineapple-themed souvenirs, as well as actual pineapples.

If you happen to see someone in a crab costume scuttling along the Guánica malecón (waterfront promenade) on the second weekend in June, that’s only because they’re the mascot of the annual crab festival. Take part in this epic consumption of stewed crab, mofongo with crab, deep-fried crab croquettes and roasted crab served in the shell – before dancing to live salsa tunes late into the night. Some people share the crab dishes with loved ones, but we’re guessing you’ll be too shellfish to share.

More than 60% of Puerto Ricans can trace their ancestry to the Taíno people – the original inhabitants of the island. Held mid-month in November, Jayuya celebrates the region’s indigenous heritage through traditional games, crafts, music and, of course, food. You may not win the “Miss Taíno” pageant, but you may sample Puerto Rican dishes rooted in the centuries-old Taíno tradition – such as barbacoa fish cooked over a fire pit, fritters made from the endemic yautía tuber and pickled cassava.

First, make some Puerto Rican friends. If you’re lucky, they’ll invite you over to spend Christmas Eve with them and feed you some of the best food in Puerto Rico – such as lechon suckling pig, rice with roast pork, sofrito and pigeon peas, slow-roasted pork shoulder, pasteles, the Puerto Rican take on tamales, steamed in banana leaves and arroz con dulce (rice pudding with coconut milk and spices). Wash it all down with a bounty of coquito – a coconut-based eggnog. Salud.