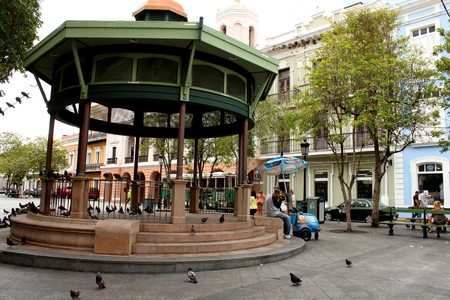 All over Central and South America, as well as the Spanish West Indies, almost every city has a central plaza, and every plaza is unique in the era, style, and geographical location in which it was built. However, no matter where or when they were built they all have similar reasons and uses for their construction.

The history of the plaza

Santo Domingo 1502 (Dominican Republic) and San Juan 1509 (Puerto Rico) were the first two towns built in the New World. Although both cities were built around a plaza, it wasn’t until 1513 that King Ferdinand decreed that all cities will have a central plaza, which will include a church and a sequence of streets so that the city will grow out from the center in an orderly fashion. 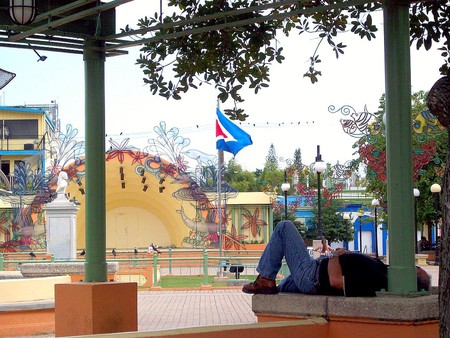 The churches of the plaza

Up until 1898 Catholicism was the national religion in Puerto Rico, and so almost all plazas have huge Catholic churches that anchor the town plaza. The plaza was also the place where the town market and businesses were located so that they were central to the town. Many of the town’s administrative buildings were either on the plaza or just off it. From the center the homes that were built were for the wealthiest citizens, and then moved outward from the plaza to the poorest citizens on the outskirts. Most plazas are built in a rectangular shape and were used as a promenade, a place to stroll and to be seen. 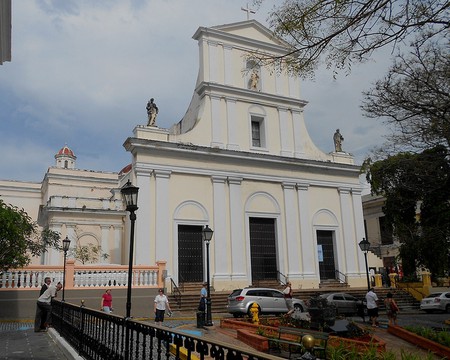 A look at today’s plaza

Today plazas are used in much the same way. The Catholic Church still dominates the town square and many municipal buildings still ring the plaza. In most central plazas today you will find a wide variety of restaurants and places for refreshments. There can be anything from fine dining to food stands with delicious pinchos. Plazas have huge shade trees where people gather to rest and visit. Some plazas have band shells and stages for free music and shows. Some like the Ramón Emeterio Betances Plaza in Cabo Rojo have bohíos were people play dominoes and have tournaments. There is usually an assortment of kiosks as well. The Plaza Christóbal Colón in Guayama has 16 gardens, while the Plaza de Armas (San Juan), Plaza las Delicias (Ponce), Plaza de Recreo (Rio Grande), Plaza Manuel Corchado y Juarbe (Isabela), and Plaza Christóbal Colón (Guayama) have fountains.

The people of Puerto Rico are a very laid-back, social people, so the cool, relaxed atmosphere of a shady plaza makes it the perfect place for people to meet. Because of the makeup of the plaza with its shade, churches, restaurants, coffee shops, pharmacies, medical offices, and city buildings, it is the “one-stop shop” for citizens, and they catch up on the latest news while they are there. 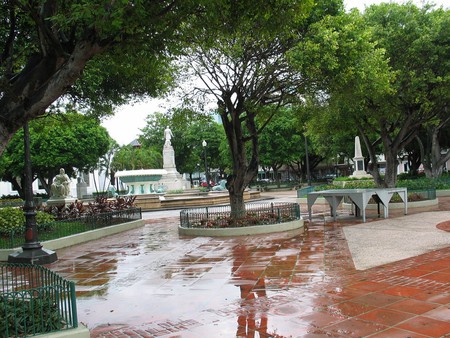 Almost every municipality has a festival to celebrate their heritage or industry or their patron saint, and the central plaza is almost always the site of these festivities. Families gather to listen to music and dance, meet new friends and catch up with old ones, and food and drink abounds. Occasionally during the holidays the municipality will host a free pig roast or other feast for its residents. When Puerto Rico played the US in the final game of the 2017 World Baseball Classic, the city of Cabo Rojo set a big screen up on the stage of the band shell and streamed the game so everyone could see it and cheer together.

Plazas are truly a great way to relax and enjoy the island atmosphere while getting to know the area and making some new friends. If you are fortunate enough to spend some time in beautiful Puerto Rico, make sure you visit the plazas of a few towns and cities. You won’t regret it.