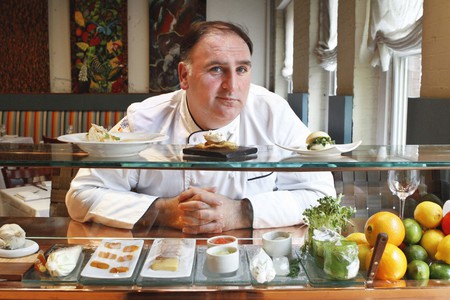 As of Monday, he’s served nearly twice as many meals in Puerto Rico than the Red Cross has. Now that’s putting fame and power to good use.

José Andrés, the Spanish-born and Washington D.C.-based gourmet chef with more than a dozen restaurants throughout the U.S., should officially be considered a bona fide American hero. As of this past Monday, Oct. 16, he and his nonprofit World Central Kitchen team hit a massive milestone: They’ve now served more than one million meals in Puerto Rico, which was devastated by Hurricane Maria in mid-September. For comparison, the Red Cross has served 540,000 meals and snacks, reports the Washington Post.

After Hurricane Maria left most of Puerto Rico without electricity or access to clean water, and American government disaster-relief agencies were slow to mobilize effectively, chef Andrés flew down to the island, arriving Sept. 25. He quickly linked up with local chefs to start cooking and distributing hot meals to the island’s hungry residents.

In the three weeks since then, he’s commandeered the kitchen of the country’s largest stadium and has set up 14 other kitchens around the island, with a fleet of food trucks also at his disposal. More than 500 people volunteer each day. As of October 14, Andrés was overseeing the cooking and distribution of more than 100,000 meals per day—a number that continues to increase.

Busy Saturday @WCKitchen operation center! We take orders, fulfill & deliver. 100,000 meals! This is the largest restaurant in the world!! pic.twitter.com/xr5FuwtcNA

He and his team are cooking hot meals—hard to come by when 85 percent of the island is still without electricity—and are making things like paella and arroz tripleta, Andrés’ posts on Twitter show. The team also gives fresh fruit, yogurt, and water with each delivery. FEMA has distributed more than 14 million meals, it says, but those are mostly cold MREs, not freshly prepared meals like the ones Andrés and his volunteers are cooking up.

Yesterday #ChefsForPuertoRico sent a pop-up paella team to Humacao to serve 5,000 hot meals!! We are doing these all around the island! 🥘 pic.twitter.com/n13rw8l3QX

This is at a time when Trump has largely failed Puerto Rico, lashing out at its mayor on Twitter and threatening to discontinue government aid to the American island. Meanwhile, Andrés promises the Post that his team will stay in Puerto Rico until the island’s residents have the ability to sustain themselves. Their efforts are being supported by donations, both private and corporate, to World Central Kitchen.

“The reality here is very hard to escape. My question is, if we don’t do it, who’s going to do it?” Andrés commented to the Post. “We never wanted to be here for so long… But circumstances invited us to be part of it.”