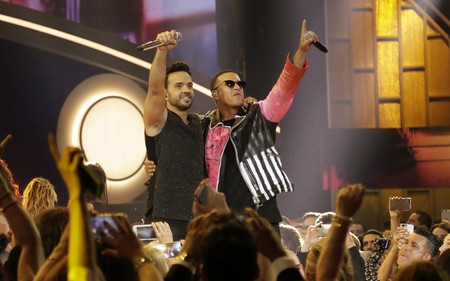 Released back in January, “Despacito” was finally crowned king of the Hot 100 after topping both the Streaming Songs and Digital Song Sales lists for the week ending May 11, scoring 54.3 million U.S. streams and 104,000 downloads. The meteoric rise comes in the wake of the Puerto Rican artists’ Bieber-assisted remix that was released on April 17, accounting for “73 percent of the song’s sales in the tracking week,” according to Billboard.

Since the Hot 100 began on Aug. 4, 1958, there have been 1,065 no. 1 tracks including “Despacito.” Before “Macarena” dominated all of 1996, Los Lobos’ remake of Ritchie Valens’ “La Bamba” became the first song with the majority of lyrics in Spanish to lead the Hot 100, and in total, only seven mainly foreign language songs have ever been able to claim such an achievement.

“It feels amazing to know that a mostly Spanish song is No. 1. Language isn’t a factor. Music unites us!” Fonsi told Billboard.

Daddy Yankee also shared his reaction with the publication, saying, “We are crossing cultural barriers and unifying the world through music.”

Check out the Bieber remix of “Despacito” below, as well as the song’s original music video.