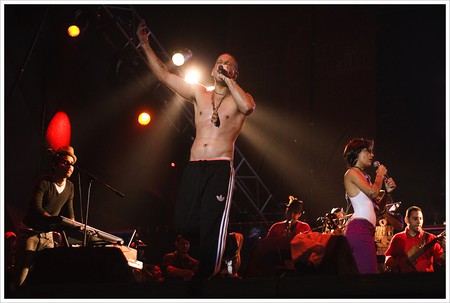 In a rhythmic monotone, René Pérez Joglar, known as Residente, tells the story of Latin America. Whilst taking pride in the land and its peoples, it also offers, chant-like, a critique of government both Latin American and foreign. “Latinoamérica” is also a claim for the inclusion of Puerto Ricans, officially still an unincorporated territory of the United States, among other fellow Latin Americans.

The opening line of the song is “Soy lo que dejaron, soy toda la sobra de lo que se robaron” (I am that which you left behind, I am all that’s left of what was stolen). Towards the end, Calle 13 alludes to the clandestine operation by governments of Latin America–often with the support of the U.S.–to silence their socialist and communist movements. “La operación cóndor invadiendo mi nido” (Operation Condor invading my nest), they cry, “Perdono pero nunca olvido!” (I forgive but never forget!).

Calle 13 is made up by Residente, his stepbrother Eduardo Cabra Martínez, known as Visitante, and their sister Ileana Cabra Jogler, PG-13. Many of their songs carry strong political overtones, including support for the Puerto Rican independence movement. “Querido F.B.I.” (Dear F.B.I.) was written to protest the 2005 killing of Filiberto Ojeda Ríos, a Puerto Rican revolutionary.

While not as politically controversial as “Querido F.B.I.,” Calle 13 are certainly not shying away from their criticism of the U.S. or their pride in being Latino American.