10 Traditional Dishes You Have to Try in Puerto Rico 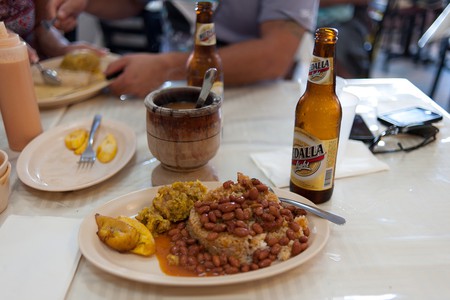 One of the best ways to learn about a country and its culture is through the cuisine – not only is it informative, it’s a delicious approach too. Traditional Puerto Rican food is heavily influenced by its African, Taino (indigenous) and Spanish roots, along with key ingredients found on the island. Take a look at these traditional dishes that distinguish Puerto Rican cuisine.

Similar to other dishes on this list, the main ingredient in mofongo is the green plantain and it is often accompanied by some type of fish, beef, or chicken. The plantain is cut up and the pieces are fried, then crushed and molded into the shape of a bowl, sometimes hollow on the inside. When hollow, the meat (fish, beef, or chicken) is placed into the middle of the plantain and if the plantain is kept whole, the meat is placed on or around the mound of plantain. Mofongo can be found at many restaurants and various food trucks. 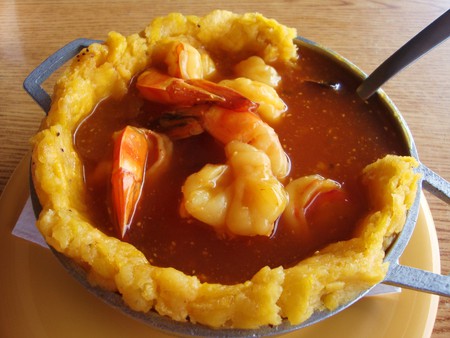 Tembleque is a form of coconut pudding that derives its name from the word “tiembla” which means shakes – and the dessert does indeed do just that. To cook tembleque coconut milk, cornstarch, salt, and sugar are needed, according to the Goya recipe. Cook and stir repeatedly until the mixture is smooth and thick, then refrigerate for 3 to 48 hours, and flip over out of the pan once done. Then add a topping of your choice.

A rice dish that is often made with green peppers, olive oil, cilantro, beans, tomato sauce and onions – mamposteao is relatively easy to make. The ingredients are mixed and then added slowly to be cooked in one pan. Mamposteao is also available to order in many restaurants and from some food trucks.

A very popular food, bacalaitos are called fried codfish fritters in English. Made up of boiled codfish (that has been shredded, de-boned and skinned) and a batter of flour, Adobo (seasoning), baking powder and water, bacalaitos are fried in a pan until fully cooked. They can be bought from kiosks throughout the island.

Alcapurrias are deep-fried stuffed fritters, as seen in the photo below. The outside is commonly made of green plantains or yucca, while the stuffing on the interior tends to be beef or pork. Like bacalaitos, alcapurrias are typically found in kiosks, especially those road-side. 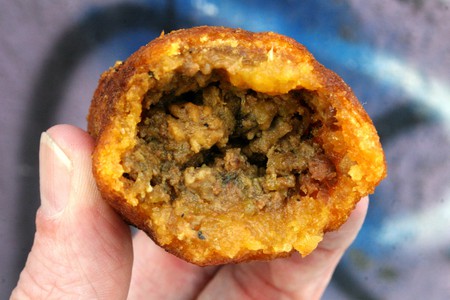 Asopao is a rice stew that usually includes chicken with vegetables that have been cooked until softened, and mixed with seasoning, chicken broth and rice until all of the ingredients are cooked. Don’t throw away the broth when eating, that’s an important part of the dish.

Green plantains are grated into small pieces, which are then assembled into the shape of a bowl, not unlike the way that the plantain is shaped in mofongo. The grated bowl is then fried until fully cooked and then filled with cooked meat. Arañitas can also be made flat, similar to tostones.

Another dish predominantly made of green plantains, tostones are slices of plantain that have been fried, flattened using a tostonera, and then fried once more. Various dipping sauces typically accompany an order of tostones, with the most popular being a blend of ketchup and mayonnaise called mayoketchup, pictured below. 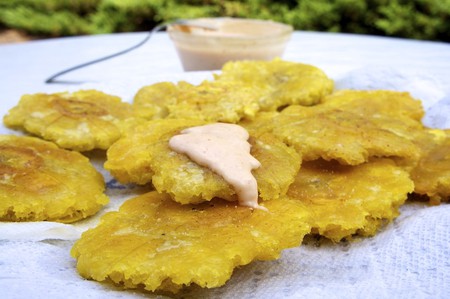 Pasteles are made up of yucca or green banana stuffed with meat or pork. The pasteles are wrapped in green banana leaves and boiled until ready and then the leaves are peeled off – not eaten! Pasteles are a staple at Christmas time and are also served in some school cafeterias.

Arroz con dulce is a form of rice pudding that is made by soaking rice for a couple of hours and coconut cream or milk, that is boiled twice with various spices. Next raisins are added before the rice is left to absorb the water in the pan and left to cool. Lastly, cinnamon is sprinkled on top. This dessert is usually enjoyed cold after being refrigerated.

When preparing or eating any of these dishes remember that meat is often seasoned with Adobo and that plantain peels and green banana leaves aren’t consumed, even if they’re used in the cooking process.