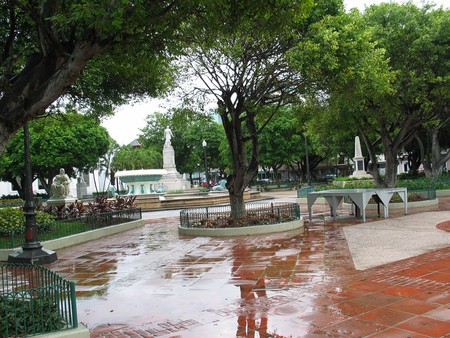 Ponce, La Perla de sur, the Pearl of the South, is the second largest municipality in Puerto Rico. This city is teeming with cultural events like the Carnaval de Ponce held every February, history, art and music museums, incredible architecture, the boardwalk at La Guancha, and food and drink that will blow you away. Book a room at one of the astonishing hotels on or near the plaza and spend a week just exploring Plaza Las Delicias, the Plaza of Delights. Las Delicias is actually made up of two adjacent plazas, Munoz Rivera Plaza on the north and Degetau Plaza on the south.

Not only is Hotel Meliá the oldest hotel in Puerto Rico, it is a history of architecture itself. The hotel was originally built under Spanish sovereignty in 1895, and then enhanced by three different architects at three different times; 1915, 1949 and 1960. Meliá has beautiful views of the city, particularly from the Panorama Sky Lounge on the roof of the hotel, and is a popular spot for wedding photos. The rooms are elegant, with only some of the rooms being a little dated, but are always very comfortable and clean, and the current owners are constantly doing updates to the entire hotel. Try Mocha Coffee Bar and Bistro for a fabulous breakfast/brunch/lunch, also onsite. 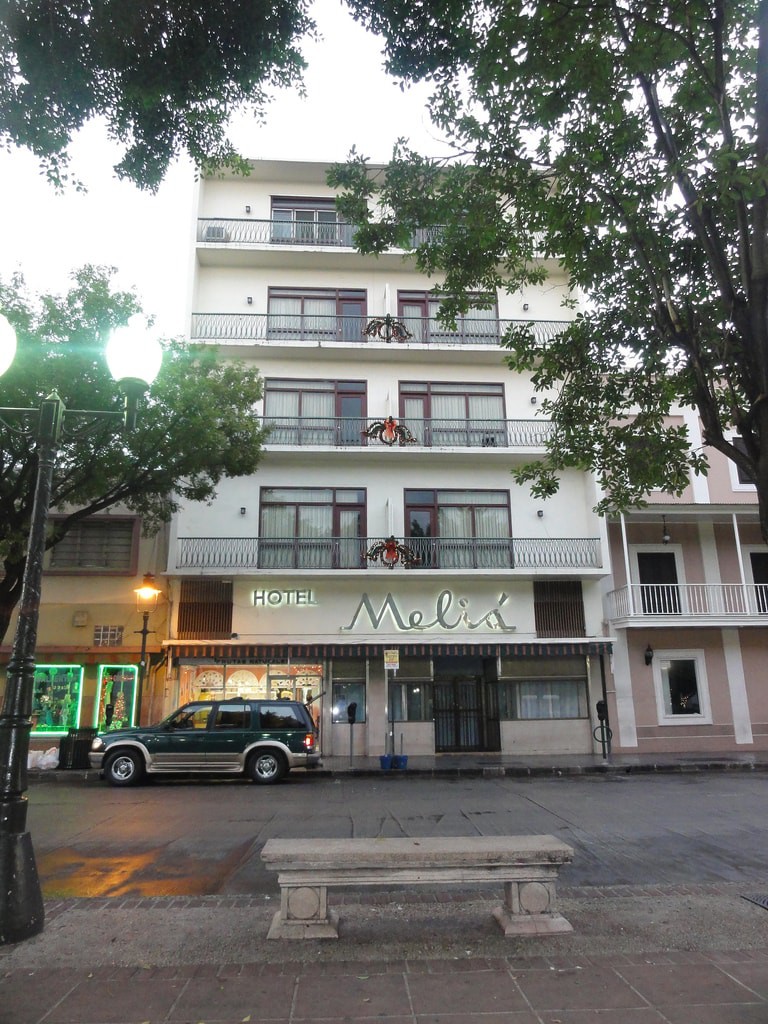 Parque de Bombas is one of the most recognizable tourist attractions of Puerto Rico. Its vivid black and red paint scheme and bright chrome of the antique fire engines draw you to it and makes it one of the most photographed attractions on the island. The firehouse as a backdrop is another popular place for wedding photos.

Parque de Bombas was built by Lt. Col Maximo Meana of the Spanish Army as the main exhibit pavilion for the 1882 Exhibit Trade Fair. In 1885 it was dedicated as Ponce’s official firehouse, and it was listed on the National Register of Historic Places on July 12, 1984.

The firehouse is open to the public and a tour only takes about 10-15 minutes, depending on your pace and interest. It can be self-guided or you can have a volunteer expert onsite take you through and provide greater detail. Admission is free, but donations are welcome and needed for the continued maintenance of this beautiful structure. 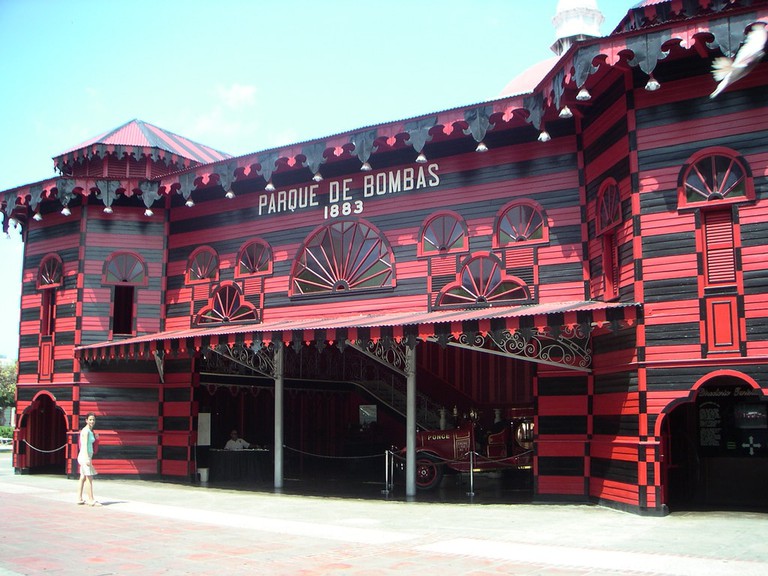 Typical of Latin culture, Ponce is built around the plaza, and the center point of the plaza is the church. Catedral de Neustra Señora de Guadalupe, more commonly referred to as Ponce Cathedral, is an awe-inspiring structure that is almost 350 years old. Step inside to admire the paintings, statues, and the pipe-organ at the altar.

The original parish built in 1670 was much smaller, but in 1835 that structure was demolished and construction on a larger building began and was opened for worship in 1839. The cathedral has undergone changes as a result of fires and earthquakes, but still maintains its dramatic beauty. The Cathedral of our Lady of Guadalupe was placed on the National Register of Historic Places in 1984. 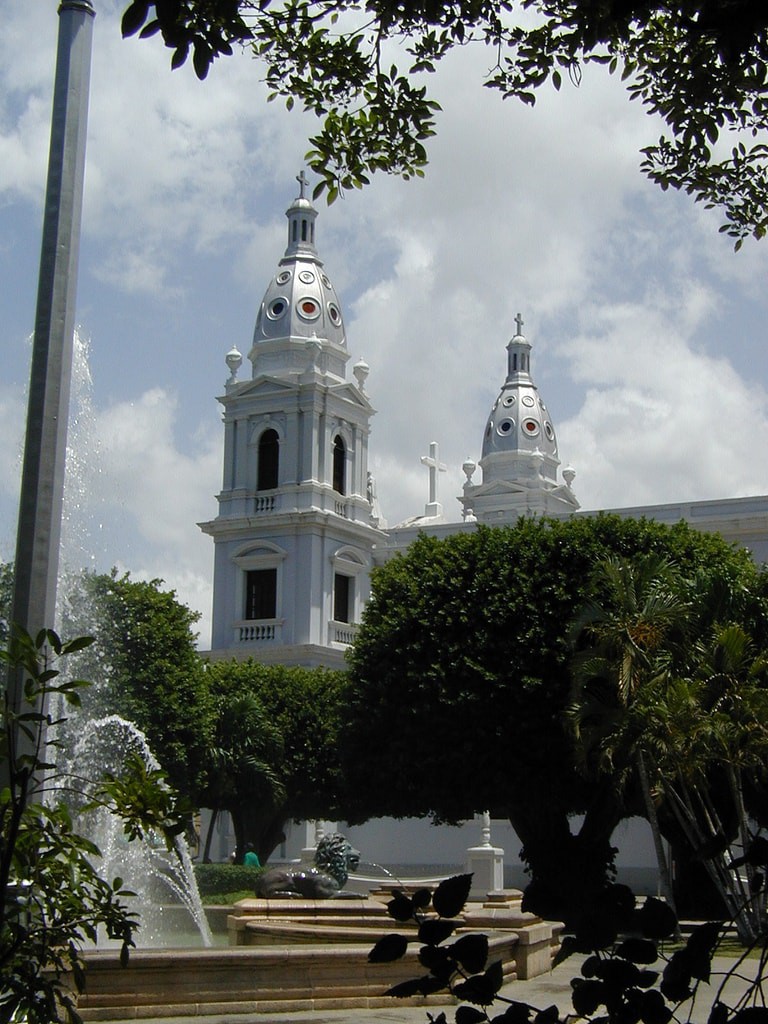 There are two smaller fountains in the north plaza of Munoz Rivera, but the stunning one, Fuente de los Leones, or Fountain of the Lions, is in the adjacent south plaza of Degetau. The fountain was originally featured for the 1939 New York World’s Fair, and then later installed in Las Delicias. The octagonal fountain is guarded by four lions. It is beautiful to see at any time of day, but particularly at night when colored lights enhance its beauty. 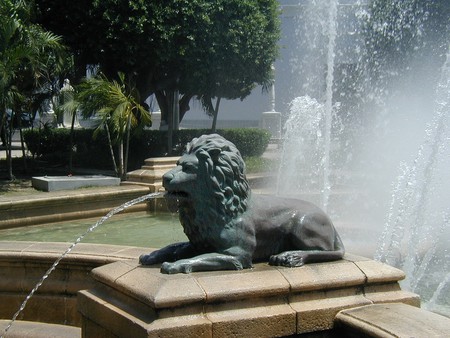 The Lions of Ponce

Fifteen blank, white, life-sized fiberglass lions were given to local artists who then added their interpretation of Ponce and Puerto Rico through their painting. Another objective was to capture the brilliance of the street art of Puerto Rico. In March of 2012, the lions were unveiled and shared with the public in La Parada de los Leones, The Parade of Lions. Fourteen of the lions were on display in Las Delicias, with one being reserved for display at the mall, Plaza del Caribe, to commemorate its 20th anniversary. Later the lions were displayed at various sites throughout the city. Not all of the lions are still on display, but there are still some throughout Plazas Muñoz Rivera and Degetau, and a number of them at Parque de Bombas. 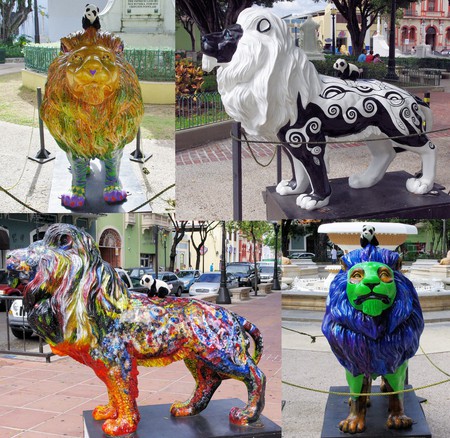 All that sightseeing can make you hungry, so take a break at Jumbo’s Pinchos, the best place in Puerto Rico for pinchos. On busy days like the weekends, you can choose between cerdo (pork) or pollo (chicken), during the week they will usually have one or the other. Jumbo’s Pinchos are so tasty and tender, you can get them with or without sauce, and it comes with a wonderful piece of fresh bread at the end of your pincho (skewer) that you can either use to take the juicy pieces of meat off to eat them (and try to keep fingers and face clean), or just eat that bread up and then devour the rest. That’s what napkins are for! Grab a cold Coke or some fresh juice to wash it down, find a bench in the shade and watch the world go by.

There are a number of gifts shops around the plaza, the two biggest being Mi Coqui Souvenir and Gift Shop, and Utopia. Mi Coqui is a great place for small, inexpensive trinkets, musical instruments for kids, t-shirts, and your usual souvenirs of shot glasses, coffee cups, stuffed animals and the like. Utopia has those items too, but also has more upscale items like sculptures and jewelry, and just a little higher quality items, as well as having a much wider selection of souvenir clothing. Utopia also has a wonderful café where you can grab a bite to eat before, during, or after you shop.

Just off the square within walking distance are a number of museums. Relish in the beauty of the history, art, and music of Puerto Rico at the Ponce Art Museum, Ponce History Museum, and the Museum of Puerto Rican Music.

What better way to wind down after a long day of adventure than relaxing at one of these incredible restaurants: La Bodeguita, D’Kanter, Campioni, Cuerdas Tabernas and Tapas, and King’s Cream.

For a bit of the nightlife and to keep the party rolling, have an after-dinner drink at Lola Eclectic Cuisine and check out the casino at Ponce Plaza Hotel and Casino. 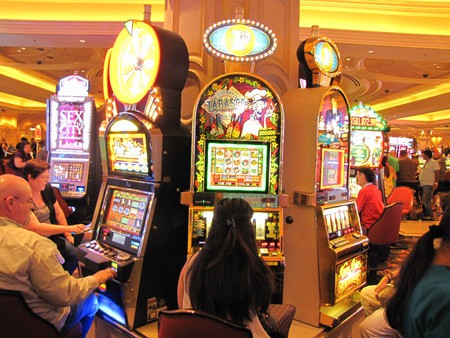