Top 10 Martinican Dishes You Just Have to Try

Martinican cuisine is a mélange of African, French, Caribbean and South Asian traditions. The recipes often reflect the complex history and varied cultural heritage of the island. Traditional dishes combine these global influences and use a range of local fruit, vegetables, fish, meat as well as the famous piment antillais, which is hotter than any chili you have ever tried. We check out the 10 best dishes from Martinique that you just have to try.

Accra is a form of fritter and probably the most famous and most common dish in the Caribbean, with each island having their own unique recipe. They are most frequently made with salt fish, prawns or vegetables. They vary from island to island and in Martinique, accras de morue are a signature dish. They are made from a batter in which salt fish is the main ingredient, mixed with spices. Martinicans eat this dish as an appetizer, a snack or sometimes as a breakfast item.

This term is used to describe a type of delicious local sausage. In Martinique, the two most popular types include Boudin Creole and Boudin Blanc. The former is made from pork, pig’s blood, onion and other ingredients, whereas the latter is a white sausage made from pork without the blood and sometimes featuring prawns, crabs, sea snail (or the sea conch) or fish. They can be eaten hot or cold and are a traditional food at Christmas. 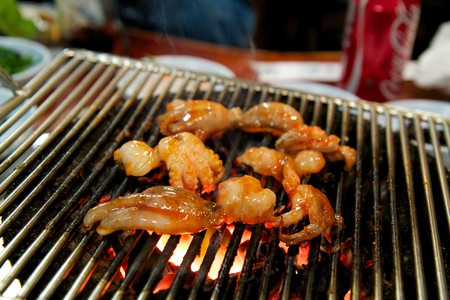 Chatrou is a small octopus frequently used in a number of Martinican dishes. The most famous of these dishes include the Fricassée de chatrou, which is an octopus stew with tomatoes, onions, lemons and other spices. It can also be eaten as a Ragoû de Chatrou, which combines fried octopus with red beans, lentils, white rice and chopped yams. Martinicans frequently get it in a form of a take-away from some of the local, authentic take-out joints.

Colombo is a signature spice of the Island and is widely available from local supermarkets and shops. Colombo is a blend of French, West- and East Indian spices. It combines turmeric, brown mustard seed, hot pepper, coriander, West Indian bay leaf, thyme and black peppercorn. The most famous dishes include Colombo de Martinique which is a curry traditionally made from lamb cooked in coconut milk, ginger and Colombo powder. It is also used to season chicken, goat, pork or vegetables such as aubergine, pumpkin or other local root vegetables.

Ti Punch is a traditional Martinican drink that is an inherent part of the cultural and historical landscape. The main ingredient in a Ti Punch is rhum agricole, which is a term of cane juice rum typically distilled in the West Indies. It is made from freshly squeezed cane juice rather than molasses. In a Ti-Punch the rum is mixed with a drop sugar cane syrup and a squeeze of a lime. Often instead of serving the drink, the barman will place the ingredients on the bar where each customer can prepare their own drink according to taste.

Lambis is the Creole word for a large sea snail. It may not be something that you are used to eating, but in Martinique just like chatrou, it is a staple. It can be grilled, fried, eaten in a casserole, stew or a pancake. It is frequently served with tomatoes, limejuice, spicy chilli sauce, parsley and salt.

This dish is traditionally eaten during Easter and marks the end of the Lent period. The main ingredient is the land or mangrove crab. During the run up to this religious festival many Martinicans will buy or catch their crabs and keep them for a few weeks feeding them a variety of spices and vegetables. The crabs are normally prepared and stuffed with rice, onions, tomatoes, chives, spices and served with spicy sauce.

Literal translation would mean ‘fierce avocado’ and refers to a hot, salt fish appetizer. The idea of fierceness comes from the spice levels used in the dish. The traditional recipe is made from avocado, limejuice, cassava flour (known as ‘manioc’), chillies mixed with spinach leaves and salt fish. There are other variations which include crab or lobster meat. The dish was traditionally eaten for breakfast by workers who worked on sugar plantations. 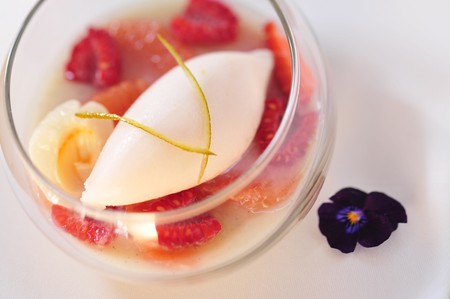 Made from coconut milk, vanilla powder and sugar, this dish is a traditional Martinican dessert. The ingredients are mixed with gelatin and sometimes cinnamon or lime juice and zest to develop a sweet-tangy taste. The ingredients are mixed to a creamy paste and then separated into small bowls and refrigerated, ideally over night. Blanc Manger au coco is eaten cold and ideally served with some red fruits and sometimes with almonds. 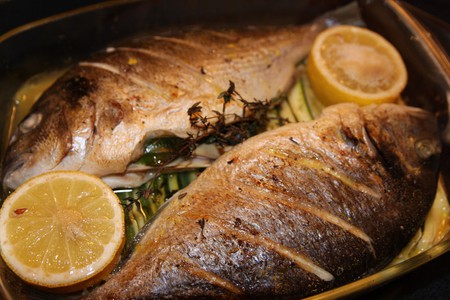 Dorade, known also as a sea bream, is very common in Martinique. It is grilled and served with potatoes, chips, salad or rice. It is first marinated in lime juice, thyme, salt and pepper and then grilled – sometimes even oven baked.