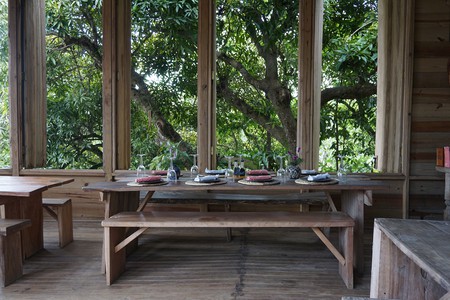 Free Hill in St Ann Parish, Jamaica, is seeing a steady stream of local and foreign foodies coming to taste the wondrous plant-forward food at Stush in the Bush.

Jamaica may be known for jerk chicken, but the island has an ample presence of vegan dishes as well, thanks to the Rastafarian community, which practices a diet known as Ital. Rastafarians believe in nonviolence, which extends to the way they eat; Ital food comes directly from the earth and is free of any animal products. Lisa and Chris Binns of Stush in the Bush have incorporated traditional Ital staples, such as breadfruit, coconut and plantain, into their meals at their mountaintop eatery. “Rastafari Ital is a way of life that’s conscious of the equitable exchange between humans and nature. It’s rooted in the idea that we are one with nature, are its protectors and have an abundance of everything to survive and live,” says Chris. 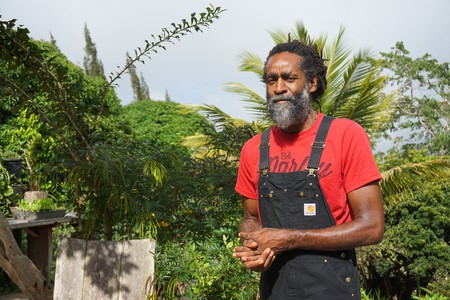 As a Rastafarian, Chris Binns believes a vegan Ital diet is good for the planet and the body | | © Lola Méndez

Chris stopped eating meat 25 years ago and, in recent years, adopted a vegan diet after embracing Rastafarianism. The duo met when Lisa, a Bajan who grew up in the US, was vacationing in Jamrock a decade ago. Chris is a bushman and farmer from the countryside, which is colloquially called the Bush. Lisa is a little bit fancy and represents Stush, a Jamaican patois term for a posh woman. She joined him on the land where he grew up to reconnect with nature. As they tended to the land to grow their own produce, they realized they wanted to show their community how tasty plant-based cuisine could be. So, they opened up a restaurant serving food directly out of their kitchen.

Stush in the Bush is sustainable tourism at its best. The restaurant is as off-grid and eco-friendly as possible with unpainted aluminum siding, rainwater collection for the community (it doesn’t have piped water) and electricity sourced from nine solar panels. “We have a great appreciation for the ebb and flow of nature, rain for water, sunlight for power,” says Chris. 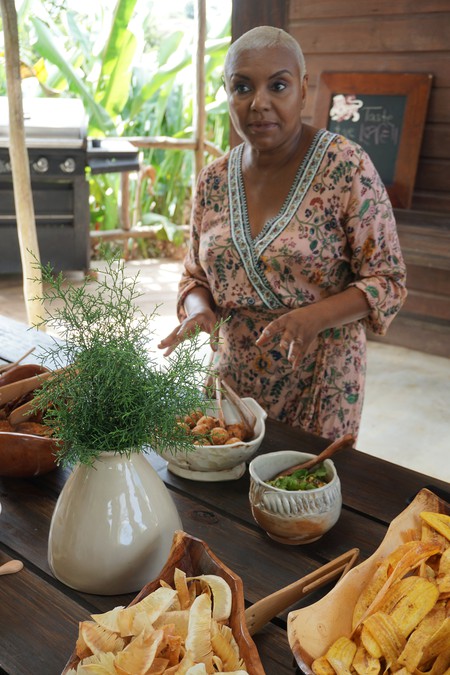 The afternoon I visit their oasis is a balmy summer one. The rustic open-air dining room that Chris built feels immediately like home. Indeed, the Binns live on the 15-acre (six-hectare) organic Zionites Farm and interject their intoxicating love for the planet, produce and each other into every nook and cranny. Even wilted hibiscus flowers from the national blue mahoe tree that have naturally fallen seem vibrant as Chris gently rolls the petals through his fingers and says the tree’s leaves look like hearts.

He has sage wisdom to share about the surrounding nature. Chris displays Jamaican black castor beans, which grow wild on the farm, and reminisces that as a child he was given them as a laxative when he had an upset stomach. 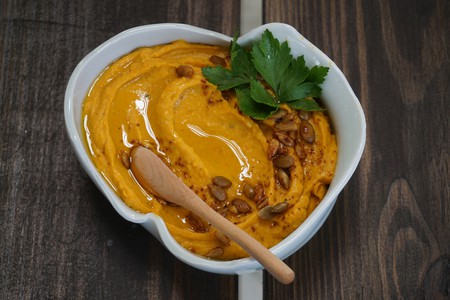 Food in Jamaica has been used for healing for centuries, and the couple wants to return to those roots | | © Lola Méndez

“Growing up in Jamaica, the Bush was our pharmacy,” says Chris. “With the knowledge passed down through generations, you knew instinctively what to do when a particular health issue arose. The feva grass, lemongrass, is good for fever, colds, congestion and bronchial issues. It can be used in teas, cooked in food and made into tinctures and essential oils for different applications.”

Abandoning my sandals (along with some of my stush thoughts), I join Chris for a barefoot walk through his food forest. Chris has been walking his ancestral land barefoot since he was a child. He believes his family has resided here for at least eight generations and feels as rooted to the land as the trees in the area. Such a connection to the planet is an integral part of his restaurant. 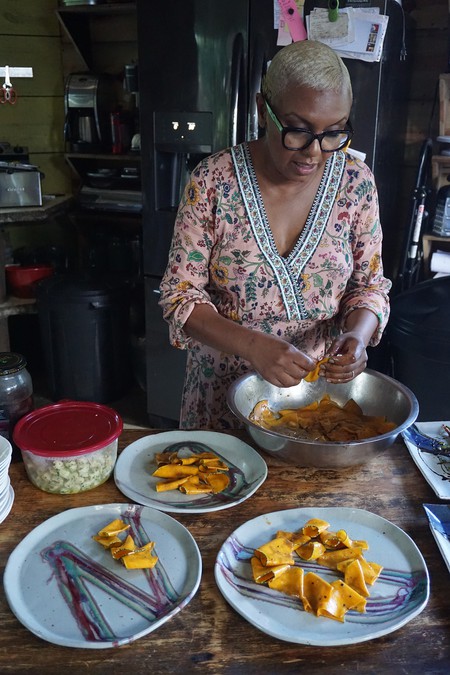 Stush in the Bush is as sustainable as possible, with solar panels and systems to collect rainwater | | © Lola Méndez

Stush in the Bush is dedicated to seasonal and locavore eating. Most ingredients come from the farm, except for oyster mushrooms from Jamaica Mushroom Growers. Chris cultivates an assortment of fruit trees, including banana, mango, passion fruit and mulberry. Baby arugula, carrots, kale, cilantro, basil, parsley and edible flowers grow in the nutrient-rich soil. Meanwhile, a curtain of drying cannabis sways in the gentle wind.

Stush in the Bush is an authentic farm-to-table experience. As we walk, Chris picks garnishes for Lisa’s farm-fresh dishes. “Plant-based living is regenerative, sustainable, sexy and healthy,” he says. “Most of all, it’s important our food be made with love. Great, healthy ingredients, produced in clean, healthy environments, will certainly produce high-vibration foods.” 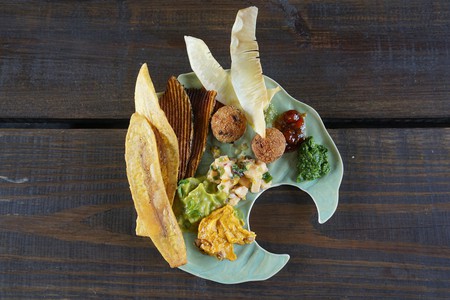 Next up is a fire-grilled pizza with homemade vegan cheese. Fluffy pizza dough is dressed with tomato sauce made from scratch, basil pesto and garden-fresh vegetables. Later, we’re served delectable cake and beignets.

Lisa uses simple ingredients to create innovative dishes that are anything but basic. She proves that eating plants can be exciting and flavorful. She comes up with the seasonal dishes based on what’s growing on the farm and consulting with her five cooks.

“Nature is beautiful in everything she does – without effort,” says Chris. With so much bounty directly from the earth, the secret to Stush in Bush’s success is simple: fresh is best.