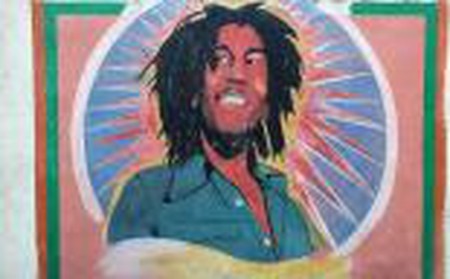 Jamaican art has always been closely related to the country’s troubled politics; Reggae musicians like Bob Marley and Peter Tosh infused their music with social and political messages, creating a multi-layered and accessible art form. Street art in Jamaica strikes a similar note. The “yard art” murals that fill the streets of Kingston illustrate social struggle. We take a closer look at the politics and aesthetics behind Jamaica’s street art. 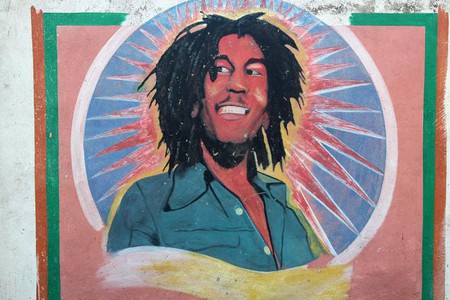 Ever since colonial times, Jamaica’s art scene has been constantly evolving. Inspired by classical European art at first, it was only in the 1920s that Jamaicans really developed their national style and intuitive artists like Kapo started showcasing their work. From the 1940s onward, visual arts became more political and the strong desire to become independent became the main source of inspiration for Jamaican artists. Today, Jamaican artists are famous for producing emotional but also thought-provoking works that can be found all around the island and in museums around the world. These local styles also include colorful yard art murals, which most often appear in times of political chaos.

Painting a Mural in Kingston 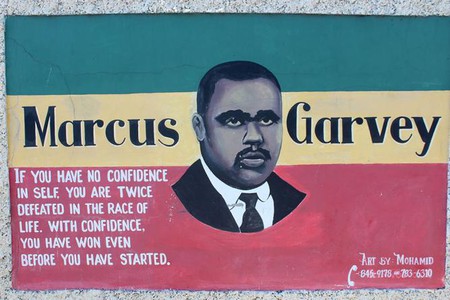 An inner-city community of Jamaica’s capital, Trench Town is one example of a place full of inscriptions that challenge or shape dominant local images and stereotypes. It is similar to other neighboring communities with high poverty, violence, and unemployment rates, but at the same time different and unique because it’s the iconic home of Bob Marley, and the birthplace of reggae. Nowadays, the landscape there is a constant reminder of the area’s rich cultural history as residents prefer to identify themselves in a positive light by referring to reggae music and the legacy of those who made the community popular. Numerous murals portray their local reggae music superstars like Bob Marley, Peter Tosh and Bunny Wailer together with well-known black leaders such as Marcus Garvey. The murals are placed in strategic locations at the entrance to Trench Town and along the main roads. As the majority of these communities do not have officially defined boundaries and street signs, but instead are considered to be part of the ghetto or downtown Kingston, yard art murals are essential to the development of the residents’ sense of identity.

Jamaican landscapes are always engraved with meanings to be read and interpreted as expressions of local cultural values and beliefs, identities and traditions specific to a time-frame, social group and location. A well-known mural in Trench Town depicts the map of Africa behind the marijuana-smoking Bob Marley’s head. The mural represents his 1977 album, Exodus, which was, more than anything else, a response to a politically motivated assassination attempt in December 1976. Exodus was recorded during his time spent in a self-imposed exile in London and became regarded by many, including the TIME magazine in 1998 as the ‘best music album of the 20th century’.

The Commodification of Art

As consumption sites, yard art murals also play a role in the drive to economic growth. To gain the status of a tourist destination, selected images targeting particular groups need to be brought forward to attract visitors. Tourists and the media influence the commodification and representation of the inner-city communities, but local non-state actors do it too. In Trench Town, numerous strategically placed murals advance a positive image about the community, demonstrating that it is not neglected, overcrowded or violent.

Despite being the most iconic figure in Trench Town, Bob Marley is not the only one to be represented on murals. Many murals also depict scenes from Rastafari culture. The Emperor Haile Selassie of Ethiopia can be seen; marijuana used for spiritual purposes and the African ‘mother land’ are also dominant themes. Red, gold and green are the most commonly used colors as they are those of the flag of Ethiopia. Bob Marley too was a Rastafari and downtown Kingston was home to many of the first Rastafaris. As such, the murals represent the importance of Rastafari culture and the way in which it has shaped reggae music and national identity. In the 1970s, both Rastafari culture and reggae attained the peak of their popularity. In times of difficult political and socio-economic conditions in the ghettos of West Kingston, this resistant culture found a creative outlet to express its concerns in the form of reggae music, and has since been inseparable from the genre. 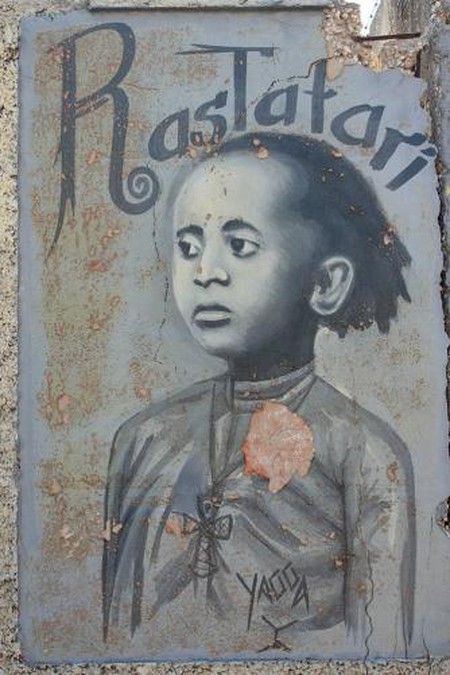 To a lesser degree, some murals pay homage to the local leaders or ‘dons’. These murals are also placed at strategic locations, most often deep inside the communities where they can be hidden from the public eye. Here, it becomes apparent that Trench Town is not really different from the neighboring communities and is still a run-down and violent inner-city community, similar to the Trench Town Bob Marley spoke about. A wider urban perspective is needed to understand Trench Town’s art. Poverty, crime and exclusion are all elements that add to the residents’ experience and influence their discourse which then is put on display on their murals.

Like many places around the world, Jamaican inner-city communities have two faces; the public and the private one. The private one is strategically located outside of the reach of visitors. However, the more adventurous could, at times, have access to these areas but only under specific conditions. The public face is conveniently located in the outer sections of the same community. In Trench Town, for example, the outer sections, especially where the Reading Centre and the Culture Yard Museum are situated, is easily accessible to all. But entering the inner sections is most often prohibited to non-residents. Exceptions are made for guided tours given by the community’s residents.