The 10 Most Beautiful Places In Jamaica

When Christopher Columbus first landed on the shores of Jamaica he wrote in his records, “It is the fairest island that eyes have beheld.” The description still holds true as the island welcomes more than 2.5 million tourists each year hoping to experience a piece of paradise. With forests, mountains, valleys, rocky cliffs and beach coastline, it’s hard to imagine all the places on this list can be found on one tiny island. 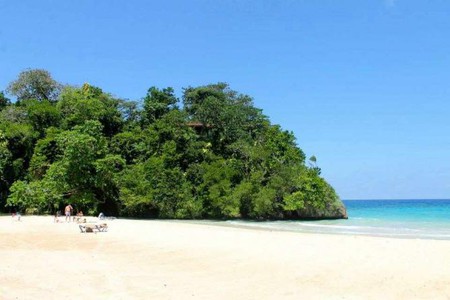 Nestled between the rocky, forested cliffs in Port Antonio, Jamaica, Frenchman’s Cove is the ultimate tropical oasis. The cove’s beach has some of the most pristine white sand, where some of the bluest water breaks in salty, gentle waves. A small tributary of the region’s biggest river finishes on one side of the cove, mixing fresh and salt water into a refreshing, luxurious natural pool. If one day isn’t enough in the beautiful place, the property has a hotel with wonderful cliff-side villas available for rent. 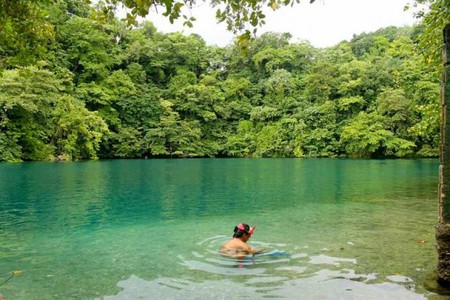 Just a few miles up the road from Frenchman’s Cove, is one of Jamaica’s most beautiful and untouched natural wonders. The Blue Lagoon, once thought to be bottomless, is an underwater sinkhole that is about 180 feet deep. The dramatic color of the water changes throughout the day depending on the position of the sun in the sky. The surrounding lush vegetation and untouched environment are what make this place truly special. The lagoon’s water is unusually warm for the area. Boat tours are available to visitors, though we recommend spending as much time in the gorgeous water as possible.

Blue Mountain peak is the highest mountain in Jamaica, standing at 2,256 metres. The UNESCO World Heritage Site has some of the most beautiful mountain views in the Caribbean. Though densely vegetated with Jamaica’s green, lush flora, the mountains appear to be blue when dense flog shades the sun’s rays. Dominating the eastern part of the island, several trails in the mountain range can be hiked and biked with or without guides. Hiking to the peak is breathtaking if you make it to the top right before sunrise. On the usually clear mornings, the southern coast of Cuba, which is just 90 miles north, is visible from the peak. 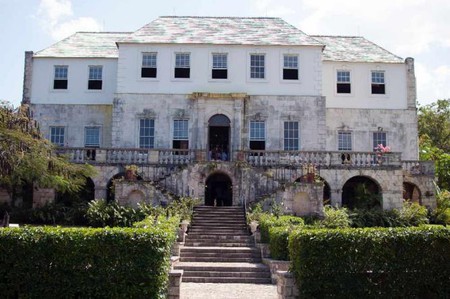 Just outside of Montego Bay, Jamaica’s second largest city, is one of the island’s most historic plantation homes. Rose Hall is a Jamaican Georgian mansion with a stone base and plastered upper story built in the 1770s. The house sits high on the hillside, looking down onto the northern coastline. Legend says that the house is haunted by the ghost of Annie Palmer, known as the “White Witch of Rose Hall.” She is said to have murdered her three husbands, while living in the house. Though the legend has been disproven, the house offers tours both in the day and night, that recount what life might have been like for the slaves and plantation owners at the height of the slave trade in Jamaica. 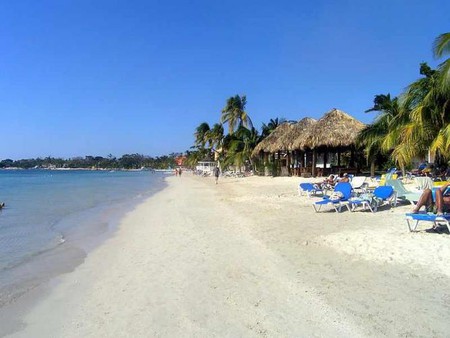 Located in one of Jamaica’s most visited beach towns, Negril, Seven Mile Beach is a stretch of pure paradise. Though the beach is actually only four miles long, the white sand and crystal blue water that laps the shore seems to go on much further. A number of hotels and restaurants dot the coastline. Negril is on the western side of Jamaica, offering some of the most stunning beach sunsets in existence. There is nothing quite like seeing the sky change from a pale blue to shades of yellow, orange and pink against the darkening ocean. 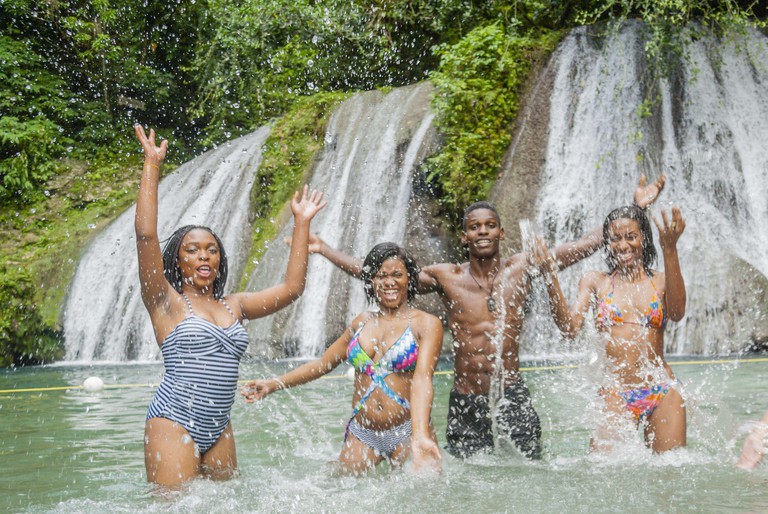 Once a haven for runaway slaves seeking refuge from the plantations in St. Thomas, Reach Falls is one of Jamaica’s most beautiful waterfalls. Nestled in the Montane Forrest in the John Crow Mountain Range it offers spectacular views, of why Jamaica is known as the “land of wood and water.” Densely vegetated with over 23 species of fern and various species of birds, it is an oasis of peace and tranquility, far from the hoards of tourists that flock to other waterfalls like Dunn’s River Falls in Ocho Rios. If you’ve seen the movie Cocktail, starring Tom Cruise, it might even look familiar. Part of the movie was filmed there.
Open In Google Maps
Manchioneal, Portland Parish, Jamaica
+18762768663
Visit Website
Give us feedback

Tucked within the lush hills of Ocho Rios, Blue Hole has earned its nickname of “Secret Falls.” It is a tropical escape, easily accessed by car or hired bus service. It isn’t an official Tourism Board site, making the attraction relatively untouched. The site is formed from a tributary of the parish’s largest river, Rio Nuevo, that cascades into several small natural pools, finally ending in one much larger and deeper. Visitors enjoy swinging into the water from ropes that hang on the sturdy trees surrounding the pool. You won’t want to miss this hidden gem on your trip to Jamaica. 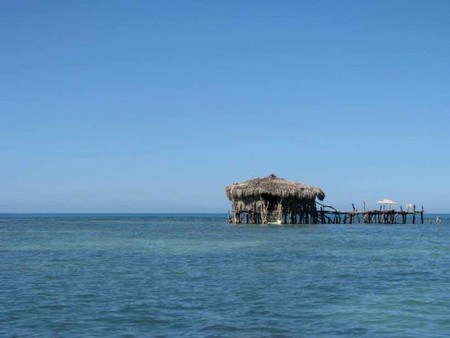 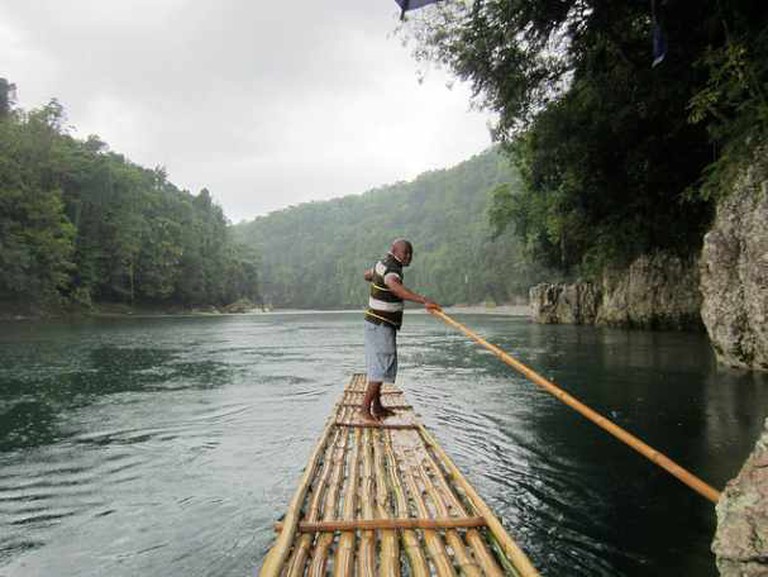 Rafting on Rio Grande | ©Flickr
Floating on wooden stilts in the crystal blue waters in the parish of St. Elizabeth is the Pelican Bar. The small wooden shack’s resilience through hurricanes and the rough seas of the south coast remains a mystery to most. It is a landmark in Jamaica, having been around for more than 20 years. Easily accessed by boat, canoe or kayak, or for the physically fit, a lengthy swim, it is truly one of a kind. Sit out on the deck and enjoy the view of the mainland with panoramic views of the cerulean blue Caribbean Sea.
Open In Google Maps
Jamaica
+18763544218
Visit Website
Give us feedback

The Rio Grande is one of the biggest rivers in Jamaica and the largest in the Portland parish. Named by the Spanish, who were the first to colonize Jamaica in the 15th and 16th centuries, it has become a popular destination for rafting. The gentle river is the perfect flowing force for the bamboo rafts that transport visitors up and down the river. Sip water from a fresh cold coconut while you drift lightly by the vegetated riverbanks as bending bamboo and grasses dangle over the water as if yearning for a cool drink. Rafting tours can be arranged through local hotels or travel agencies. Visiting Portland and the Rio Grande is sure to give you insight into why many foreigners like Errol Flynn and Ian Fleming chose to call this area home.

Perhaps one of Jamaica’s most popular tourist attractions, Dunn’s River Falls is one of the island’s most unique waterfalls. The water cascades in step-like stages, allowing visitors to climb the 600 feet to the top, fairly easily. It is believed to be one of the most historic battle sites, where the Spanish and the English fought for possession of the island in 1657. The waterfall flows directly into the sea, allowing visitors to experience the river as well as the small beach alongside it. Look familiar? Many scenes from the James Bond movie Dr. No were also filmed at the falls.