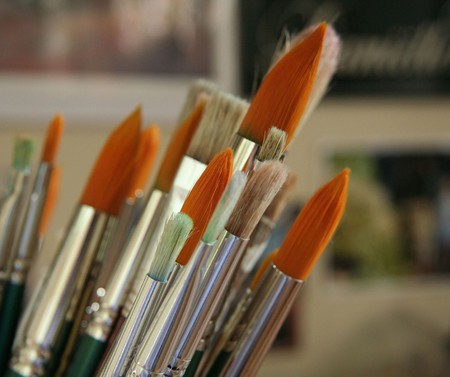 Fierce, fabulous, and one of the most controversial African American artists of our time, Renee Cox uses photography to question our views on the state of politics, race relations, the female body, the role of women and feminism today. To do so, the artist turns stereotypical representations on their head. Phillip Spradley explores her work, which can inspire a range of emotions, from enlightenment to anger.

Cox was born in Colgate, Jamaica in 1960. Her family moved to Queens, New York when she was still a baby before settling in Scarsdale where she spent her adolescence. Cox completed her undergraduate studies at Syracuse University, where she was a film major. After graduating, she devoted her time to photography and concentrated on shooting fashion in Paris. In early 1992, Cox completed her Masters of Fine Arts from the School of Visual Arts in New York City, where she also studied Photography.

Cox has used her work to make social critiques on a range of subjects from institutionalized religion to motherhood. In 1994, she exhibited a self-portrait entitled Yo Mama, in which she depicted herself nude, wearing nothing but high heels and wielding her two-year-old son as a weapon. Cox started receiving major attention after her first one-woman show at the Cristinerose Gallery, New York in 1998. The highlight of the exhibition was a large format color photograph entitled The Liberation of UB and Lady J., in which Cox appears as a superhero named Raje rescuing a newly empowered Uncle Ben from his box of rice and Aunt Jemima from her maple syrup label. The photograph gained so much notoriety that it made the cover of Le Monde, a well-known French newspaper.

Renée Cox is often described as provocative or controversial, even on her own website. Her photographs work hard both to insert black bodies into white-dominated imageries and to liberate them from oppressive stereotypes. In “Yo Mama,” Cox recasts iconic Christian artworks—Michelangelo’s Pietà, Leonardo’s Last Supper—with herself and other African American models, often in the nude. The project was rebuked by Rudy Giuliani when it was exhibited at the Brooklyn Museum in 2001, which is probably the root of the “controversy” surrounding her work, but in hindsight says much more about the righteous racism of Giuliani and the neocon movement he championed. For in fact, to be outraged by these works is to object to the presence of naked blackness but to have no problem with the long art history of white female nudity. It is to say that African Americans have no right to Christianity, a religion millions were forced to adopt but that they transformed into something beautiful, a mechanism of survival and cultural celebration. This is the crux of Cox’s project. To say it’s designed to provoke controversy is to assume an audience of outraged white supremacists (which, given the art world establishment, isn't as far from the truth as one we'd care to admit). ' Renée Cox, Yo Mama’s Pieta, 1996 #reneecox

In 2001, the Brooklyn Museum showcased Cox’s photography series entitled Committed, in which the artist appropriated European religious masterpieces and revamped them with black figures. The most talked-about piece was Yo Mama’s Last Supper, a remake of Leonardo Da Vinci‘s Last Supper with Cox portrayed as a nude Jesus. In the painting, Cox is surrounded by black disciples, except for Judas who is white as he is traditionally portrayed. Cox commented on the painting, saying: ‘Christianity is big in the African American community, but there are no representations of us […] I took it upon myself to include people of color in these classic scenarios’. Even after this statement, the artwork made a stir in the Roman Catholic community. One of the most noted opponents was the then New York City Mayor Rudolph Guiliani, who insisted on setting ‘decency standards’ in City museums in order to keep similar works from being shown in any museum that receives public funds. The mayor’s suggestion was not enacted, as it was unconstitutional under the First Amendment.

In 2006, Cox exhibited at the Jamaican Biennial with a series entitled Queen Nanny of the Maroons. Queen Nanny is the only female national hero in Jamaica: she was a military leader of the Jamaican Maroons in the 18th Century. In this piece, Cox displays a series of photographs of herself in various situations, such as being baptised, as a schoolteacher among children, a warrior wheeling a machete, and going to church in her Sunday best. Other photographs in the series show people from the community where Cox took the photographs; Cox captures these people in their everyday environment, the environment that Queen Nanny was fighting for. Examples of these people include: the ‘Banana Man’ with his pick of the day, the ‘Bamboo Man’ in front of one of his structures, the ‘Goat Man’ sitting with his goat and the ‘Old Man’ sitting on the porch. These characters are also accompanied with pictures of local children and women nudes. This body of work was awarded the Aaron Matalon Award, a prestigious honor given to the best entry at the biennial.

Artist Renee Cox is being featured in the Caribbean: Crossroads of the World exhibit at the Perez Art Museum Miami. April 18-August 17, 2014. More details at www.rountreeart.com

Through her powerful figures, colourful scenery, large prints and the visual impact of her photographs, Cox’s body of work is fascinating and politically engaging. She excellently represents her ancestors and expresses her views on society, while strongly challenging the pre-ordained roles of African Americans and Women. Cox continues to work on her photographs and exhibit.