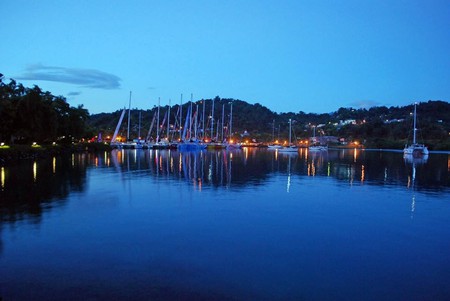 The boatyard at the Errol Flynn Marina/ Courtesy of http://errolflynnmarina.com/

The marina honoured one of Port Antonio’s most famous residents, 1950’s Hollywood Movie Star, Errol Flynn (widely known for playing Robin Hood in 1938’s The Adventures of Robin Hood). Flynn had a passion for water, fishing, and the good life, and he travelled frequently to places like Port Antonio. The Port Authority of Jamaica built The Errol Flynn Marina in 2002 in honour of Flynn’s valuable contribution to the town.

According to local lore, Flynn’s yacht, Zaca, was washed ashore by a storm while he was travelling in 1942. It was then that he discovered Port Antonio. He described Port Antonio as ‘the most beautiful woman I have ever laid eyes upon’.

A post shared by Denise Mason/Pickcha Dis (@denisemasonphotography) on Apr 19, 2014 at 3:26pm PDT

In the early 1950s, Flynn decided to retire from Hollywood and relocated permanently to Port Antonio with his third wife, Patrice Wymore-Flynn, an American actress and singer. Over the years, the impact of their celebrity helped put the Eastern Parish in Jamaica on the international map.

Located just to the west of the Titchfield Peninsula, The Errol Flynn Marina is located in the centre of Port Antonio.

Errol Flynn popularized trips down rivers on bamboo rafts and contributed to the Hollywood/tourism appeal of the parish. He also helped Port Antonio gain its reputation as the safest parish in Jamaica.

Errol Flynn Marina has the distinction of being the only Caribbean marina capable of handling the largest yachts in the world.

The Marina is home to Lady G’Diver Scuba Diving School, Norma’s at the Marina,, Devon House I-Scream, a gift shop called Things Jamaican, a children’s play area, a swimming pool, and a beach.

Because of its beautiful sunset and scenery, locals and tourists have made it a popular spot for weddings and other occasions.

The Errol Flynn Marina and boat yard is a world class yatching marina, located in the center of Port Antonio, just to the west of the Titchfield Peninsula. #PortlandParadise #jamaica #experiencerealja #beautiful #experienceJA #travel #travelplace #realportland

It also features a helicopter landing area that can accommodate up to four helicopters.

There is no admission charge to visit the Marina. Guests can visit and enjoy the beautiful scenery free of charge.

On the grounds of the Marina is a hotel complex with a pool, bar area, and restaurant.

Every year, there are major sports tournaments held at the Errol Flynn Marina for fishing and boating lovers.

The posh yachting dock, where sailboats are moored and visitors retreat, offers 32 berths and 100-tonne marine Travelift (for yachts up to 95 feet).

Errol and Patrice Flynn were involved in tourism. They once owned the Titchfield Hotel, ran a wicker business, produced a guava jam, and reared cattle. Errol died on October 14, 1959, at 50 years old and Patrice died in 2014 at the age of 87.

The grounds of the Marina is also one of the most popular spots in Port Antonio for large beach parties.