A Seafood Lover's Guide to Jamaica 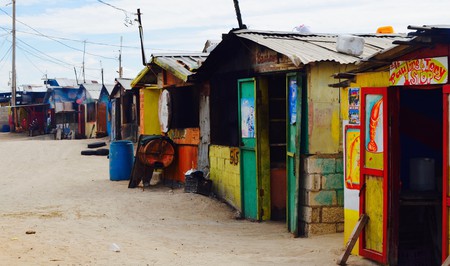 Jamaica’s coastline is dotted with little fishing villages where long wooden boats can be seen tied up beneath trees on beaches. Jamaicans love seafood and have developed an interesting variety of dishes worth exploring. Seafood is available everywhere from the street vendor to the top restaurants. With seafood a staple of every menu on the island, it can be hard to know where to start, hence our seafood lover’s guide to Jamaica.

There are a few seafood restaurants that rightfully stand out as exceptional in Jamaica. Gloria’s at Port Royal is arguably the most famous of them. Situated just 30 minutes from Kingston, Gloria’s has fantastic sea views and a wonderful atmosphere — and the best curried fish ever. The jerk shrimp is pretty good too. Staying in the capital, Whitebones offers top quality seafood, so fresh it is possible to pick your dinner live from the tank on arrival. Venturing along the south coast to Manchester, Little Ochi restaurant provides beachfront seafood dining with a view. Jerk lobster is an interesting variation (it’s not only chicken that gets jerked in Jamaica) and the steamed fish is delicious — all freshly caught. Of course, many of the better hotels along the north coast will also offer very good seafood, but much of the enjoyment in Jamaica is the local atmosphere and so it’s well worth venturing out to one of the better local venues.

If a restaurant, even a casual one, seems too formal, then why not dine on the beach as close to the source of your dinner as possible? Hellshire on the south-east coast is one of the most famous venues — the beach is littered with wooden shack-style restaurants serving fresh seafood and cool beer with a buzzing atmosphere and local vibe. Nearby Fort Clarence Beach is quieter and more modest in scale but serves fantastic seafood. Go mid-morning and watch the fishermen come ashore and prepare their catch in the shade of a tree. For a real castaway experience, some of the quieter north-coast beaches such as San San and Winnifred are popular with local spear fishermen who can be seen swimming from the beach. Their catch is often sold to the beach restaurant (the red snapper is worth a try). Over to the west, the Pelican Bar just off Treasure Beach actually sits in the sea on stilts and must be reached by boat. Fresh fish is served on site at what is one of the most iconic Jamaican venues. If catching a boat to dinner is a chore, then try Fireman’s Lobster Pit at Negril — they offer some of the best lobster anywhere, served on the beach. 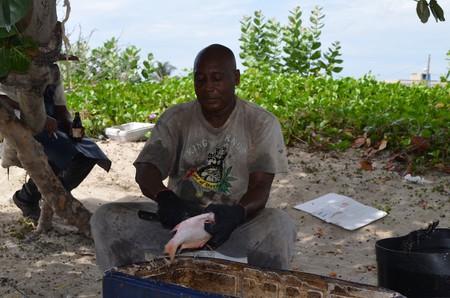 Leaving the beach behind, street vendors in most towns and cities sell a variety of seafood. Conch soup is the most common, often served from a large metal pot kept hot on a wheeled trolley. Vendors can be seen pushing the trolleys along busy streets where customers stop for a cup full of nutritious conch soup. The conch is a sort of sea snail said to have aphrodisiac properties. In fact, conch soup is available in most seafood restaurant and beach eateries in Jamaica. Staying on the street, the oyster bar in Port Royal has to be one of the few street vendors of oysters anywhere. A hand-painted sign hangs above a roadside table stacked high with fresh oysters on a quiet backstreet not too far from Gloria’s. Illuminated by a single lightbulb, backstreet oyster eating doesn’t get any more atmospheric than this. 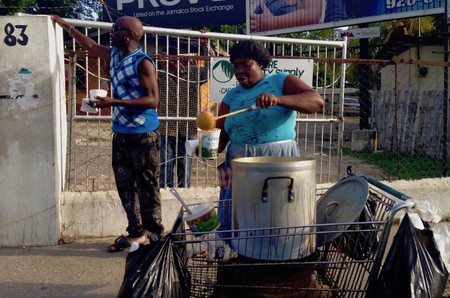 The freshness of Jamaican seafood isn’t in doubt, but some people might prefer the satisfaction of catching their own. The main tourist hub of Montego Bay has a number of operators offering deep-sea fishing excursions for mahi mahi, tuna, marlin and snappers. The best thing is knowing that on return to shore, you will be dining on your catch at the Montego Bay Yacht Club restaurant. Otherwise, it is possible to join the spear fishermen of the north coast for a more intimate fishing experience — just be sure to agree to it with them first as they can be protective about their fishing areas. 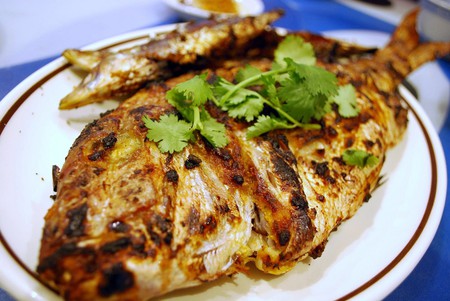 Grilled Snapper and Sardines | © Alpha/Flickr
Give us feedback