A Brief History of Ackee and Saltfish, Jamaica's Staple Breakfast 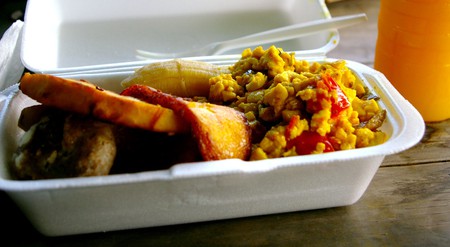 Ackee and saltfish, Jamaica’s staple breakfast, is a tasty and nutritious way to start the day. However, even though ackee is the national fruit of Jamaica, neither ingredient is indigenous to the island. As with so much of modern Jamaica, even the breakfast has its roots in 18th-century colonialism. The fruit is African, the fish is European, but the finished dish is definitely Jamaican.

The ackee fruit, which grows on a large tree, originates in West Africa and is thought to have been brought to the Caribbean during the mid-1700s. It is easy to grow and prepare, and is one of the many African legacies of the Jamaican people. Care must be taken in the preparation of ackee due to poisonous toxins present in parts of the fruit. The outer red fruit looks something like a red bell pepper before it is fully ripe. When ripe, the fruit opens and releases some of its toxins (it shouldn’t be picked or prepared before this time). Inside the fruit there are dark coloured seeds, again not to be eaten due to toxicity, and yellow flesh — the bit that is eaten. The yellow flesh is then boiled. The fruit is so ubiquitous in Jamaica that it can be purchased fresh, in bags from street vendors, or even canned in the supermarket. During ackee season, it is normal to see people picking ackee from roadside trees to take home. 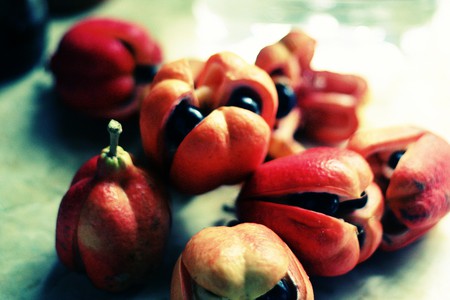 Saltfish is another import and is traditionally made from cod, although today any whitefish can be used (oily fish wouldn’t work due to the drying process). The fish is prepared and then dried before being salted to preserve it. Historically, drying is the oldest form of food preservation known. The northern European nations have been drying whitefish for more than 500 years. Salting was introduced during the 17th century, and subsequently this preserved and nutritious food began to be exported. The triangular trade between northern Europe, western Africa and the Americas introduced this otherwise northern European dish to the Caribbean at a similar time to ackee. Being able to preserve fish in a hot humid climate had a transformative effect on local diet and soon saltfish became a staple. 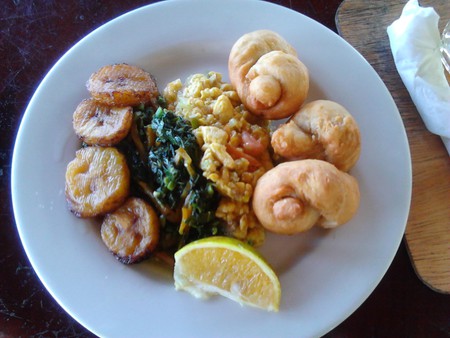 To prepare this Jamaican breakfast staple, the saltfish is soaked to remove most of the salt, and is then broken up and added to the pre-boiled ackee. Both are then sautéed together with a mix of vegetables and seasoning — most common are scotch bonnet peppers, onions and tomato. The dish is usually served with other breakfast dishes such as bammy, callaloo, breadfruit and even good old bacon.