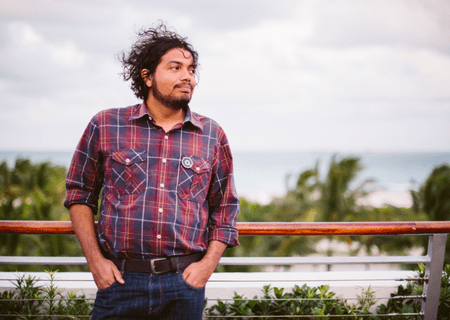 The acclaimed Dominican writer talks about importing and exporting literature to and from the DR. His short story “Karate Kid” appears in our Global Anthology.

In 2013, the celebrated Miami-based poetry festival O’ Miami invited another round of luminary writers to the city to honor the art of the verse. Among the attendees—which included Sonic Youth’s Thurston Moore, poet and memoirist Patricia Lockwood, and inaugural poet Richard Blanco—was Frank Báez, one of the Dominican Republic’s best-known poets and writers. Described by Words Without Borders as “the homegrown Junot Díaz of the Dominican literary scene,” Báez has honed a talent for turning conversant language into fiery rhetoric, a mix of cool observations, pop-cultural connoisseurship, and crackling street smarts. Báez’s sharp-witted observations and visceral existentialism recall the Chilean writer Roberto Bolaño and the Spanish writer Enrique Vila-Matas. His short story “Karate Kid,” in which a narrator and his sister take karate classes alongside the neighborhood bully, is the Dominican selection for our Global Anthology.

Báez is the author of several collections of poetry, many short stories, and a book of essays that is being published in the Dominican Republic. He is also the co-editor of Ping Pong, a DR-based online poetry journal with a mission to instigate more conversations between writers of his native country and writers from abroad.

We spoke to Báez about his writing, the struggles and joys of being a Dominican writer, and how some of his country’s canonical literature has yet to be translated into English. 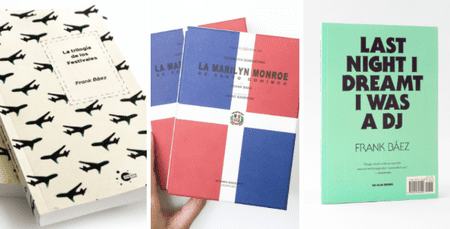 Both your poetry and prose have a contemporary liveliness to them, something that is at once pop-culturally familiar yet also within a separate, more local space. A voice like Roberto Bolaño if he were living in Spanish Harlem. What are some of the ideas or flavors that inform your work?
You see, for a Dominican it is normal for one to drink from different traditions. Maybe a writer from a European country could do his or her work without having to read literature from other countries. But for a Dominican, it is necessary to keep up with what is happening everywhere. So one develops these cosmopolitan interests. On the other hand, stories about the Dominican Republic go largely unpublished, and it has been challenging to figure out ways to address our reality when so few people are interested in writing about it. Yet it seems to me that if we can figure out ways to express this unknown reality, we would be creating something new, interesting, and explosive.

Though you’re more known in the US as a poet, you’ve published an award-winning collection of short stories: Págales tú a los psicoanalistas [For the Psychoanalysts, You Pick Up the Tab] and a work of non-fiction, La trilogía de los festivales [The Festival Trilogy]. Are you still writing prose?
Of course. A volume of non-fiction titled Lo que trajo el mar (What the Sea Brought In) will be published in July. I have also returned to writing fiction, especially stories. 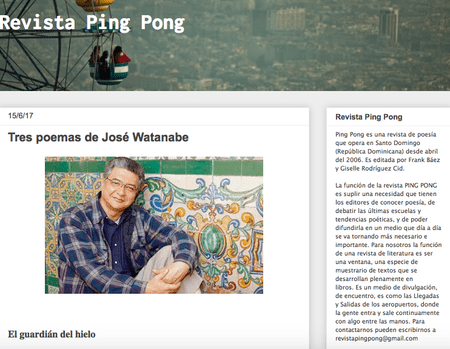 You’re the co-editor of Ping Pong, a Dominican poetry journal that publishes both translations of international poetry as well as many contemporary DR and Spanish-language poets. What do you see as its overall aesthetic and vision? What are some of the differences (stylistic or concern) in Dominican poetry today from, say, 20 or 30 years ago?
Giselle Rodríguez Cid and I started Ping Pong 11 years ago, and in that time our mission as an online poetry magazine has evolved. In particular, we saw a need to address and participate in what was happening internationally in contemporary poetry. The poets here complain that no one reads them abroad, but at the same time, neither are they really aware of what’s going on outside. So we thought it would be great to have a venue where a poet could learn of someone else’s work while at the same time have an opportunity to share their own, hence the name Ping Pong. In the last few years, Dominican poetry has grown particularly varied in style, a result of DR artists now living abroad, and changes in our poetic sensibilities. Whereas “baroque” poetry, similar to that of the “language” poets of the United States, was once popular, now more conceptual and conversational poetry is what is currently in vogue. So is poetry that uses audiovisual media, as well as spoken word, slam, and concrete poetry.

You’ve been given several awards for your work, and you have had your book Last Night I Dreamt I Was a DJ published in English by the Miami-based indie publisher Jai-Alai. How do you (if you do) see yourself as a cultural ambassador of the Dominican Republic? Do you feel you have responsibilities to be vocal about certain issues or topics?
Not at all. I suppose when I’m invited to participate in events abroad, I’ll step a bit into that role, which is totally fine, since I enjoy getting to talk about certain aspects of our culture and our concerns. I mean, as a publisher of cultural magazines, teacher and citizen, I have a bit of an opinion about these things. But I believe that the responsibility of a writer is to write as best they can. In my case, I have given myself a single duty: to document the neighborhood in which I grew up, an area of Santo Domingo known as “Los Kilómetros,” which has not been written about, and if I do not, probably nobody will. I worry that if I do not put those memories and experiences to paper, they will simply disappear. But for me as a writer, the responsibility comes not just in penning some words about this neighborhood—that’s easy—but rather to make what I write original and poetic, so that I do it justice.

The Dominican Republic has a rich literary history, and very close ties to the United States, yet so little of its literature is translated and published here. Why do you think this is? Do you feel like DR writers who have had successes here (like Junot Díaz) should be doing more to bring awareness to DR literature?
I think it’s both an internal and external problem. There is little interest in the United States to translate what comes out here, nor is there much effort from us in spreading our literary heritage. Perhaps this can be attributed to that great barrier—language. For a Dominican writer like myself, it’s always been more fruitful to be published in Spain. But then again, maybe the real problem is laziness. In our country, we lack publishers and major publications. Poetry is only sustained because poetry can survive anything. But for works such as essays or longer narrative pieces we would need a more robust literary sector. And we also need translators specializing in Dominican literature. It is essential that there is interest abroad in having our classics translated and published, especially in the United States, since, as you say, there is a deep relationship between our countries.

To give you a couple of examples of what I mean: the writer and critic Hoyt Rogers translated Manuel Rueda’s Bienvenida y la noche (Bienvenida and the Night) and told me that he felt this novelized account had much in common with the writings of Truman Capote and other southern writers. Unfortunately, he has not managed to find an editor in the United States. Then there is Pedro Mir’s “Contracanto a Walt Whitman”, which was translated by John Landreau and even praised by Allen Ginsberg. But Landreau’s translation was never published; a very poor version by another translator did appear in the 90s… Junot Díaz should be applauded for opening the door to DR writers of my generation and of those who will come after us. He has been a wonderful advocate for our culture and literature, both in the United States and to the rest of the world. But what we need are works that cause a stir, works that put us on the literary map, and our writers on par with the rest of the world.