Meet the Rum Doctor of Dominica 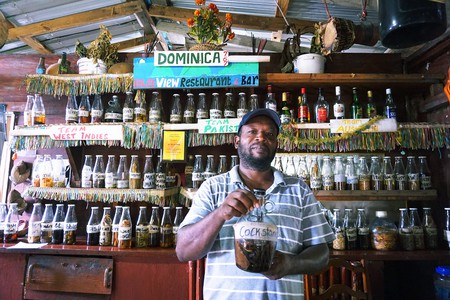 In Dominica, the local apothecary for various ailments serves ancestral elixirs – blends of herbs and rum – that are believed to ease just about any trouble.

Around a twisted corner on one of Dominica’s endless mountainous roads along the east coast sits an inconspicuous-looking bamboo shack. Blink and you’ll miss the hand-painted sign letting you know you’ve arrived at Islet View Restaurant and Bar. The quintessential Dominican bush bar is adorned with rustic wooden decor of dried palm fronds and gourds hanging from the ceiling gently blowing in the sea breeze. Glorious vistas of the bay in Castle Bruce never fail to leave guests mesmerized. 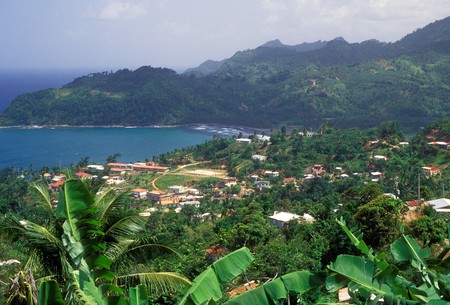 But folks don’t come to Islet View only for the ambiance. They visit for the expansive selection of over 100 homemade infused rums stacked up behind the bar. Some blends have been created to appease tourists’ humor such as the Obama Special and Donald Trump. Additionally, all the typical tropical fruit rum punches are available including mango, passion fruit, and banana, all served in dried coconuts with a hibiscus flower garnish.

But local patrons of Islet View come here for something different. They come to see Eddie St Aimee, the self-declared rum doctor and self-taught herbalist. For the past 10 years, he’s been serving rum concoctions based on ancient recipes. “I serve people various rums. It all depends on the individual,” he says. There’s a rum mixture for every ailment – from heartbreak, erectile dysfunction, or an upset tummy. Other herbal rums are believed to soothe sore throats and cure lingering colds. 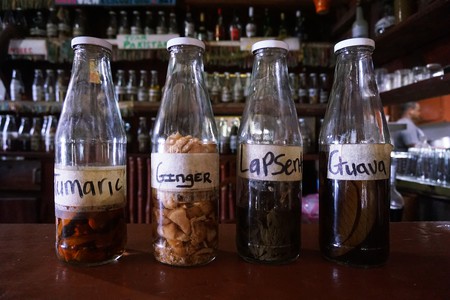 Spice infusion is the most popular bush rum at Islet View. “If someone has the flu, that’s easy – they need to drink spice. It’s a young man’s drink, they say, as it helps you relax after hard work,” says St. Aimee. Spice is infused with cinnamon which is an anti-inflammatory antioxidant. “Spice eases the aches and pains – it’s good for any problem,” he says.

“I love meeting new people and hearing their stories. Sometimes someone comes in the bar and all they need is a couple of strong drinks and someone to talk to and then they’re all good,” St Aimee says. But sometimes he has to interpret the issue and give them a diagnosis. “They’ll talk to me and I’ll give them something based on what I feel the issue is. Sometimes it’s as simple as guava leaf punch for a bad stomach, or as complicated as talking to someone and seeing that they need some peace of mind and giving them soursop so they can rest,” he says. Soursop, also known as guanabana, is used to relieve stomach issues or respiratory problems, or to lower fevers. 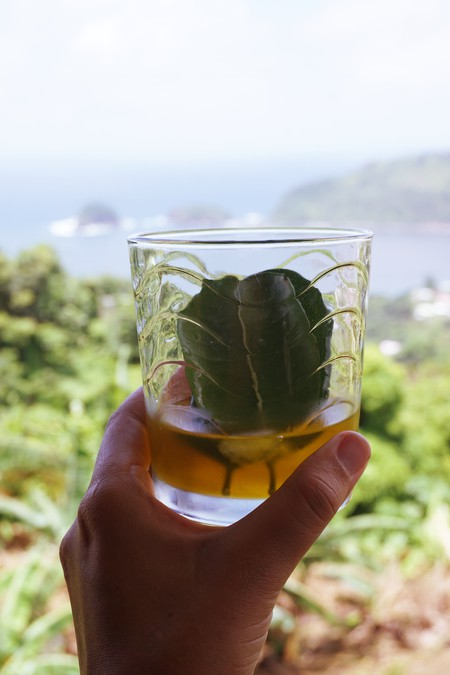 The ingredients for the elixirs vary, but all include a specific fusion of locally sourced fruits, plants, seeds, and herbs. All of the ingredients are boiled before being added to white cask rum around 60% ABV to steep. The brew marinates for two weeks so that it becomes potent.

For instance, the ginger rum punch is quite popular as a cure-all. St Aimee loves to give it to a customer with an upset stomach as ginger is a potent anti-inflammatory. “Ginger can calm nausea, cool fevers, reduce systemic inflammation, soothe ‘sour stomach’ (dyspepsia), and quells flatulence,” he says. In the Caribbean, it’s said that a warm cup of ginger tea offered lovingly “saves more marriages than a parish priest,” according to Dr Amen, a Caribbean naturopath, and fifth-generation master herbalist.

Peppermint is another rum punch that packs a lot of power. “The ability of peppermint to cool a febrile body and settle a stomach cannot be underestimated,” says Dr Amen. If you’re having multiple issues, you can get a customized aromatic blend or throw back several herbal shots for 3 ECD ($1USD) each. For those who don’t drink alcohol, bush tea can be made with similar ingredients. Bush rums are typically consumed straight or with a mixture of coconut water.

Many customers come in to drink cockstand – St Aimee’s favorite bush rum to serve. The remedy is for men who are having sexual performance issues. “It’s a rum with many different herbs. But, I can’t tell anyone all of the herbs. It’s a safe bet for a guy – it will benefit him in some way,” St Aimee says. One of the major ingredients is bois bande which is known as the viagra tree for its natural aphrodisiac qualities. It’s been used for centuries as a love potion for libido as it improves circulation which is effective for erectile dysfunction. “Bois bande is considered to be an aphrodisiac. Herbs with a strong aphrodisiac reputation for men affect blood pressure (hello erections!) and thereby should be used with caution,” says Dr Amen.

Some rum punches claim to help with paranormal issues as well. “Many bush rums can be used to ward off evil such as the old reliable garlic rum,” St Aimee says. But he claims that the strongest potion to fend off dark magic is Twef. “It’s a three-leaf herb that I recommend when a customer feels that someone has done something bad. It’s a ‘break the spell’ kind of rum.”

Bush rums can’t be recommended as a replacement for traditional medicine when it comes to serious health issues. But, if you’re suffering from a heartache, it can’t hurt to take in the natural beauty of Dominica while sipping on a bespoke cocktail or two that might just ease your troubles.