Aerial view of the Hotel Nacional, Havana | © Thomas Münter / Flickr
Unlike beach resorts and newly built hotels in mountain and natural areas, many hotels in Havana are true cultural and historic attractions, with a lively cultural life featuring art shows, live music performances by some of the best bands in the country, movie festivals and symposiums, and cabaret shows, among other events. If you want your accommodation to be as exciting as any art gallery in the city, here are a few options to consider.

Hotel
Hotel Nacional, Havana | © Linus Henning / Flickr
A historic and cultural landmark, the Hotel Nacional de Cuba is a big attraction for those staying at the hotel and those who aren’t. Built in 1930 on an old battery overlooking the Malecon, the hotel has had a long list of illustrious guests stay at their establishment, from famous actors to heads of state, including Marlon Brando, Frank Sinatra, Rocky Marciano, and Marlene Dietrich, among many others. Its Cabaret Parisien offers Cuban music and dance shows, and there are many other nightclubs within walking distance of the hotel. It is also one of the main venues of the Latin American Film Festival, one of the most important in the region, held every year in December with the participation of renowned filmmakers from all over the world.
More Info
Open In Google Maps
La Habana, La Habana, 10400, Cuba
+5378363564
Visit website

With a lobby bar where traditional Cuban bands perform every day, the Hotel Ambos Mundos is famous for its links to American author Ernest Hemingway, who lived there for most of the 1930s before taking residence in Finca Vigia. The room that he occupied on the 5th floor (Room 511) is now a mini-museum that looks the way it did when Hemingway lived there, and interested parties can visit it during the day. Located on the main artery of the old quarter, Obispo Street, it is a great place from where to enjoy street performances by stilt walkers and soldiers in 18th-century costumes. 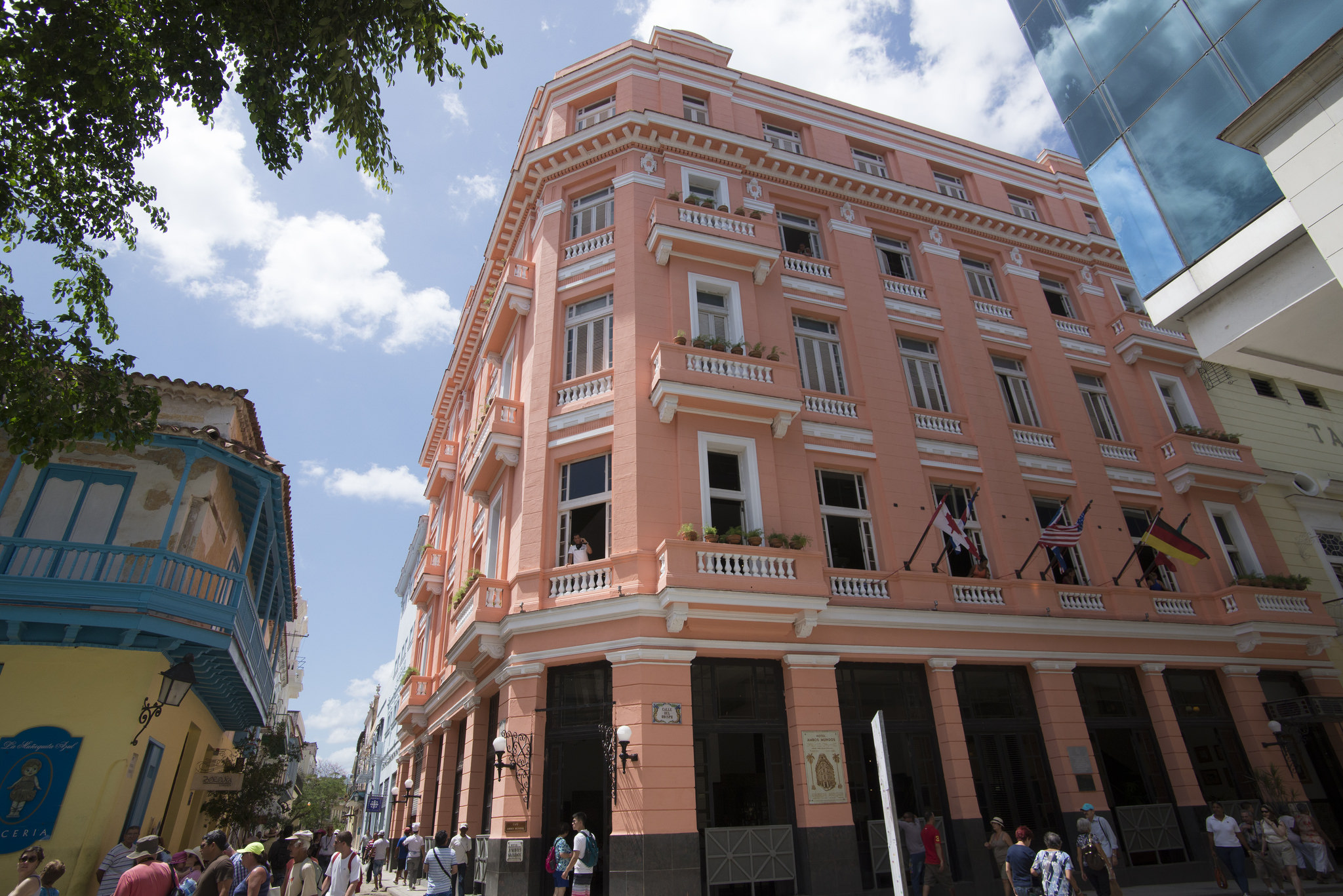 At a fantastic location near the main attractions of the old part of the city, Hotel Inglaterra is one of the oldest in the country, and supposedly, in December 2017, it’s to become the second hotel managed by a U.S. company in Cuba, following the re-establishment of relations between the two countries. The atmosphere at this hotel is consistent with its traditional style, with smoking areas to enjoy Cuban cigars and different restaurants and patios where bands perform the classics of Cuban son and other local genres. It’s across the street from the National Museum of Fine Arts and close to the many art studios near Prado Street. 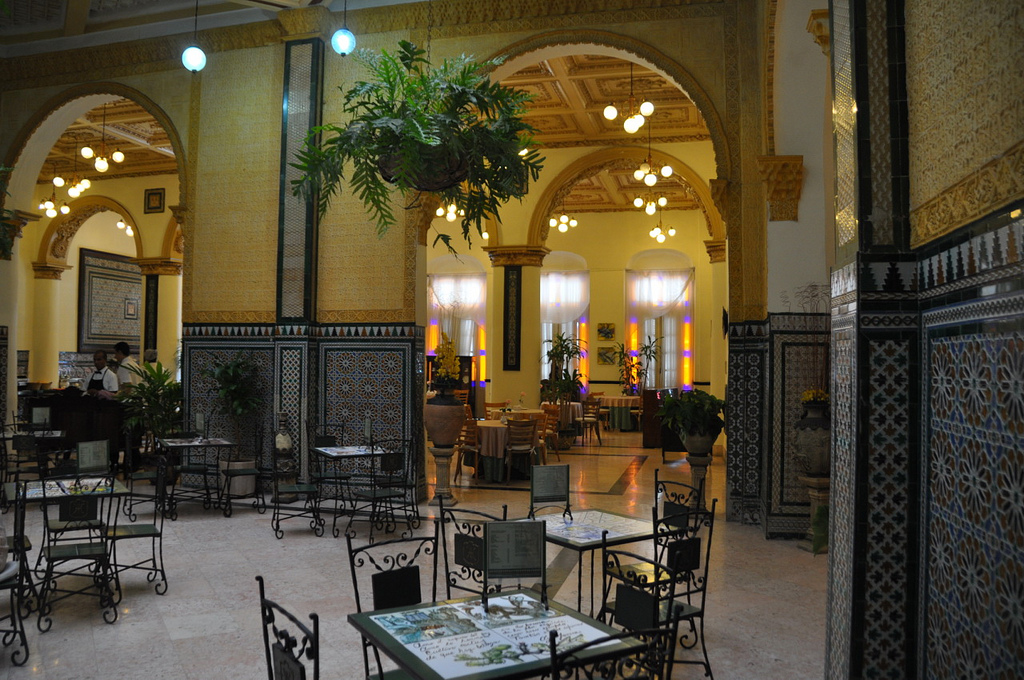 Hotel
Hotel Riviera, Havana | © Leandro Neumann Ciuffo / Flickr
The Hotel Riviera still preserves most of the decoration, furniture, and style that made it one of the most glamorous hotels in Cuba in the late 1950s. Originally owned by mobster Meyer Lansky, it was one of the hotels built as part of a plan to start a new Las Vegas in Havana, which soon failed when the 1959 revolution and the system that followed outlawed gambling and casinos. The place offers different cultural attractions, including a cigar shop, and the Copa Cabaret, where the most important salsa bands perform regularly.
More Info
Open In Google Maps
Hotel Habana Riviera La Habana, La Habana, Cuba
Visit website

Hotel
Sharing the same street block with Hotel Inglaterra, Hotel Telegrafo is also near some of the city’s main cultural attractions. It’s famous for having been the place chosen by archaeologist Heinrich Schliemann, the discoverer of Troy, for his stay in Havana, and a plaque at the hotel commemorates the visit of the distinguished guest. The hotel, which reopened in 2001 after a three-year reconstruction, is a modern establishment where little of the old construction is preserved.
More Info
Open In Google Maps
416 Paseo de Martí, La Habana, La Habana, 10600, Cuba
+5347483647
Visit website

Hotel
Located on the busiest corner of Vedado, Hotel Habana Libre (Free Havana Hotel) is one of the splendorous hotels that saw the light in Cuba in the late 1950s and operated only for two to three years before being expropriated by the government that came to power in 1959. A giant mural by one of Cuba’s greatest female painters, Amelia Pelaez, welcomes visitors at the entrance. Private restaurants, movie theaters, television studios, and important local landmarks such as the Coppelia (an ice cream parlor) and the central campus of the University of Havana surround the hotel.
More Info
Open In Google Maps
Calle M, La Habana, La Habana, Cuba
+5378346100
Visit website

Hotel
Rooftop pool at the Hotel Capri | © Catherine Read / Flickr
Another hotel from the 1950s once owned by American mobsters, Hotel Capri first opened in 1957 and reopened in 2014 after major renovations. Located in the same section of Vedado where the Hotel Nacional and the Hotel Habana Libre are, it’s a good point of departure to explore the many local nightclubs, restaurants, and art galleries in this part of the city. It is within walking distance of the University of Havana and the Napoleon Museum.
More Info
Open In Google Maps
Calle 21, La Habana, La Habana, Cuba
+5378397200
Visit website