Felix Gonzales Torres | Of Love And Other Demons

Cuban-American Artist Felix Gonzales Torres’ polemic work deals with complex themes such as loss, love, separation, and death. Using mundane objects such as stacks of paper, light-bulb strings and wrapped candy, Gonzales-Torres invites the audience to become an active figure in the reception of artworks and, in light of his activism against the AIDS epidemic of which he himself became a victim, of their political and social implications. 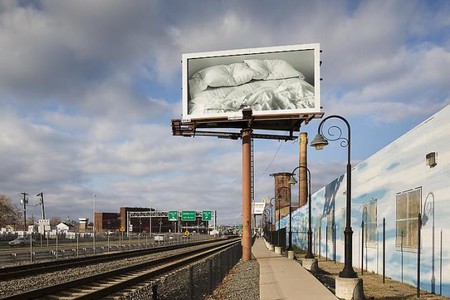 Born in Guáimaro, Cuba, Gonzales-Torres left his homeland at an early age, finally settling in New York City in 1979 with a study fellowship. His enrollment at the Whitney Independent Museum Program would become a definitive influence upon his artworks, as his exposure to Critical Theory awarded him a highly adaptable source of content, the writings of French thinkers Michel Foucault and Nicolas Bourriaud in particular. As an openly gay visual artist, Gonzales-Torres was drawn to these thinkers, who saw art as a crucial agent of social change, especially when challenging the status quo. The majority of the artworks, Gonzales-Torres realized, despite their quiet, elegant aesthetic, are socially engaged political statements. For instance, he only uses ‘suggested’ titles and most of his artworks bear the official name ‘Untitled’, with a brief hint of his own ‘personal’ title. He believed this made the audience free to choose whatever title the piece was best suited for, believing the name and context of an artwork, when shown to a spectator, could be a political act. 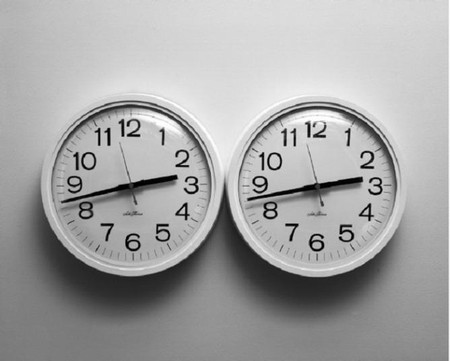 In Untitled (1991), a photograph of an unmade bed featuring two pillows with bodily indentations was placed around different locations on New York City billboards. The content of the photograph itself is highly personal: it is the bed that Gonzales-Torres shared with his lover (also a victim of AIDS) Ross Laycock. In a subtle, extremely poetic trope recalling playwright Bertolt Brecht, Gonzales-Torres occupied the public space of a large city to display his intimate life, and by doing so, he wished to challenge norms and customs held as ‘mainstream’. The unmade bed of two homosexual lovers was suddenly in the public sphere; both persons would eventually die of AIDS, and yet homophobia and apathy were still rampant in the majority of Western culture. The piece remains unresolved, inviting the viewer in present tense to be an active thinker. It is these provocative, yet exquisitely confrontational works that came to define Gonzales-Torres’ artwork. 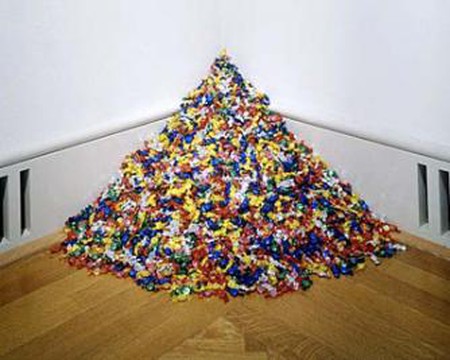 Most artists need a muse, and for Gonzales-Torres, it was his lover, Ross Laycock. In several interviews, Gonzales-Torres would always reiterate the fact that he made all his works with Ross in mind as his principal ‘audience’. His work Untitled (Perfect Lovers) (1991), consists of two identical clocks synchronized to mark the same time, but by doing so reiterating the fact that these two clocks will eventually fall out of sync, going in different directions. Even in our most perfect unions, it will be impossible to avoid the simple yet undeniable force of time. In Untitled (Portrait of Ross in LA) (1991), sweets wrapped in shiny, multicolored foil are placed in a pile, amounting to 175 lbs. roughly equivalent to Ross’ ideal weight. Viewers are invited to take one, consume it, and thus ‘consume’ the artwork. The pile would eventually be replenished, offering the possibility of rebirth. There are several questions here: Whom does the artwork address? Why are we complicit in this work? Mental apathy and lack of active engagement are the enemies of any socially engaged art form, according to Felix Gonzales-Torres. Yet his highly intellectual, cerebral works are transformed into clear, concise, almost ‘audience-friendly’ pieces by virtue of this personal, human dimension.

Addressing gay identity is also an integral part of Gonzales-Torres’ work, but not as a manifestation of resentment or finger-pointing. Untitled (Go-Go Dancing Platform) (1991) consists of a wooden platform decorated with light bulbs. At unannounced moments, a topless male dancer in a silver bikini would enter the room and dance on top of the platform. By re-creating part of gay nightclubs and so-called ‘alternative lifestyles’, the artwork, instead of confronting the viewer, inserts an unexpected event in a relatively neutral context, albeit an event laden with moral and ethical questions left unresolved. 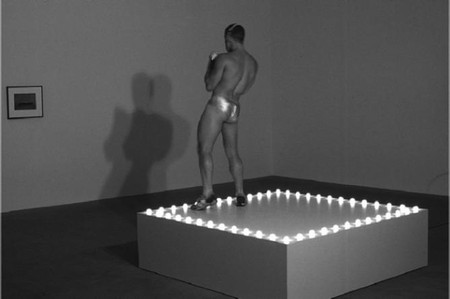 This theater of active participation and involvement of the audience continues throughout Gonzales-Torres’ work, often addressing the issue of the public versus private domain. In (Untitled) (1988), a reflective surface reads several dates with incongruous phrases. For example, ‘Supreme Court 1982 Crash Market Center for Disease Control 1981’ in which apparently unrelated, yet highly political events with corresponding dates, are placed together and, by utilizing a reflective surface, forces the viewer to ‘step inside’ these events. Many of these pieces were also displayed as stacks of paper and billboards. In Untitled (1989) – created on the 20th anniversary of the Stonewall Rebellion, a series of violent demonstrations for the rights of homosexuals – the public was invited to take one piece of paper home and thus be complicit, not in past historical events, but in a present tense reaction to these. Gonzales-Torres also applied his public/private dialogue when elaborating his dateline pieces as portraits, such as Portrait of Jennifer Flay (1991) in which dates and events crucial to the lifespan of the ‘sitter’ are placed around the walls of a gallery or museum non sequitur, thus implicating the viewer in highly personal, intimate events of an unknown individual. 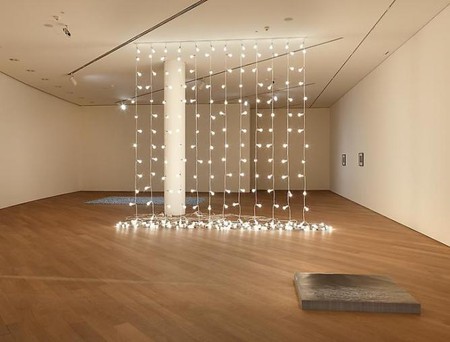 Perhaps his most delicate works are the light bulb pieces. Untitled (North) (1993), sees strands of light suspended from the ceiling, some gently resting on the ground. Each strand represents a human being that, at any course of the installation’s duration, might be extinguished. While the strands act as reminders of our inter-connections as humans, the light bulbs also represent the inevitability of death. Hope, however, is never far from Gonzales-Torres’ works; as each light bulb is extinguished it will, eventually, be replaced by another one. His strength as an artist is engaging with themes that deeply affected his personal life. In so doing he offers the radical notion that these are issues we should all be concerned with: personal issues are at the crux of the relationship between man and society. 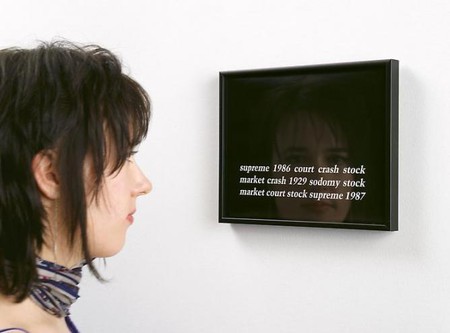 Gonzales-Torres’ works, which are against homophobia and public apathy towards the AIDS epidemic , are represented visually, not merely as statements of anger, but as elegantly manufactured formal extensions of the mediums that he has at hand. In Placebo (1991) a limitless supply of candies wrapped in cellophane, placed in a perfect rectangle, evokes minimalist works. Yet the work is imbued with a more cogent clarity. Inviting viewers to take one piece of the sculpture with them, Gonzales-Torres’ works transform the notion of a static object into a form of aesthetic dialogue. The work of Gonzales-Torres adds, by virtue of placing a human and personal dimension, themes left open by the starkness of works of conceptualism and minimalism. He died of AIDS-related complications in 1996, leaving behind a monument to art, humanity, and the spirit of poetic struggle.