Black Market Wi-Fi is a High-Stakes Game in Cuba 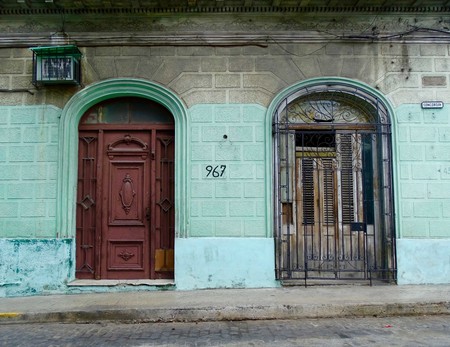 It’s 11 p.m. Six people huddle in the living room of a casa particular (also known as a private house in Cuba), eyes fixated on their phone or laptop. “You got it?” “Nope, it cut out.” “Wait, I think it’s back on again.” “How long?” “Twenty minutes.” And then, silence. There’s a connection, however brief, to the ‘outside world’ from Havana.

The struggle for Wi-Fi in Cuba isn’t just an American first-world travelers’ problem—it’s become such a commodity that there’s an entire black market surrounding the coveted connection. The internet can only be accessed in public parks and hotels by purchasing one-hour cards for CUC$1.50 from government-controlled ETECSA kiosks. These stands are hard to find, and are normally accompanied by long lines, with even longer wait times. But waiting in long lines is a way of life in Cuba, and when it comes to the internet, connectivity is rationed in the same way that food is—sometimes it’s available for purchase, sometimes it’s not. 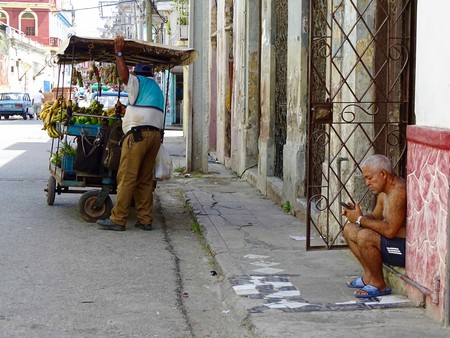 Each kiosk is permitted to sell a certain number of Wi-Fi cards per day, with an 18-digit login code and 18-digit password, and they frequently sell out by early afternoon. When this happens, just like a line for concert tickets, you’re simply out of luck for the day. But outside of the long lines, set time periods, and scarcity, there’s another option for connectivity—the Wi-Fi black market.

“It’s out again.” Another brief silence. “I’m going to get another card.”

Late in the evening in Havana, the kiosks that sell Wi-Fi cards are closed. Plus they can only be used inside the neighboring park anyway, which consists of a few trees for shade and raw concrete benches, with productivity limited to hour-long spurts. No one wants to sit in a park with a laptop in the dark, or even under the glaring July sun for that matter. But when internet connection occurs inside an actual home, it’s highly illegal. Despite all of this, despite the risks, the struggle for connectivity is everything. 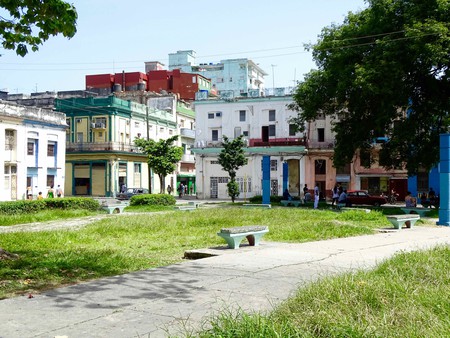 Cubans are known for their ingenuity and resourcefulness; simply look at how the population have managed to maintain their American cars since the U.S. embargo began, over 57 years ago. So when it comes to Wi-Fi, they also have a work-around. According to the International Telecommunication Union, only about 7.5 percent of Cubans have internet access in their home, and for the rest of the population, access is restricted to public areas. Most private internet routers aren’t supposed to exist in Cuba, but they do.

Wi-Fi hustlers aren’t supposed to exist either. Wi-Fi hustlers have taken to selling cards on the black market—a transaction that feels vaguely like a seedy drug deal in the shadows of the park. You can spot the hustlers as you would any other drug dealer in an urban Western city: standing under a light post, with a knowing, watchful gaze, shrouded with an air of danger. The “guy,” once pointed out, asks how many you want, leaves for a moment to retrieve the goods, and returns with a slip of paper good for one hour of internet time, in exchange for roughly double the rate of the kiosk price. Afterwards, you can either swiftly return home to get your fix in private—assuming you have your own connection—or stay under the watchful gaze of the park surveillance to use the public Wi-Fi. 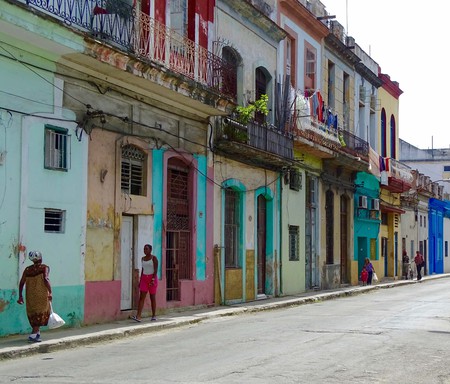 The police know that Wi-Fi hustlers exist, as well as the secret routers, but either choose to turn a blind eye to it or are paid off. The average monthly salary in Cuba is only around $30 per month, and the National Revolutionary Police Force in Cuba, like the rest of the working population, is subject to similarly low monthly salaries. Everyone has a side hustle here, even the police.

When it comes to the black market routers, neighbors will share their username and password with a select few, by using a wireless network extender. Once a private router is accessed, anyone can tap into the system by using a single Wi-Fi card. The card, either purchased from the kiosks or the black market, can be shared on private routers. By tapping into the network using the router login, an active Wi-Fi card “unlocks” an hour’s worth of time for anyone within range. 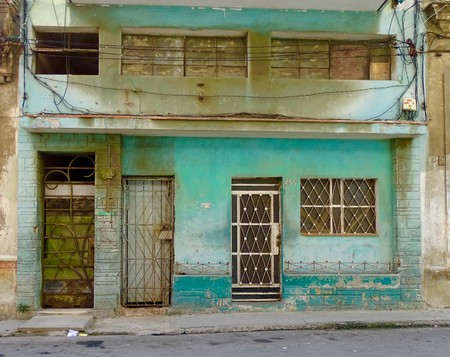 Each card is a coveted commodity, yet it’s shared freely. In this way, using the internet becomes a community affair, a social activity performed in silence. If you walk by a house in Havana, the windows will typically be open, exposing the open living areas of families. You’ll see a group of people sitting around the living room glued to their phones; it means someone has a Wi-Fi card, someone has turned on a secret router.

While the Wi-Fi is limited and hard to come by, those brief periods of “interconnectivity” are exhilarating, rushed, and savored. Accessing it does feel like a drug—a temporary high of information—a sudden burst of connectivity, and then, minutes later, nothing. It all goes black again.

NPR reported in 2016 that “only about five percent of Cubans can get online—one of the lowest internet penetration rates in the world,” and that some of the black market cards actually come from ETECSA workers. Surely the government knows that this illegal activity occurs, especially when it comes to home routers, and perhaps they even profit from allowing it to happen. 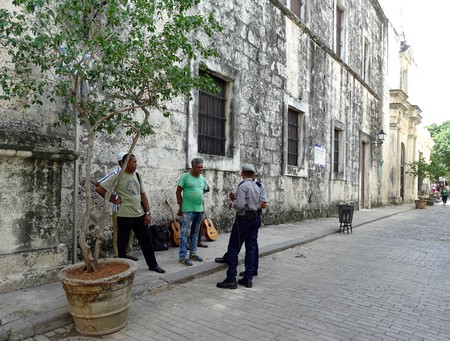 “We do not know the strategies and methods used by the Cuban police, not in detail at least,” writes journalists Claire Voeux and Julien Pain in a separate article for Reporters Without Borders. “Internet surveillance seems to be to be fairly haphazard, with the level of vigilance varying from hotel to hotel, and from computer to computer.” The same article reports a five-year sentence just for connecting to the internet illegally.

Perhaps limited accessibility is due to either the lack of technological infrastructure, the U.S. embargo, or it’s a byproduct of authoritarian control. Either way, one thing is sure: by creating such tight restrictions on going online, the black market is thriving.

Many of us in the Western world, already view the ‘outside’ through our prospective windows—whether it’s from a front porch window or through unlimited data plans. It’s just in the United States, we take for granted the endless stream of connectivity, our mindless hours of endless scrolling. At least in Cuba you’re truly “present.” But even as an outsider, you have to hustle for connection. Just as some Cubans want to leave their island, yearning to see the raw uncensored world, there is a silent fight for access to the coveted world wide web—to freely exchange and access knowledge. 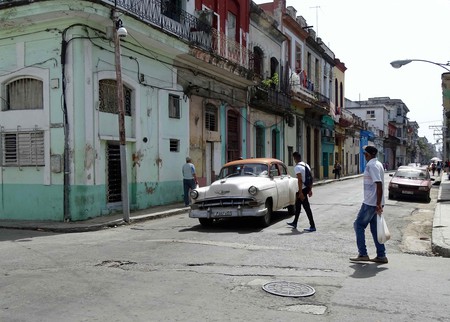 By regulating the internet so intensely, ensuring that no one can access it freely or at their leisure, the mechanisms of power flourish. This is not the revolutionary era of Fidel and Che, where guerrilla warfare can overthrow dictatorships. In our present age of digital technology, the burgeonings of a “new revolution” would occur through informational exchange, uncensored knowledge, and global connectivity. Well aware of its stronghold on the Cuban people, the struggle for Wi-Fi behind the black curtain is, perhaps, one of the strongest ways the government holds its power. 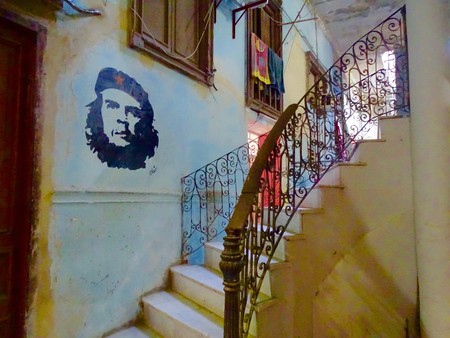 An image of Che inside a hallway of a mixed-used building | © Amber C. Snider
Give us feedback