A Brief Introduction to the Museum of the Revolution, Havana, Cuba

The decision to found a museum that told the story of the Cuban Revolution came soon after the 1959 victory against the Batista dictatorship. The horrors of the ousted dictatorship had been so gruesome, and the sacrifice of its opponents had been so heroic, that collecting the evidence and showing it to the world seemed like the logical thing to do.

After moving from building to building following its foundation in December 1959, the museum found its definitive home at the former Presidential Palace in 1974. In its efforts to rebuild the country, the new government had undertaken this sort of eloquent re-purposing of buildings, turning barracks that had been used for torture into elementary schools, and installing daycare centers for working-class families in mansions that had been expropriated from the very wealthy.

The Presidential Palace, which for 40 years had served as the headquarters of the Cuban presidency, was given up to for a museum.

Mural celebrating the victory of the Rebel Army, Museum of the Revolution, Havana | © Calflier001 / Flickr

Cuba’s answer to the American White House for most of the first half of the 20th century, this building was the country’s opulent face to the world—the place where the presidents would meet important visitors, and where ambassadors to Cuba would present their credentials.

Originally, it was destined to be the headquarters of the provincial government (that is, the Havana Governor’s Office), but following a visit to the construction site by First Lady Mariana Seva in 1917, arrangements were made for the place to host the president’s office instead. 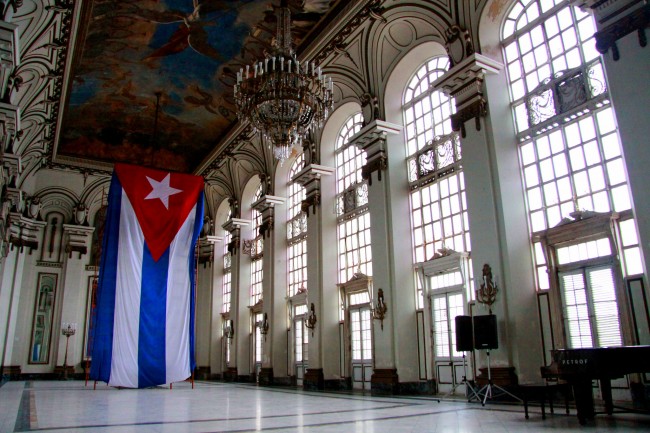 At its inauguration on January 31, 1920, it was one of the tallest buildings Cuba. The ground floor housed offices and administrative facilities, including a telephone plant, a power plant, and a stable.

The president’s office was on the first floor with the rest of the most important rooms of the building: the Hall of Mirrors (a replica of the one at the Palace of Versailles), the Golden Hall (with walls plated with yellow marble), a chapel, and the Council of Ministers’ central office. 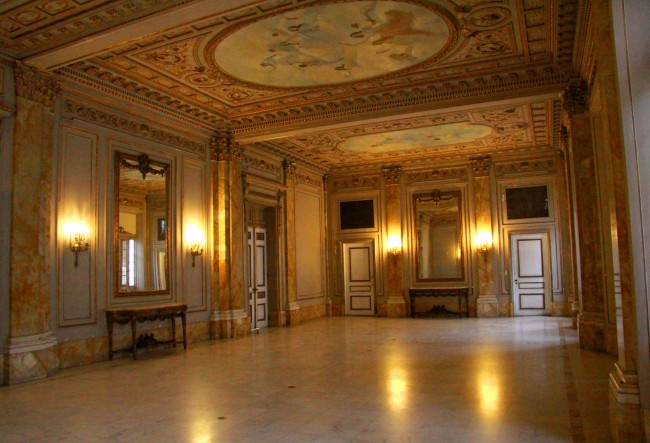 The presidential residence was on the second floor, and the force in charge of the president’s protection, on the top floor.

The dome that tops the building, a nice addition to the original project, is plated with colorful tiles that make it stand out even more when the sun reflects on them.

The inside of the building is of an impressive beauty: a Carrara-marble staircase gives access to the upper floors from the lobby, and the interior decoration, commissioned to New York’s Tiffany Studios, features Cuban-themed motifs, luxury furniture, and works of art by some of the most important Cuban artists of all times, including Armando Garcia Menocal and Leopoldo Romanach. 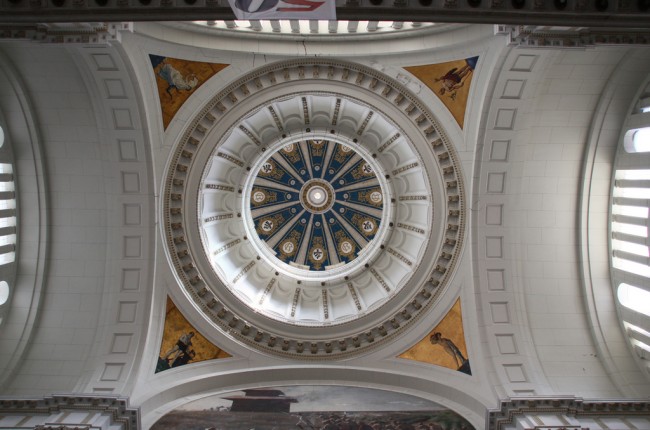 Located very near Parque Central in Old Havana, more accurately on a large block formed by Refugio, Avenida de las Misiones and Zulueta streets, the Museo de la Revolucion is an important point of reference when trying to understand how Cuba came to be what it is today. 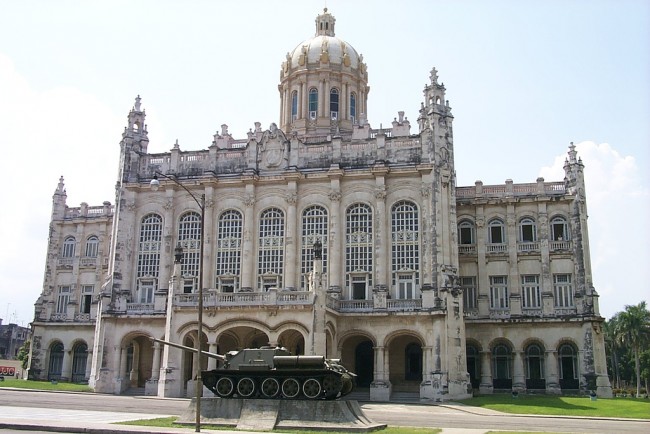 Although the collection includes historic pieces dating back to the early years of the Spanish colonization in the 15th century, the core of the display is the objects linked to Cuba’s struggle to put an end to the dictatorship of Fulgencio Batista in the 1950s.

The rebel movement led by Fidel Castro and other opposition groups were a reaction to the unbearable conditions that the Cuban people had to suffer under the Batista government.

The popular support that the movement received in 1959 was in part a big “thank you” for having put an end to that nightmare.

The objects that were preserved from the war against Batista from 1953 to 1959 tell the story of a dictatorial regime that practiced torture and murder against its opponents, and that was equipped with state of the art weapons, planes, and vehicles.

From tweezers and shackles used to pull the nails of the detainees, to gas torches used to burn their backs as a form of torture, the collection is very graphic and spares no detail. 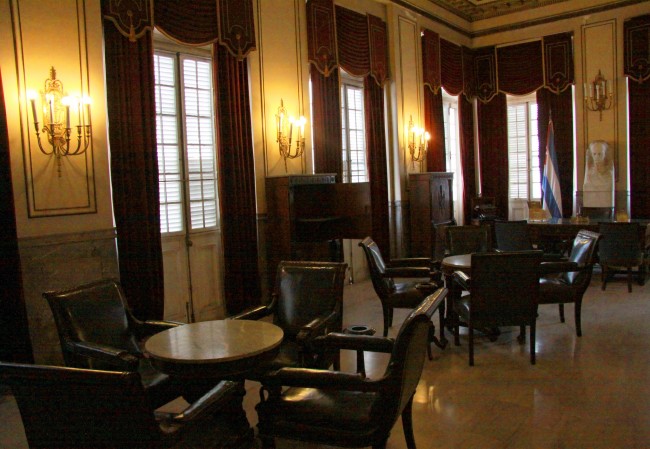 In fact, at times one may get the feeling that the level of detail is a little overwhelming, and that the exhibit could have been summarized to tell a more general story. However, bear in mind that the museum was originally designed for Cuban visitors, for whom many of the objects may be more interesting, given their more ample background about the events, or even their personal links to the history of the country.

Although having some knowledge of Cuban history and speaking Spanish may be an advantage, the visit can be as interesting with the help of a guide. Tickets cost CUC$5 (US$5), plus CUC$3 (US$3) for the guide’s services (which you may choose not to use). Bags and backpacks are not allowed, and must be deposited at the entrance.

The second floor is the logical starting point for a visit: it opens with the colonial period (15th century), moving then to the American intervention in the war against Spain (1898), and then to the Republican period (1902–1959), considered by Cuban official historiography as a neo-colonial period due to the control that the U.S. exerted over Cuba’s politics and economy.

The pre-liberation history concludes with the abovementioned extensive display of objects linked to Fidel Castro’s 26 of July Movement: from the first armed actions against the regime in Santiago de Cuba in 1953, the trial that followed for the participants, their imprisonment, amnesty, exile, return to Cuba on board of a yacht from Mexico, and the final war fought in the Sierra Maestra mountains in the eastern part of the country.

Sculptures of Che Guevara and Camilo Cienfuegos—a fellow commander of the Rebel Army—is one of the main attractions, especially for school children who learn about the heroes in school, and then get to see them in their uniforms as if they were still alive in the mountains. 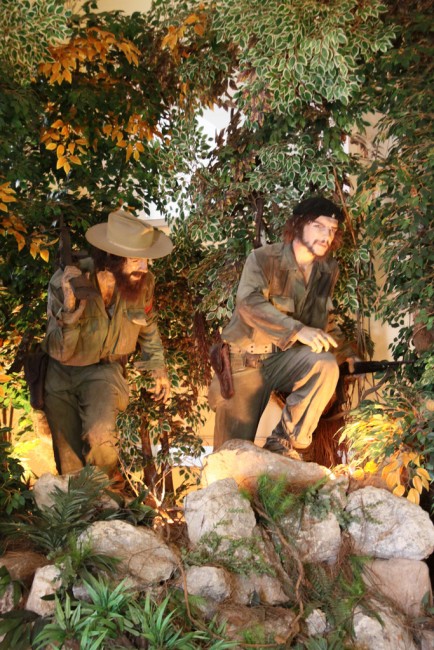 Relevant for this last historic period also is the building itself: in 1957, the Presidential Palace was object of an attack by an anti-dictatorship group, the Revolutionary Directorate (DR), whose goal was to assassinate the dictator in his own house. The attack failed and most of the participants were killed. Bullet holes from those events are still visible in the main stairway at the entrance, and in the outdoor exhibit there’s a red delivery truck used by the attackers as a cover to be able to get close to the building.

The first floor covers the period extending from 1959 onwards, with more emphasis in the early years of social, political and economic transformations. A big highlight is the Bay of Pigs invasion (1961), that the Cuban forces were able to counter in only 3 days. The tank used by Fidel Castro in those events can be seen outside the main entrance. 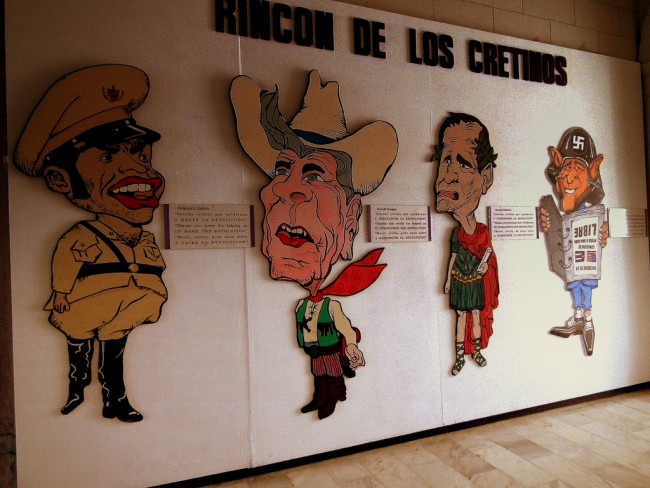 The back doors of the ground floor lead to another exhibit outside: the Granma Memorial. The central piece here is the Granma Yacht, visible from behind a glass cover. Standing that close to the yacht, it is impressive to think that 82 people fit in the tiny boat in the journey from Yucatan to the eastern part of Cuba (Oriente). 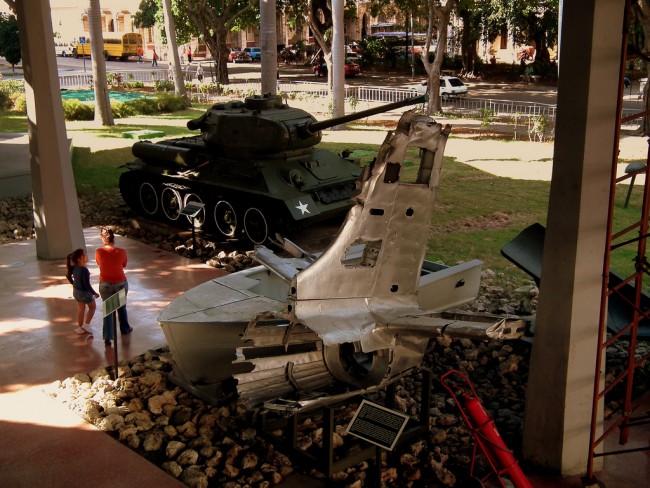 In addition to other large vehicles, the memorial includes a permanent flame burning in tribute to the Eternal Heroes of the Motherland. 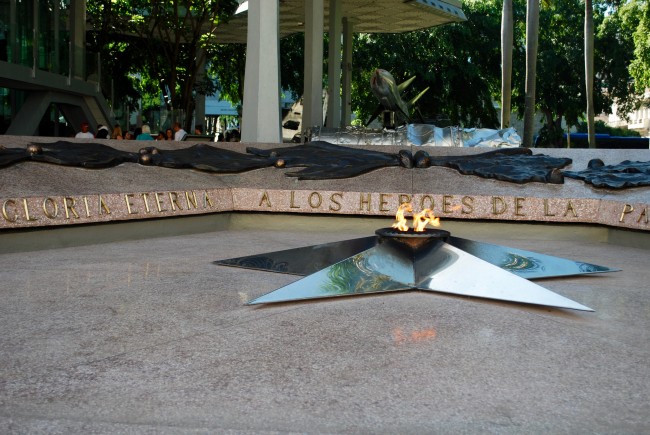