10 Thrilling Things To Do in the Cayman Islands 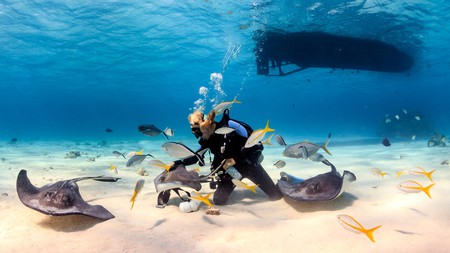 The Cayman Islands might be a tiny territory at the heart of the Caribbean Sea, but it packs a huge punch with a plethora of exciting activities to enjoy.

Here are some of the thrills you’ll find on the islands of Grand Cayman, Cayman Brac and Little Cayman – from meeting friendly stingrays and kayaking to ancient mangroves, to top-quality parasailing and kitesurfing.

Go on a horse ride at Barkers

Barkers National Park, which links West Bay with the North Sound, is one of the last undeveloped gems of the Cayman Islands. The verdant surroundings and unspoiled beaches give a sense of timelessness, and you can experience the beauty of the beach firsthand on horseback with local experts to guide you. Trot along the shore or splash with your steed in the waves on a two-hour tour. 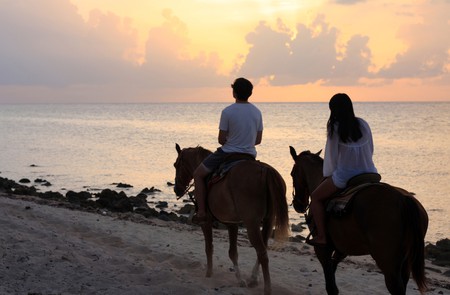 Parasail and kitesurf at Barkers and Seven Mile Beach

Parasail on the island breeze as you climb up to 500ft before being towed behind a speed boat. It’s also an experience you can share with friends – most Cayman companies are licensed to haul 400lb in weight. There’s also the opportunity to kite surf at the Kite Beach in Barkers National Park or on Seven Mile Beach. Depending on the conditions, you’ll encounter winds of 15-20 knots which is ideal for a quality ride skating over the waves. 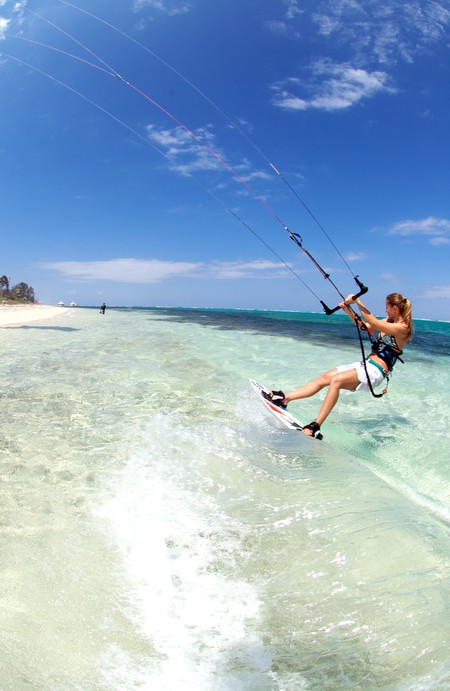 Hit the waves on a surf or paddleboard

Cayman may not have the 30 feet waves of other destinations, but the relatively gentle swells at South Sound’s aptly named Surfer’s Beach can still deliver. In the winter months, the Cayman Islands experience winds coming in from the North West. These Nor’Westers – as the locals call them – stir the waters and provide some bigger waves as a result. Stand-up paddleboarding is also very popular where the waters are still, and most watersports operators offer equipment for hire. 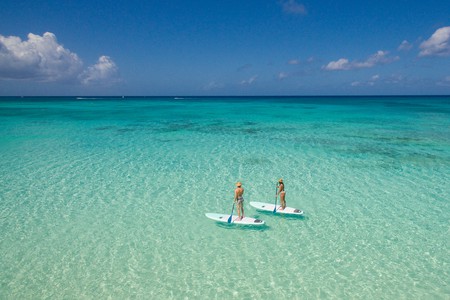 Waverunners – also known as jet skis – are a great way to navigate around Grand Cayman. You can join guided tours with most of the many watersports outlets on-island, and these will take you to ace snorkelling spots such as Stingray City, Cheeseburger Reef or Rum Point (where you can indeed get a drink of the pirate’s favourite tipple). Book a two-and-a-half-hour Stingray City tour to experience the best of the wildlife along the sandbars. 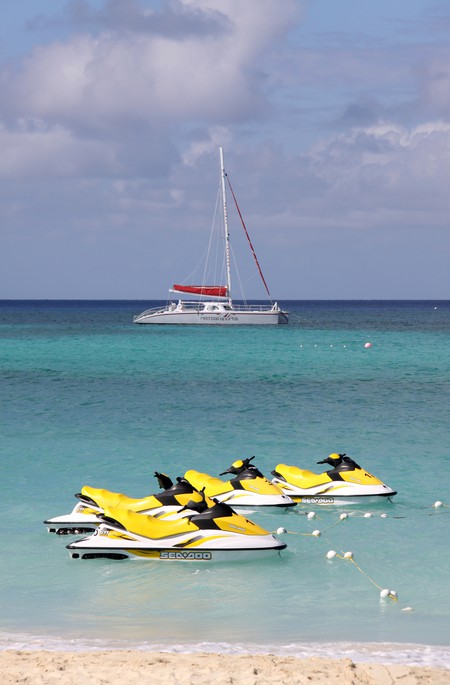 See Cayman from a helicopter

To get a real sense of the Cayman Islands, take in the view from up high. Tours by helicopter include flights over Seven Mile Beach, the world-famous Stingray City or a whole island experience that takes about 45 minutes. You’ll see a lot in a speedy and thrilling ride, including the famous Kittiwake Shipwreck site. Private charters are also available if you’re willing to really splash out, and can take you as far as Cuba or Jamaica. 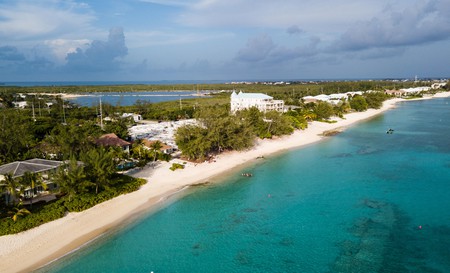 You don’t always need high speeds or high altitudes to get your thrills. Indeed Grand Cayman’s Bioluminescent Bay, near Kaibo, is a real highlight. Tiny phytoplankton called Pyrodinium bahamanse live in the bay, sparkling at rest and giving out a special glow when disturbed. You can kayak from Rum Point to the site, which lights up around half an hour after the sun goes down. The darker the night, the greater the effect. 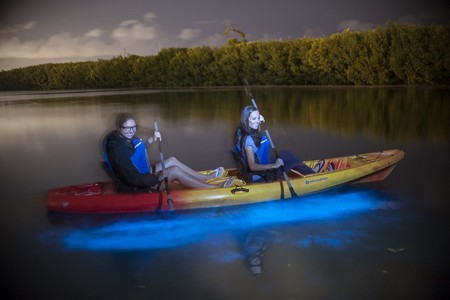 Get around by kayak

The Cayman Islands comprise the peaks of the Cayman Ridge, and are all surrounded by coral reefs. This makes for beautiful, calm waters on which to kayak solo or in pairs. Get around at your own pace – guided tours include an informative and intriguing mangrove adventure. One very popular route involves kayaking from Little Cayman to its even tinier uninhabited island, Owen Island. It’s around 25 minutes at a gentle pace and is also within swimming distance. 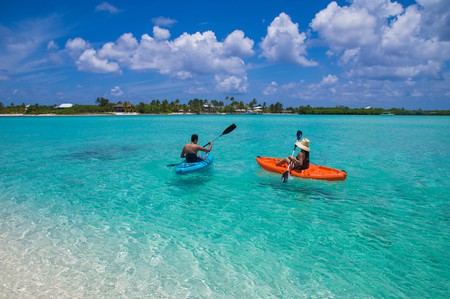 Grand Cayman has 365 dive sites and dramatic sea walls that are a real treat for divers and snorkellers. Sister island Cayman Brac also boasts The Lost City of Atlantis – a huge collection of sculptures at Radar Reef – while Little Cayman’s Bloody Bay Wall has masses of beautiful spots to swim through. Wreck dives are also plentiful, including exploring the Kittiwake – a decommissioned submarine rescue ship which was officially sunk in 2011 to create a new artificial reef. A whale shark has been spotted at the Kittiwake, although you’re more likely to encounter swordfish, sergeant major fish, lobsters and turtles. 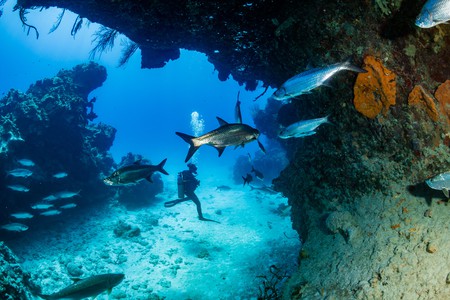 At Stingray City, an abundance of these beautiful, friendly creatures congregate near the sandy shore to mingle with swimmers. A dip here is one of the most exhilarating things to do on Grand Cayman. Tours give you the chance to feed the rays and swim with them, as well as take plenty of photos. 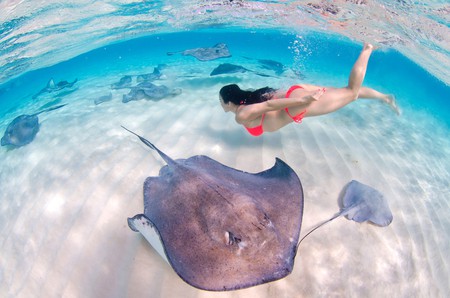 For a glorious ramble around Cayman Brac, the ancient Parrot Reserve off Lighthouse Road is the perfect spot. It has a rugged, two-mile trail that’s perfect for nature lovers and birdwatchers. The protected reserve is home to the endangered Cayman Brac parrots, and you might be lucky enough to spot them as you pass by plenty of unique wildlife and foliage.