House Of Spirits: The Visionary Art Of Gladwyn K. Bush

Known for her seafaring and Christian inspired works, the artist Gladwyn K. Bush has had a lasting cultural impact on the Cayman Islands with her bold, visionary paintings. 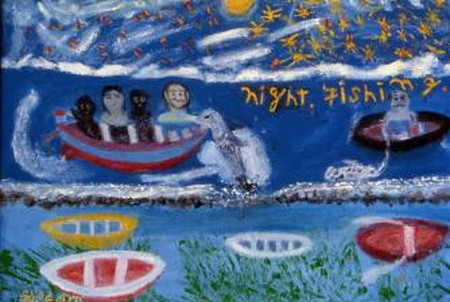 Bush, a 4th generation Caymanian, was one of the most well known folk artists on the Island. Born in 1914 in Grand Cayman, and affectionately known as Miss Lassie, she began painting relatively late in her life at the grand age of 62, after she experienced a religious vision in 1984. Her outsider art featured unconventional, fantasy landscapes that were heavily influenced by her Christian faith, and her spiritual dreams.
Painting in oils on canvas, glass and wood, her intuitive art is defined by simplistic lines, bold colours and scenes of Caymanian seafaring life, and abstract depictions of Biblical stories which she painted on the doors, windows, ceilings, shutters, fridge and walls of her house. Bush was awarded an MBE by the British Empire in 1997. She died in 2003 at the age of 89 but remains a celebrated artistic figure in her homeland.

Built by her father, her Georgetown home is only one of six locations which has been preserved and declared a place of National Historic Interest on the island. In recognition of her art, and contribution to Caymanian culture, the government purchased the wattle and daub building in 2008, after part of the building was destroyed by Hurricane Ivan. A national landmark, the house was renamed the Mind’s Eye and was officially opened to visitors in April 2011. The site is run by the Cayman National Cultural Foundation, who help maintain the restoration of the building.

The Managing Director of CNFC, Marcia Mutto believes that preserving Bush’s work is essential to create a Caymanian mythology. “Miss Lassie was at the same time extraordinary, and very representative of the community and the culture of these islands’, adding that her home will ‘serve as a cultural heritage site that will serve as a place to learn about and experience a very Caymanian way of life.’