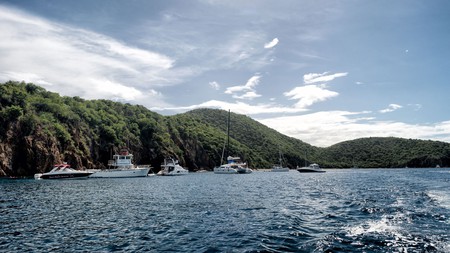 Write your own aquatic adventure with a stop at Norman Island, said to be inspiration for author Robert Louis Stevenson | © Have Camera Will Travel | Europe / Alamy

Historic shipwrecks, glass-like visibility and a kaleidoscope of coral, all in year-round tropical waters… the British Virgin Islands offer a bounty to salt-seekers, with sunken spots for seasoned scuba divers and anyone willing to throw on a wetsuit. Best of them all? Quite possibly Rhone Marine Park and Norman Island.

First up, the Rhone area – 325ha (800 acres) of fringing reef, seagrass and even a castaway island supposedly named after a pirate’s song – is much more than the shipwreck after which it is named (the RMS Rhone lays on the seabed here). It’s also the first, and only, Marine National Park in the BVI. 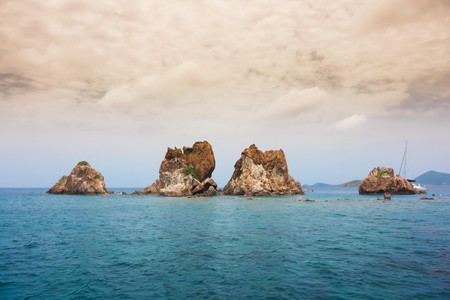 Anchoring and fishing is prohibited, and only sailors with a permit can moor here. With this level of protection, the marine life is rarely disturbed by humans, making the Rhone wreck an ideal place to observe the natural behaviour of the underwater inhabitants.

Next, Norman Island, whose large harbour – known as The Bight – offers one of the most coveted anchorages in the region. Beneath the water, scuba divers are spoilt topographically: dive sites feature ​​rocky pinnacles (The Indians), shallow underwater caves (The Caves), an outer island wall (Spyglass) and even a sea mount (Ringdove Rock). The island is also steeped in history, its shores known as centuries-old stashing points for pirate swag and for being the inspiration for Robert Louis Stevenson’s Treasure Island tale. Here’s what not to miss at both sites…

Scuba in style around the British Virgin Islands by chartering a yacht with SamBoat. Alternatively, upgrade to a multi-day sailing vacation with Dream Yacht Charter. 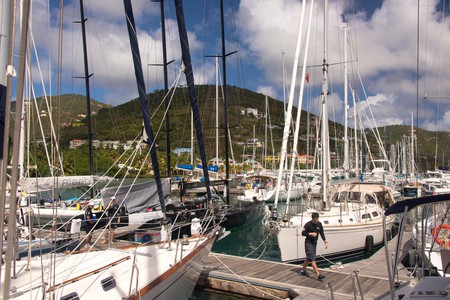 Natural Feature
Facebook
Email
Twitter
Pinterest
Copy link
Share
The wreck of RMS Rhone, off the coast of Salt Island, is not only the flagship dive site in the BVI, but considered one of the best in the world. The former Royal Mail ship is wonderfully preserved after a hurricane brought it to a grisly fate in 1867. It now rests in two sections: the stern at 7m to 21m (25ft to 70ft), catering for snorkellers and newer divers, and the bow at 24m (80ft), suiting the more experienced.

If the still-intact 150-year-old propeller, signalling cannons and other antique artefacts aren’t enough, fireworks of coral also adorn the surface of the wreck; lobsters, moray eels and octopus hide within the crevices; and large schools of barracuda and jacks patrol the surrounding waters.

Natural Feature
Facebook
Email
Twitter
Pinterest
Copy link
Share
Between Salt Island and Dead Chest Island, the two fire coral-crusted pinnacles of Blonde Rock are a magnet for marine life (and open to the elements). Gorgonian corals line a plateau around 15m (50ft) down, surrounded by rocky caverns and even a small cave full of glassfish. Expect lobsters, cobia, pufferfish and even the occasional shark here, worth saving a day to find the moorings for. 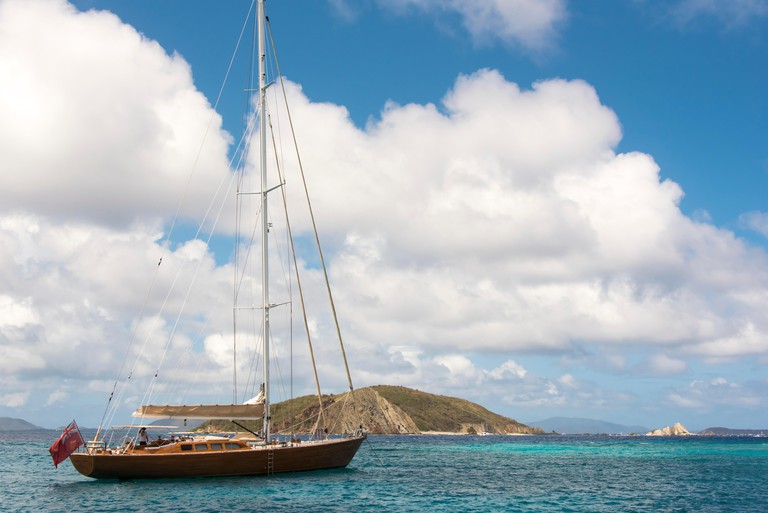 © Danita Delimont / Alamy
Next, sail on to Dead Chest Island where, at the southwest end, you’ll find this site, named after the palette of corals and sponges gilding its four striking gullies. It’s a beginner-to-intermediate dive, with consistently clear visibility, which can be affected by swell. Proximity to the open sea facilitates sightings of pelagic fish, turtles and reef sharks in relatively shallow water, while pillar corals and ridges offer a colourful home for nudibranchs and lionfish.

Natural Feature
Facebook
Email
Twitter
Pinterest
Copy link
Share
Onwards to Norman Island where, 2.5km (1.5mi) southeast of the tip, Santa Monica Rock – named after the schooner that pierced a hull on the submerged peak – offers advanced divers a uniquely rewarding challenge. Though The Indians may be the famed mounts of Norman Island snorkelling, Santa Monica Rock is said to have a “sinkhole” at 7.5m (25ft) hidden amid crevices and ridges and is one of few local dives to reach depths beyond 30m (100ft). In colder months, you may be at the mercy of currents, waves and poor visibility, but you could see nurse and reef sharks, green turtles and mackerel, all conveniently near The Bight harbour for anchoring.

Natural Feature
Facebook
Email
Twitter
Pinterest
Copy link
Share
On the north shore of Norman Island, find this beginner-friendly wall between 6m to 18m (20ft to 60ft), whose name is borrowed from the island’s hill, where pirates would search for target merchant ships. Now divers can keep watch of the blue instead, where pelagics such as tarpon, eagle rays or turtles glide past, while the sandy bottom beckons foraging stingrays. Decorated with fans and sponges, the wall shelters grouper, filefish and other critters paying a visit to the bottom-dwelling goby cleaning stations. 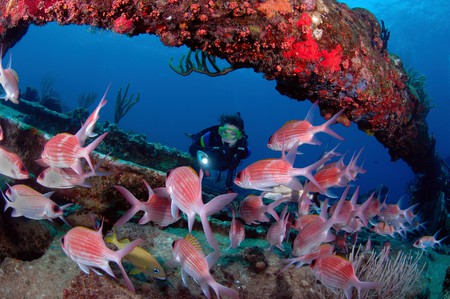 Most operators visit the RMS Rhone, while only some dive outfits visit the more southwestern sites of Norman Island.

Dive BVI have been running dive trips to the RMS Rhone since 1975 and, with more than 45 years in BVI seas, have issued over 10,000 certifications across their two sites at Yacht Harbour and Scrub Island. Their staff are cross-trained with many agencies so they are able to offer SSI, PADI and NAUI checkout dives.

Blue Water Divers are located at Nanny Cay Tortola, which makes them excellently placed to run weather-permitting trips around Norman Island. They’ve been diving since 1980, after their founder spent three years running trips off a cruise ship, and count French oceanographer Jean-Michel Cousteau as a former customer.

How to get to Rhone Marine Park and Norman Island

Several ferries operate from Tortola to the surrounding islands, though undoubtedly the best way to travel around the BVI is on your own boat.

The Peter Island ferry travels between Road Town, Tortola, to Peter Island at least five times a day. Expect to pay round-trip fares of $20 for adults and $10 for children.

From here, you can access Rhone Marine Park – which starts from Lee Bay on Salt Island and stretches west to include Dead Chest Island. Though Peter Island is the closest access point, most dive operators will visit at least the RMS Rhone from whichever island you’re staying on.

From Hannah Bay, Tortola, the Norman Island ferry runs direct to Pirate’s Bight restaurant for accessing Norman Island. Call ahead to book and get their schedules and fares.

Explore the British Virgin Islands from the water by booking a sailing vacation with Dream Yacht Charter. Alternatively, charter a yacht for the day with SamBoat. 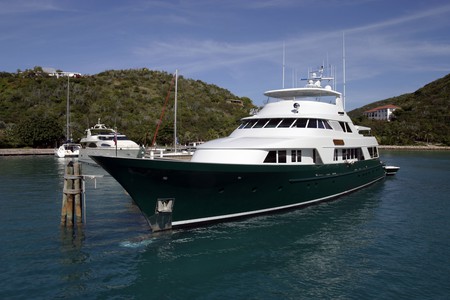