The Best Beaches in the British Virgin Islands 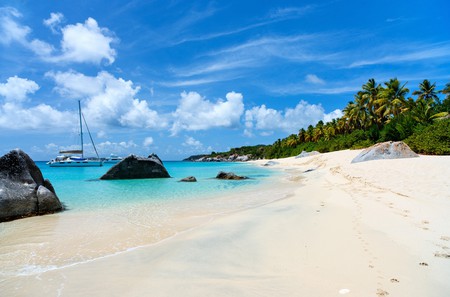 More than 50 islands and cays make up the British Virgin Islands – a white-sand paradise in the Caribbean. Go snorkelling off Tortola or stop by Jost Van Dyke for an infamous Painkiller cocktail.

The British Virgin Islands are famously a billionaire’s playground. Richard Branson owns Necker Island, which has hosted high-profile guests like Barack Obama and Mariah Carey in the past. One of the four larger islands of Tortola, Anegada, Virgin Gorda and Jost Van Dyke will likely be your starting point. The best way to explore the region is by boat, so why not charter a yacht or join one of the many sailing tours to visit the tranquil bays and pristine beaches that make up this British overseas territory? Without further ado, let’s dive into some of the best beaches in the British Virgin Islands.

Discover these beaches by renting a yacht for a day with SamBoat. Alternatively, enjoy a multi-day sailing trip with Dream Yacht Charter. 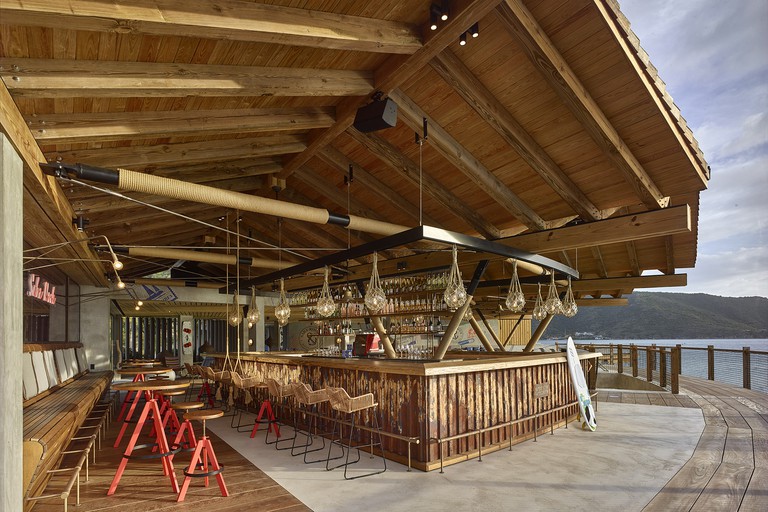 Courtesy of Saba Rock
Sidle up to the shores of Saba Rock to anchor your boat ahead of lunch. This private-island resort has pedigree that skips back through the decades thanks to Bert Kilbride, legendary diver and “Last Pirate of the Caribbean” who famously discovered the RMS Rhone shipwreck and set up the first outpost on this speck of the Caribbean. Today, it’s a barefoot luxury hotel, completely rebuilt in the aftermath of Hurricane Irma. Non-guests arriving by boat can moor up in the waters and dine at the split-level bar and restaurant for fresh seafood and Caribbean classics. On the far side of the island, there’s a sandy beach, pierced by matchstick palms. 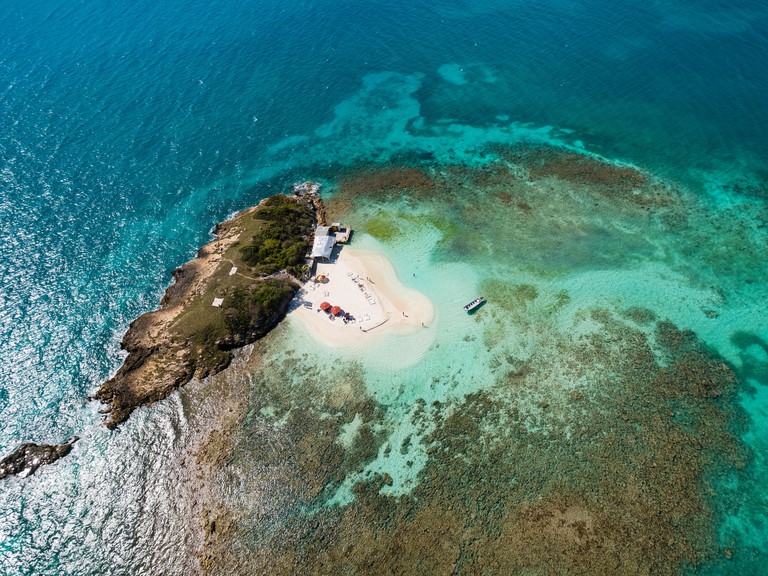 © Westend61 / Alamy Stock Photo
Despite being located on the uninhabited island of Prickly Pear, the namesake beach has its very own beach bar: SandBox. So, drop anchor and settle in for a mojito or two. If you somehow tire of the white sand and sparkling teal waters, there’s a hiking trail that leads you from Sandbox – over the cacti-covered hills to the quieter North Beach. 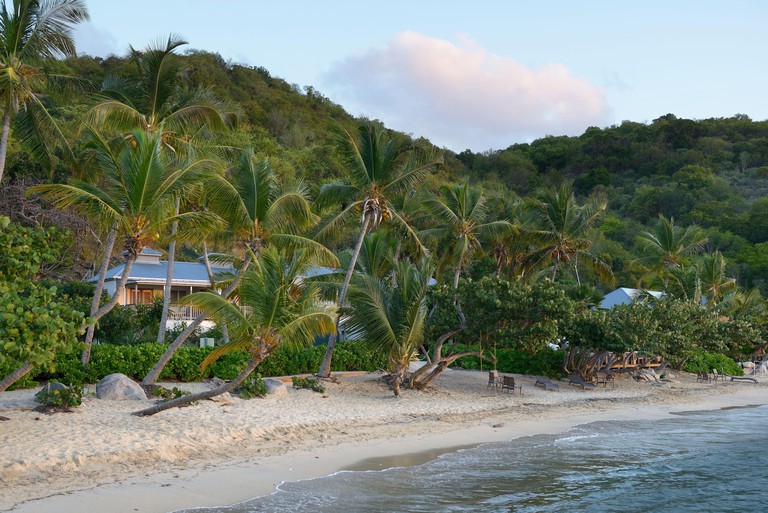 © Kevin Oke / Alamy Stock Photo
The moniker for a group of smaller British Virgin Islands, the Little Sisters is home to some of the best beaches in the area. Notably, Manchioneel Bay on Cooper Island is perfect for those looking for a beach with calm waters – while Dead Chest Island should be the first port of call if you want to dive or snorkel over pristine coral gardens. 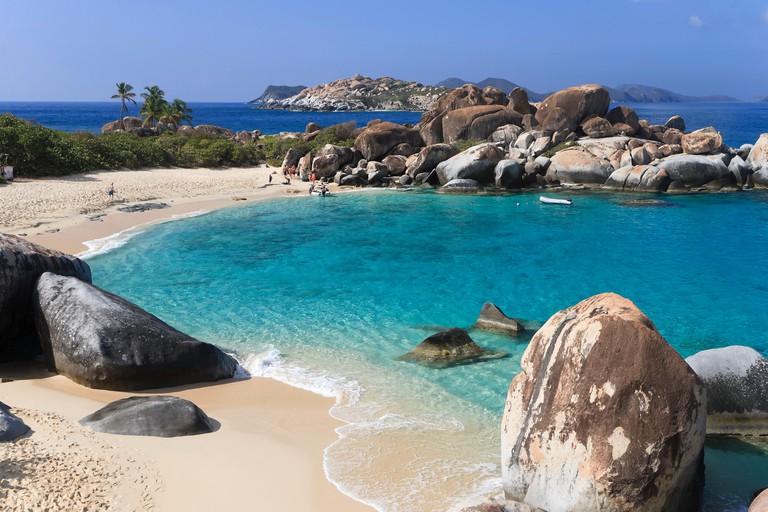 © Jon Arnold Images Ltd / Alamy Stock Photo
Consistently named as one of the best things to do in the British Virgin Islands, the Baths are a must-visit locale. Plonked on the southern tip of Virgin Gorda, the Baths consist of white sand beaches sprinkled with giant granite boulders, creating plenty of secret rock pools to bathe in – hence the name. You don’t need to charter a sailboat to reach this one as from Spanish Town, you can simply get a taxi to take you straight there.

Sitting pretty among the Little Sisters group, Pelican Island is fringed by cerulean waters and a lick of white sand. Dive off your boat and swim ashore on the uninhabited island or visit Rainbow Canyons – a colourful coral reef that sits just south of the island, filled with a variety of sea life including garden eels. There is no doubt this is primed for novice snorkelers. 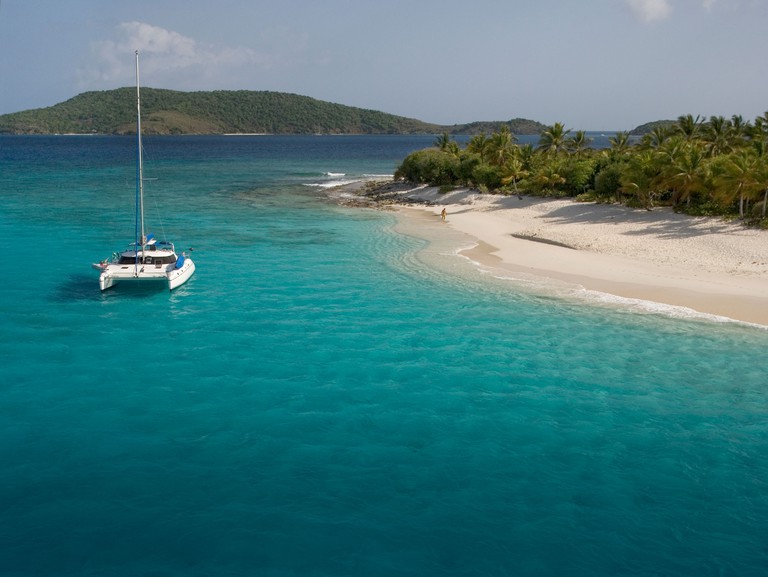 © B.A.E. Inc. / Alamy Stock Photo
As its name suggests, Sandy Cay boasts a lofty beach that encircles the majority of this tiny, uninhabited island. It’s sandwiched between Tortola and Jost Van Dyke and can easily be reached via boat. When you’re not lazing on the aforementioned beach, there’s a nature trail that will lead you around the island – keep your eyes peeled for hermit crabs and bright yellow warblers. 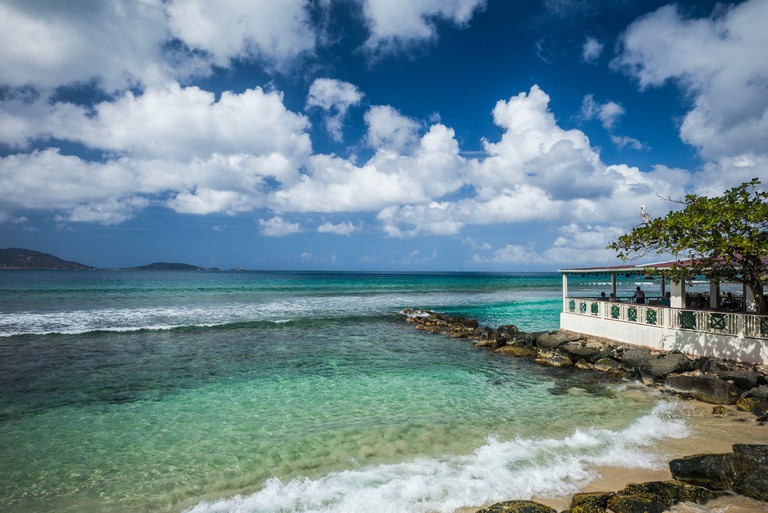 © Mauritius Images / Alamy Stock Photo
Plonked on Tortola – the largest of the British Virgin Islands – Apple Bay is a surfing haven as it’s home to some of the best waves in the Caribbean. Beyond the waves, you’ll find a collection of small eateries, boutique hotels and roadside craft stalls, but the beach is the main drawcard – it’s lined with palms and the sky turns a magical golden hue at sunset. 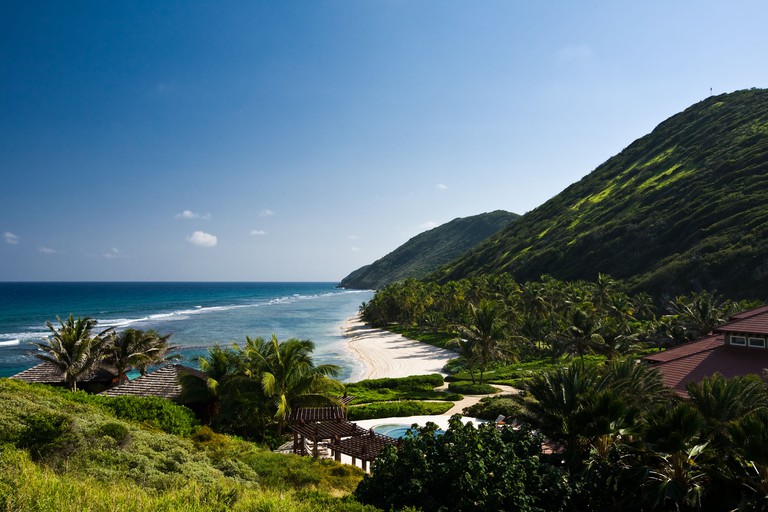 © Diego Pagani / Alamy Stock Photo
The best way to truly experience Peter Island and its many beaches is by staying on it – the ​​Peter Island Resort and Spa is the only accommodation option on the island, so make sure you book a stay here. Spend your days exploring the secluded White Bay Beach or head to the intimate Honeymoon Beach at the far end of Deadman’s Bay. 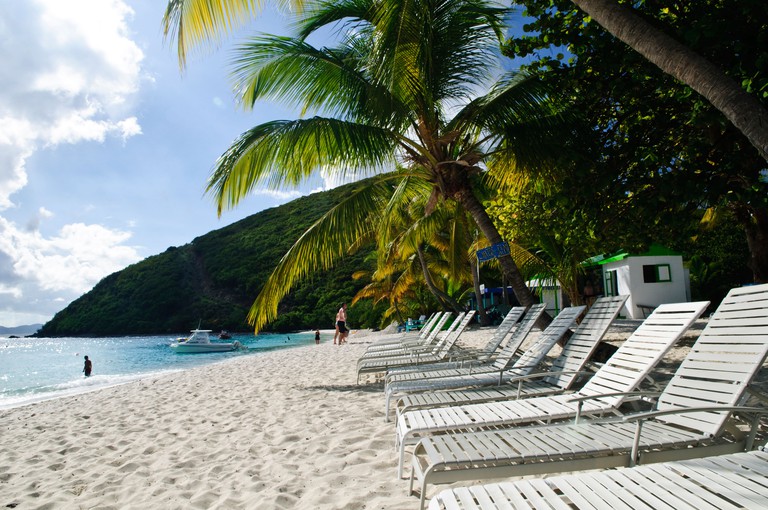 On the southern side of the island is the beach at White Bay – named after a Dutch pirate, Jost van Dyke. It’s home to a variety of bars, the most famous probably being the Soggy Dollar Bar – it gets its name from the fact that White Bay is accessible only by boat and most patrons have to swim in and will hand over soggy dollar bills. Sip on ‘Painkillers’ and lie on one of the many lounge chairs on the beach as you gaze at Tortola and the US Virgin Islands in the distance. Just beware of the mushroom ‘Bushwackers’, though. No, those aren’t shitakes they’re blending into your drink. 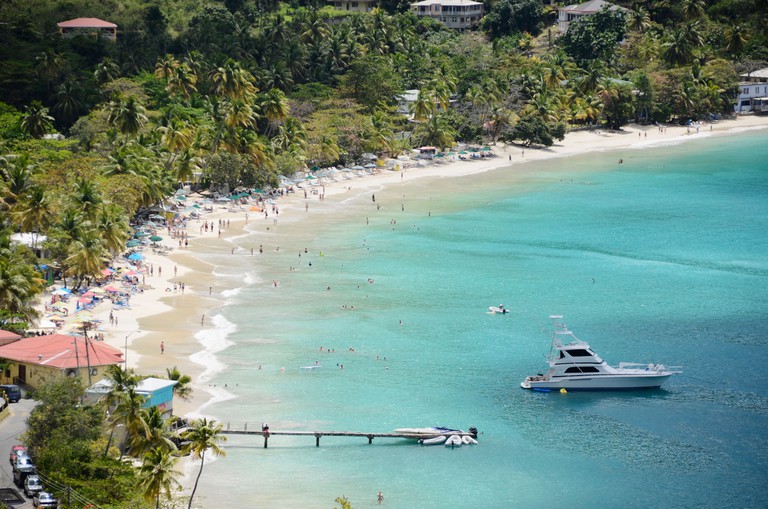 Cane is the largest beach on Tortola and it’s on the shores of the bay sharing the same name – the place is named for the sugar cane mills that used to be here. There’s still plenty of sugar products to be found here – yes, that’s rum we’re referring to. Hop on a stand-up paddleboard and traverse the smooth waters, or if there’s a swell, go catch some waves at Tortola’s famous surf break. 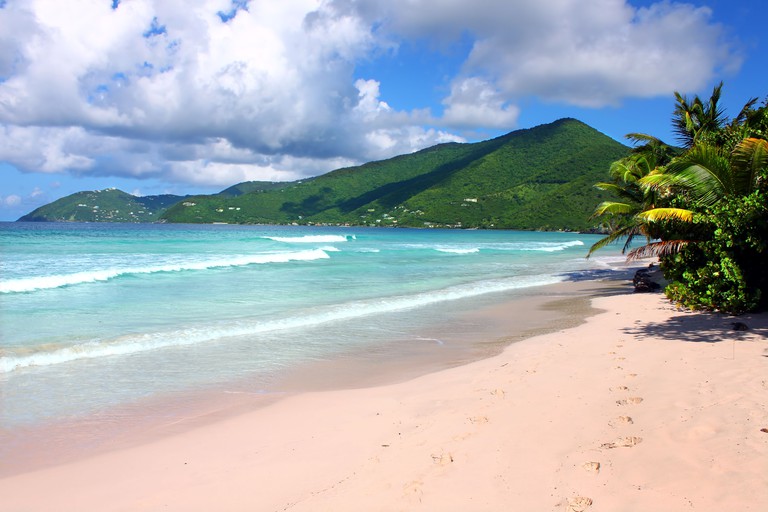 On the far-western end of Tortola – just north of Soper’s Hole – sits Smuggler’s Cove. Pirates used to hide here to resupply or wait to ambush unsuspecting victims. Come here for a beach deprived of tourists but filled with trade winds, sunshine, white sand and palm trees. The sunsets are marvellous to watch at Smuggler’s Cove as the red, tropical sun lazily dips behind the cays to the north of the picturesque Narrows.

Escape the crowds by hiring a yacht for the day through SamBoat, or booking a multi-day adventure with Dream Yacht Charter – no sailing experience necessary.