10 Delicious Caribbean Dishes You Might Never Have Thought to Eat

The Caribbean is indisputably beautiful, but can also be a weird place. Many of its customs and cultural characteristics may seem odd to outsiders. The region’s dynamic history of migration, displacement, genocides, warfare, multiple colonial influences and political struggles have made it a melting pot of varied peoples with different backgrounds and behaviours. This is reflected in the food which can be a little odd, but undeniably delicious.

Trinidadians will curry anything! This delicious habit has given rise to a surprisingly tasty mix of flavours in curried mango. The ripeness of the mango depends on personal taste but it’s usually taken at the green or almost ripened stage, chopped up and tossed into a sauce pan with garlic, chadon beni, saffron, geera, a bit of sugar, hot pepper and of course curry powder. The result is a mouth-watering melt of sweet, sour and tangy flavours that go great with just about anything.

Barbados and St. Kitts are reportedly the only two Caribbean islands to still have this West African import thriving in the wild. But only in the latter, can you find it stewed and referred to as ‘tree mutton’. In St. Kitts, the Vervet Monkey (or Green Monkey because of its hue in certain lights) reportedly outnumbers the human population 2:1. But if this dish becomes any more popular, that may not be the case for very much longer, since there is talk of putting it on the menu in local restaurants to help reverse overpopulation. Locals claim that unless you are told, this dish is virtually indistinguishable by taste, sight or smell from regular mutton. 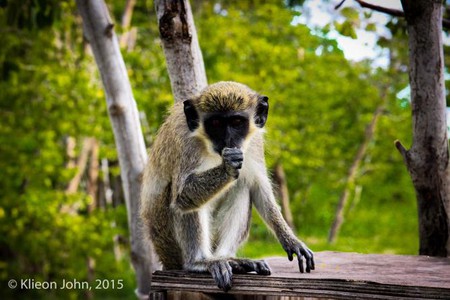 Since when do chickens croak? This is an outsider’s mistake, since in Dominica, ‘Mountain Chicken’ refers to a giant ditch frog that is fried and served with ground provisions. It got its name because of its size and the similarity in taste/texture to the common chicken. However, the chances of flying over there to sample it are slimming, since over consumption and a worldwide fungal epidemic have made it one of the world’s most endangered amphibians.

The Brits might be familiar with this adaptation. This is one of the most mouth-watering things to smell and eat, until perhaps you find out that it is made by steaming rice in coagulated pig’s blood then stuffing it into the animal’s intestine before boiling. The dish resembles sausage links and anyone from St. Kitts or Guyana will tell you this is probably one of the most delicious foods on the planet. 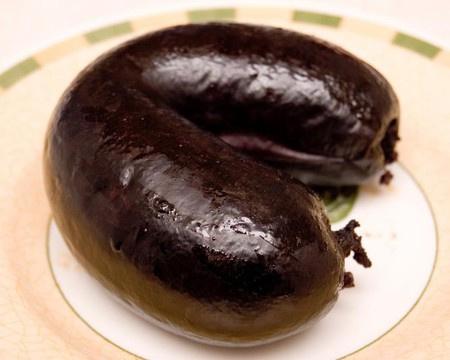 It’s easy to imagine that the discovery of this dish might have involved a large band of drunken hunters, back from a long trip, one too many bottles of white rum, a large aluminium pot over a massive wood fire and someone yelling “just chuck it all in!” Mannish water features the head of a goat, and a cup of this rich broth and can come with a variety of floating surprises such as eyes, teeth, chunks of hair and in some cases, hooves. While obviously an acquired taste, this rural delicacy is both strikingly gross and surprisingly delicious.

The sea naturally plays a big role in the Caribbean kitchen and is utilized in nearly every imaginable way. It’s not just traditional seafood that provide the ingredients. A reddish seaweed called Irish moss is liquefied in a base of coconut or some other non-dairy milk, sweetened and flavoured with vanilla, cinnamon or nutmeg. It’s apparently used by men for energy and a little extra stamina in the bedroom. 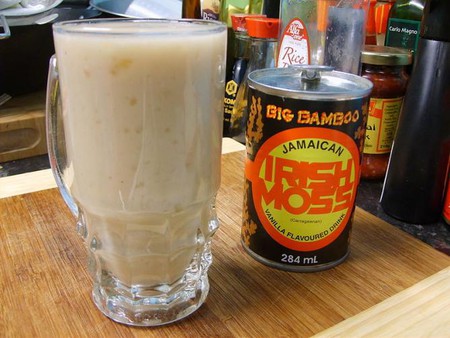 This delicacy pretty much speaks for itself, except that the people from Trinidad and Guyana who eat this jungle meat swear by its deliciousness and are well supported. An entire Facebook page is dedicated to the appreciation of this and other delicacies that can be plucked from the wild and you can find roasted iguana served at many local festivals. 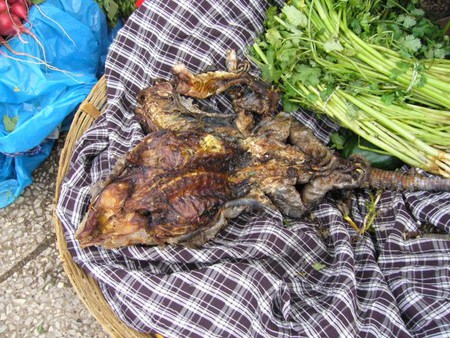 Admittedly, if you’re born and raised in the Caribbean this may not seem strange at all, since it is such a popular dish throughout most of the region. But if you stop and think about it, it’s really a giant sea snail – and a delicious one too. Perhaps one of the most versatile sea foods, conch can be roasted, stewed, deep-fried, jerked or turned into a rich, creamy chowder. To clear it up once and for all for the non-Caribbean, it is pronounced konk! 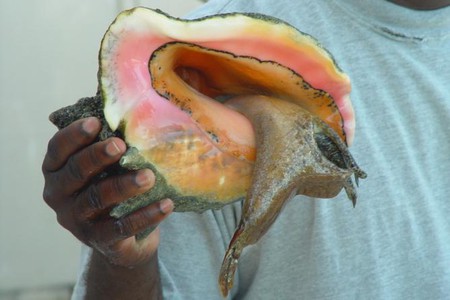 You’ve burnt the rice? No worries. If you’re in the Dominican Republic, this might earn you some praise for your cooking skills. This crunchy cuisine is called concon – or pegao if you’re in Puerto Rico – and is like cat nip for humans. Human nip? Made out of all the good ingredients cooked with the rice like the spices, coconut milk and even crab meat that tend to sink to the bottom, concon is where it all concentrates to create a crispy concoction of Caribbean flavour.

If an outsider saw one running around he’d most likely call the Acme Company to order a giant glue trap, while people in Guyana will be grabbing the biggest pot they can get their hands on. Weighing up to 13kg, this massive rodent is also referred to as paca or agouti in other parts of South America, and is roasted or stewed and served alongside a variety of side dishes like rice or ground provisions. To some, this may seem strange but we are assured by an age-old saying that, ‘If you eat labba and drink creek water you’ll always return to Guyana.’

Whether it’s plucked from the trees, caught in the sea or trapped in the jungle, the Caribbean palate is diverse and filled with delightful surprises if you have the stomach for it. Bon voyage and bon appetit!