A Beginner's Guide to Island Hopping in the Caribbean 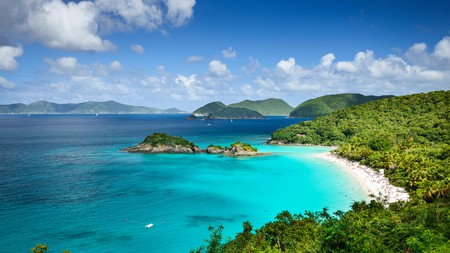 A majestic view of Trunk Bay on the island of St John, in the Virgin Islands National Park | © Sean Pavone / Alamy Stock Photo

You can easily take in a string of delicious Caribbean destinations on a single trip by mastering the art of island-hopping. Our guide to small island-hopping shows you how with must-visits and travel tips.

The close proximity of the Caribbean’s small islands makes them ideal for a hop, skip and a jump from one to the other in a daisy chain of island explorations. Fancy diving down to a shipwreck in Aruba one day and getting up close with flamingos on Guadeloupe the next? Then read on ….

Where to visit in the Caribbean

The island of St Martin (or St Maarten) is a great destination to start exploring the eastern side of the Caribbean. It’s divided roughly down the middle between the French Republic and the Kingdom of the Netherlands, and so it offers visitors a two-nation vacation. The Dutch side of the island is known as the party side for hosting the Heineken Regatta, a four-day sailing race with concerts and other festivities. Meanwhile, in true French fashion, the other side of the island features quaint, romantic restaurants, designer boutiques and nude beaches.

From St Martin, journey to the islands of Anguilla and enjoy its secluded coves, before heading to St Barts to do some celebrity spotting and Saba, which is known for its diving site at Saba Marine Park. Puerto Rico, the jewel of the Caribbean, is also a popular choice. The island is known for its cuisine – a mixture of Spanish, African, and Taino – plus its strong rum.

Elsewhere, you can get pretty much anywhere in the Caribbean from San Juan (thanks to regional carriers such as Cape Air and Seaborne), and a number of islands are even closer by ferry and plane, such as Culebra, Vieques, British Virgin Islands and the US Virgin Islands. The Dominican Republic is also only a very short flight away.

You can do all the island-hopping you want in the Guadeloupe Islands and stay within the same territory. This beautiful archipelago has five islands within easy reach by ferry and air from the main island of Grande Terre/Basseterre, each with its own character and flavor, from tiny Terre-de-Haut to beach paradise Marie Galante. From Guadeloupe, you can easily access the islands Dominica, Martinique and St Lucia below and Montserrat, St Kitts and Nevis, and Antigua and Barbuda.

The so-called ‘ABC’ islands of Aruba, Bonaire and Curacao, at the western edge of the Leeward Antilles chain, are also a popular island-hopping loop. Aruba is a popular tourist destination with several big-name beach resorts; Bonaire is best known in scuba-diving circles for its spectacular undersea life; Curacao charms with its Dutch-influenced architecture. 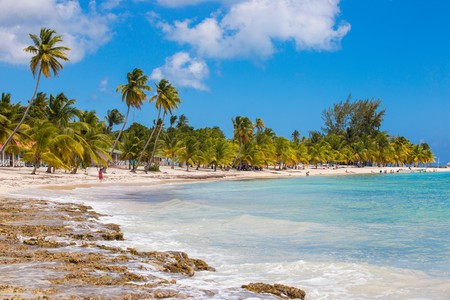 Must-visits on your multi-island trip

St Martin is famed for its white-sand beaches but there’s one that stands out from the rest. Maho Beach, which lies near the airport, is where tourists come to photograph planes passing just feet above their heads as they swoop in to land. If you prefer natural wonders, catch the ferry to Pinel Island in St Martin’s Nature Reserve, where you’ll find palm-fringed sands and shallow waters ideal for snorkeling. To learn about the island’s Dutch heritage, take a trip to Fort Amsterdam near Philipsburg. Here, you can explore the ruins of this former military base and take in sweeping hilltop views.

There’s no shortage of historic sites in Puerto Rico. Start by touring grand La Fortaleza, the governor’s official residence, which was built between 1533 and 1540 to defend the harbor. Continue to the island’s longest-serving settlement, Old San Juan, a National Historic Site filled with 16th-century fortresses, cathedrals and cobbled streets. For a change of pace, you can hike rainforest trails to crashing waterfalls in El Yunque National Forest or relax in hillside thermal hot springs in Coamo. When the sun goes down, marvel at Puerto Rico’s bioluminescent waters in Mosquito Bay, which light up when touched.

If you’re visiting Guadeloupe, don’t miss Jardin Botanique. This seven-acre haven, in the heart of the islands, showcases exotic Caribbean flora and birdlife. Think bamboo forests and pink bougainvillea, flamingos and arboretums. If you can drag yourself away from Guadeloupe’s pristine beaches, spend a day at Carbet Falls in the National Park. These three waterfalls cascade down a mountain surrounded by tropical rainforests and hiking trails. Looking for the perfect sunset? Then head to Pointe des Châteaux, a clifftop peninsula on the eastern end of Grande-Terre where you can watch waves crash onto the rocks.

Divers flock to Aruba to explore its famous Antilla Shipwreck, a German war ship blanketed in coral and tube sponges. Aruba’s other key attraction is swanky Renaissance Island where pink flamingos tip-toe through the shallows. Hop over to Bonaire for more unspoilt Caribbean sands, including 1,000 Steps Beach and Klein Bonaire, a tiny uninhabited islet set in a marine park where turtles nest. Nearby Curacao is the perfect place to get a glimpse into the Caribbean’s Dutch past in its capital Willemstad, Unesco-listed for its colorful colonial architecture. Don’t miss Curacao’s Hato Caves either, which were formed over 300,000 years ago from marine coral limestone and contain Amerindian Arawak cave drawings.

There are a few options for island-hopping in the Caribbean. The most popular is booking a cruise, but you can easily go it alone and create your own island-hopping loop by taking advantage of the numerous ferries and boat trips that go back and forth between all of the islands. Catching a flight should be your last resort. Though traveling by air to the smaller islands in the Caribbean is relatively inexpensive, it’s not environmentally friendly. This option makes sense only in cases where the islands have a significance distance between them.

It’s best to plan your island-hopping loop in either spring or at the beginning of summer, when the weather is calm. The Atlantic hurricane season starts in early June and runs until the end of November, while most of the storms hit during peak hurricane season between August and October.

Meanwhile, all major Caribbean islands have excellent mobile coverage. But for those islands with a very small population, such as Culebra and Vieques near Puerto Rico, a portable radio might come in handy. Sunscreen, mosquito repellant and bottled water should too always be in your luggage. 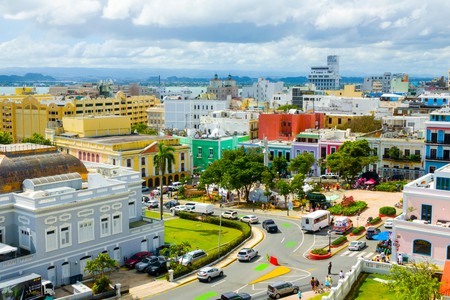