How to Spend 7 Days Island Hopping Around Antigua and Barbuda 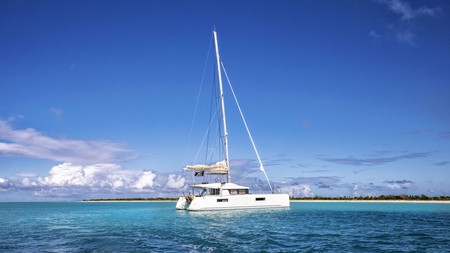 Of all the Leeward Islands, Antigua and its delightful neighbour Barbuda have rightfully earned a reputation as the jewels of the Caribbean. With their beautiful turquoise waters, plentiful marine life and a beach for each and every day of the year, it’s easy to see why cruisers, liveaboard yachties and charter boats flock to these stunning islands. Here we reveal how to spend seven days cruising around this sun-drenched region.

Sail around Antigua and Barbuda in style by hiring a boat through Dream Yacht Charter. 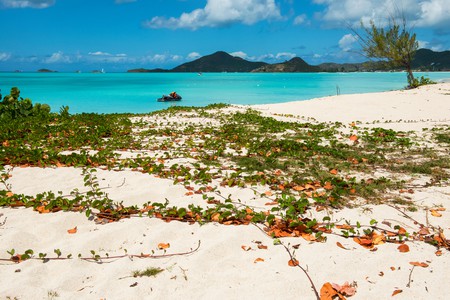 Beginning in Jolly Harbour, motor just outside of the mouth of the harbour and drop anchor in the protected Mosquito Cove. While its name isn’t the most exotic, don’t let it deter you. Here, you can safely anchor your boat in 3m (10ft) of water over a sandy ocean floor. It’s these sandy seabeds that cause the quintessential Caribbean water colour, and are a dream for sailors when anchoring their yacht. For an easy hike, dinghy to the beach near Jolly Harbour Nord, and take the trail up to Pearns Point. Once the sun hangs a little lower in the sky, take your dinghy to nearby Lignum Vitae Bay, a long stretch of sand, where you can beach your dinghy right in front of your chosen bar for sundowners. With picture-perfect views to nearby Montserrat island, and the beat of Soca music floating on the breeze, watch the moon rise over the ocean – but be sure to nominate a sober driver to safely ferry you back to the yacht. The obvious drink of choice is a rum punch, and to eat, try the conch fritters or jerk chicken. 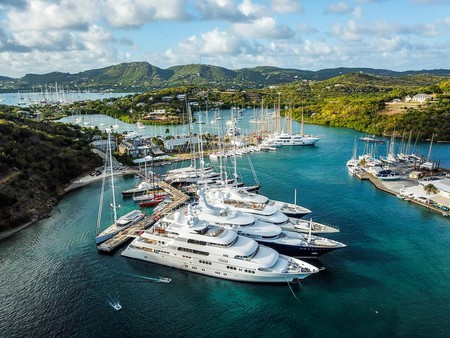 On day two of your itinerary, head 11 nautical miles south to the most popular anchorages on the island, English and Falmouth Harbours. The two anchorages are adjacent to one another, separated only by a small stretch of land. Upon arrival, head to English Harbour first, as it’s the more picturesque of the two anchorages. However, it is quite small and in peak season it can be difficult to find room to anchor. If the anchorage is full, motor around the corner to the enormous Falmouth Harbour, where a spot is almost guaranteed. English Harbour is home to a prestigious marina and the well-known Nelson’s Dockyard. Built in the 1740s by plantation slaves, today Nelson’s Dockyard is a Unesco World Heritage Site. Wander the docks among the restored 18th-century buildings, Dockyard Museum and Admiral’s house, while marvelling at the varnished woodwork of the superyachts, plus some of the finest restaurants on the island. This area is more upmarket than the rest of the island and may invoke visions of ditching the nine to five and sailing into the sunset for good. 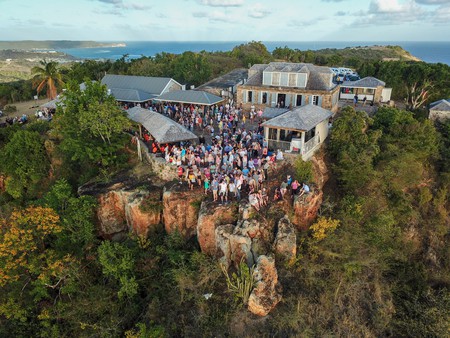 From the Dockyard, both English and Falmouth Harbours are only a short walk away. Take a stroll along the foreshore of Falmouth Harbour, where you’ll find numerous bars and restaurants. In the evening, the more adventurous might want to head up the walking trail that starts at Galleon Beach in English Harbour to Shirley Heights, a restored military lookout and gun battery. This area is also part of the Unesco World Heritage Site and is well worth a visit. If hiking to dinner isn’t your thing, take a taxi instead – but be sure to arrive before sunset. Every Sunday between 4pm and 10pm, the locals throw a huge party complete with a steel pan band, BBQ and the best – and strongest – rum punch in the Caribbean. It would be a crime to miss a party at Shirley Heights, so time your itinerary to ensure you are in the southern part of the island on a Sunday. With panoramic views over both English and Falmouth Harbours, perfect lighting and high spirits, your photos will definitely make your friends back home jealous. Keep an eye out for the elusive green flash as the sun sets over what will likely be the most memorable view and evening of your trip.

Most cruisers who sail between the Caribbean islands do so on the leeward side, as it’s more protected from the trade winds and swells that blow in across the Atlantic Ocean. With this in mind, it is suggested that you backtrack 15 nautical miles along the west side of the island, past Jolly Harbour, to an anchorage known as Deep Bay. As its name implies, this bay goes much further into the island than most, offering a protected calm anchorage with crystal clear waters. Here, there is a large sunken wreck marked by a buoy at the entrance to the bay – so be sure to avoid this area when anchoring. The vessel caught fire and sank over 100 years ago, so there has been plenty of time for the ocean to inhabit its watery cabins. Schools of fish cascade over the wreck, which is covered in barnacles, while cuttlefish and stingrays glide around its sandy decks. The wreck is a ship called the Andes and it’s one of the easiest wrecks to dive on in Antigua, as it’s located only 100m (328ft) behind your anchored yacht and is shallow enough – 3m (10ft) to 8m (26ft) below the surface – to dive with just snorkelling gear and fins. There are no shops or provisions close by, so ensure your fridge and freezers are stocked and pack a picnic when heading to the beach. Or, if you’re feeling a little more active, walk up to Fort Barrington National Park to admire the view to the open sea. 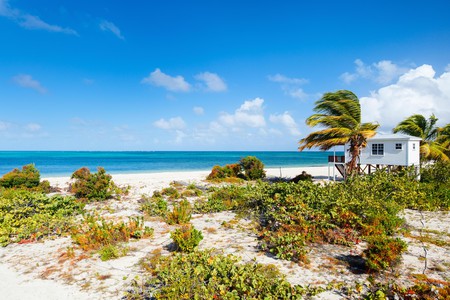 From here, Deep Bay is a good starting point to make the day sail to Barbuda. This passage is about 30 miles and should present no real difficulty. As you head north, consider trolling a fishing line with a large lure behind the boat. These waters are home to some enormous mahi mahi, barracuda and the infamous wahoo, one of the fastest fish in the sea. They are all great-tasting fish and are safe to eat, just steer away from reef fish. Of all the islands in the Caribbean, Barbuda feels like the wildest, and it serves as a real nature lover’s paradise. From the sea, you might mistake the island for a long cloud, as it is less than 18m (59ft) above sea level and often looks like a mirage when approaching. The water is shallow in some places, so yachts with a deep keel need to be cautious when sailing along the coastline. As soon as you drop anchor in the calm waters off the famous 11 Mile Beach, you’ll be under the island’s spell. There are no fancy hotels or high rise apartments here, and minimal infrastructure – this island is all about the water, wildlife and nature. Again, bring plenty of provisions and fill your tanks with water before you depart Antigua. 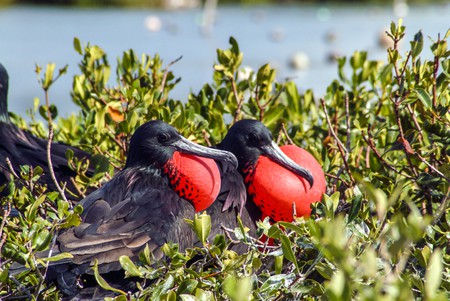 A mile-wide inland lagoon sits in the interior of the island of Barbuda – and it’s well worth booking a tour with a local guide here, who will take you in their jon boat to see an enormous frigate bird colony that is resident in the mangroves. Made up of over 20,000 birds, this colony rivals any in the world – including those in the Galápagos Islands. You will feel like you’re part of a David Attenborough documentary as you photograph and observe these magnificent creatures in their natural habitat. With their balloon-like red throats, the frigate birds are fascinating – learn about their mating rituals, hear the unusual clicking of their beaks and marvel at their 2m (7ft) wingspan as they soar overhead. On the tour, you will also learn that the giant red throat pouches that puff up in the sun belong to the males, who are doing their best to impress the females. This habitat is as untouched as they come, bar that of a partially sunken shipping container that was picked up and violently discarded in the middle of the mangroves during Hurricane Irma in 2017. Back at the beach, enjoy the serenity. You won’t be disturbed or have to fight for space on this island – in fact, you may well be the only people on the entire 1mi (1.6km) beach. The pinkish hue of the sand that the beach is famous for is actually caused by millions of pieces of crushed pink shells, and might be unlike any beach you’ve had the pleasure of lazing upon before. 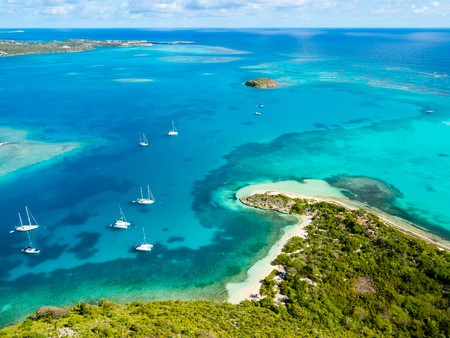 If the weather suits and you are looking for a kite surfing destination, from Barbuda you can sail back to Antigua towards the windward side of the island, where you will find Green Island. Green Island is only about 1sqkm (0.4sqmi) and is uninhabited. Anchor in Rickett Harbour and take the dinghy, snorkelling gear and some drinks to any of the deserted beaches to swim with the turtles and fish. For those who are able, there is a windsurfing school in the next bay – Green Island North East – that can have you up and boarding in no time. Alternatively, sit back and watch the incredible acrobatics as the pros fly through the air performing death-defying manoeuvres below their colourful kites.

As the trip draws to an end, it will be time to make the 20-nautical-mile journey, anti-clockwise, back to Jolly Harbour. With the wind and seas on your back, your passage should be flat and fast in the consistent trade winds. The memories made from a sailing adventure last a lifetime, and what better place to make them than Antigua and Barbuda. You might book your next trip sooner than you think.

Explore the best of Antigua and Barbuda by hiring a vessel through Dream Yacht Charter.