One of Antigua and Barbuda’s leading contemporary artists, Mark Brown’s haunting paintings pose fundamental questions on the human condition. His series Angel in Crisis juxtaposes sexuality, religion and moral issues across a number of provocative canvasses, shattering all notions of conventional Caribbean art. 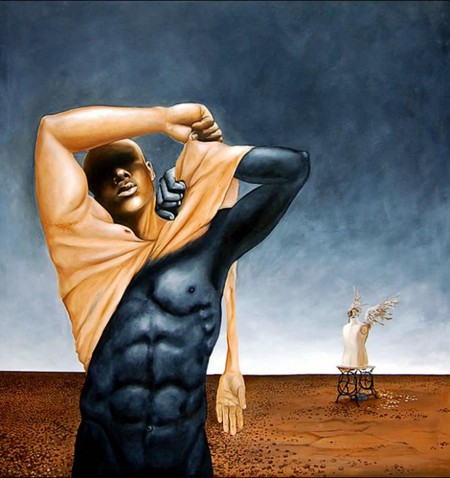 A woman rests one of her hands on her swollen stomach; the other cradles her exposed backside. Her jet-black wings engulf the entirety of her back and makes her white coif even more apparent. She’s a nun, an angel, and a pregnant woman full of shame. The piece is aptly labeled Crisis, and is one of a number of provocative images from Angel in Crisis, a series from Antiguan artist Mark Brown. In the series Brown dares to argue sexuality, religion and issues of morality, sometimes all on the same canvas. The use of angels to discuss sexuality may be an odd pairing to some, but for Brown it made perfect sense. 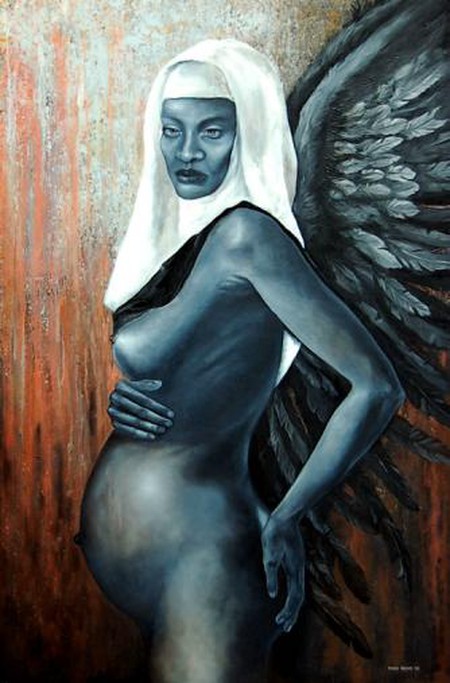 “I have always taken a very strange approach to things. I thought I really can’t paint angels helping people because that is just the conventional angel that people think of. I started to think, what would it be like to switch things around?”

Brown’s avant-garde approach makes his work standout. It is a departure from most Caribbean art: not only because of the themes that it addresses, but also in its aesthetic. The colours, though rich, are more sombre than the bright hues that Caribbean art has become known for. These pieces don’t serve to brighten a space or transport you to island life. They are meant to start serious conversations. They force the onlooker to question their own views about the topics Brown has put before them; but in a culture that is not yet comfortable with such pairings, Brown’s attempt at discourse is arguably bold.

Caribbean culture reveres anything that is religious, so it comes as no surprise that Brown has not always received favorable reviews for his pieces. However, by analyzing topics considered taboo Brown is doing what all great artists do. He forces his audience to think, to look, and to voice an opinion, whether it is outrage or admiration. He wants his audience to mull over these topics just as he has. Brown explains that like the subjects in his paintings he too is searching for answers about this life. His art is an expression of his quest for knowledge. Out of that quest Angels in Crisis was born. 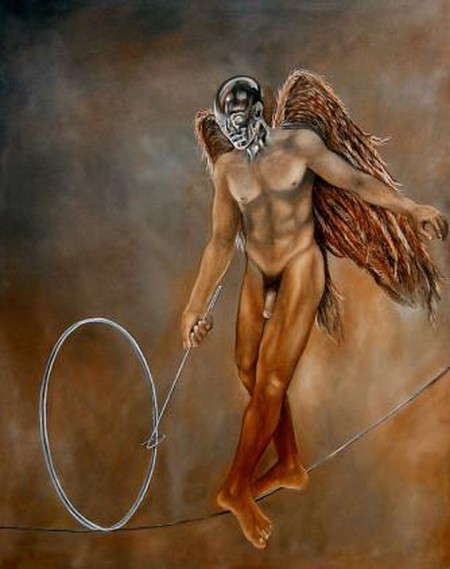 Brown says he used angels to shine a light on the plight of human beings. Admittedly a unique choice, as angels typically represent perfection that human beings could never acquire. But Brown is of the belief that angels wish they had the freedom of choice that human beings posses. He believes that freedom of choice makes celestial beings jealous enough to consider our grass here on earth as greener. So in true human fashion Brown’s angels find themselves on earth, only to succumb to its pressures.

Each painting tells a tale of disgrace. We see it in the angel’s hollow stares and their body language. We see one angel taking off his disguise, peeling off his skin to reveal something quite different under. We see another holding a pair of scissors making adjustments to his body. Brown’s angels tell us that no one is safe from the pressures of this earth. Brown has created art that is beautiful but equally haunting. 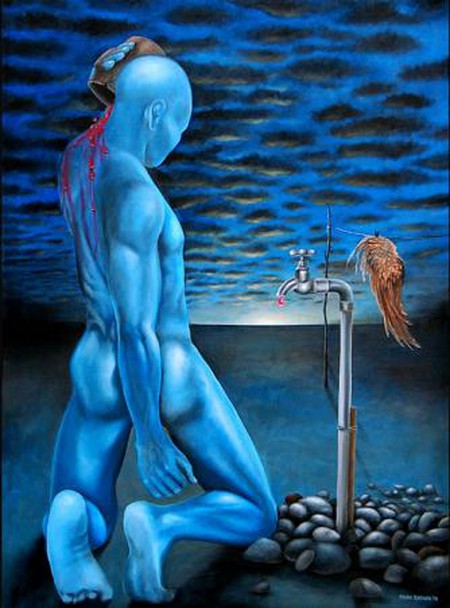 Despite the allure of Brown’s work there have been complaints and cries of disgust, especially with regard the religious references in Brown’s pieces. Some have even referred to his work as demonic. However, one unexpected positive response that Brown says he received was from a nun who viewed his work and praised him for his soul searching. Maybe those who are more conscious of the spiritual realm are the ones who are comfortable with it pervading life outside of the church. Though Brown’s artwork meddles in arguably uncomfortable territory; it challenges our mostly dogmatic religious notions as a Caribbean society. It calls for us to merge our wholesome religious theories with our everyday realities.