Born in 1953, the pioneering Anguillan reggae artist Bankie Banx has performed with artists as diverse as Bob Dylan and Jimmy Cliff, and is one of the most distinctive and celebrated musical voices in the Eastern Caribbean. 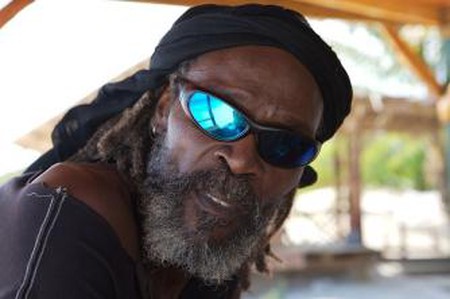 Banx and his band The Roots and the Herbs released their first self-titled album in 1977. His music incorporates elements of traditional reggae, folk, jazz, funk and rhythm and blues, and his raspy baritone voice has often been described as a cross between Bob Dylan and the godfather of reggae Bob Marley. He has since acquired the affectionate moniker of the ‘Anguillan Bob Dylan’. Banx gained further recognition when he was featured in the classic, ground breaking 1983 reggae documentary Cool Runnings, which was filmed at the Reggae Sunsplash Festival in Montego Bay, Jamaica, where Banx performed alongside other notable artists such as Gil Scott Heron.

Still residing in Anguilla, Banx has released 12 albums and is the founder of the long running annual Moonsplash Festival, which he launched in 1991. The independent music festival takes place every March, and has featured performances from celebrated artists such as Rita Marley, The Wailers and Toots and the Maytals. Banks is also a strong activist for environmental conservation and youth issues, and he has recently started Project Stingray, which is a music and arts education programme for disaffected young people.
by Erdinch Yigitce