Winner of Environmental Photographer of the Year Revealed 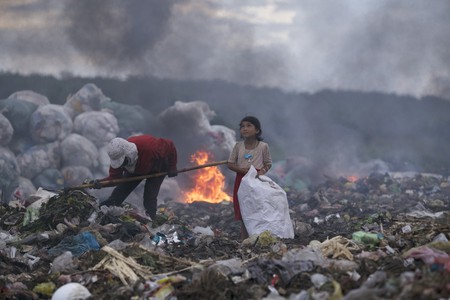 Quoc Nguyen Linh Vinh from Vietnam wins the coveted title of Environmental Photographer of the Year for his poignant photograph of a little girl collecting rubbish with her mother in the city of Kon Tum.

Since 2007, the Environmental Photographer of the Year (EPOTY) competition has showcased the very best environmental photography by professional and amateur photographers to an international audience. Set up by the Chartered Institution of Water and Environmental Management (CIWEM) to highlight environmental and social problems from around the world, the EPOTY has played a pivotal role in raising the awareness of pressing environmental issues.

This year’s overall winner is 20-year-old Quoc Nguyen Linh Vinh, who astounded the judges with his affecting and arresting image of a girl and her mother working among piles of rubbish. ‘The spirit of humanity leaps out at you loud from this image,’ said 2017 judge Ashley Cooper. ‘A young girl who should be playing safely, is instead surrounded by filth, danger and pollution, and yet there is hope in her eyes, hope for a better future, hope that one day she will escape a life of toil and drudgery. A very powerful image and a worthy winner.’

A professional photographer, Vinh makes regular visits to the suburbs, where he documents everyday life. ‘The child was happy, looking at the dark clouds and chatting to her mother. This was so touching,’ he says of his winning photograph, that undeniably reveals the hope of a child amid such devastating circumstances.
Vinh further expressed why winning was important: ‘I’ve always dreamed of winning this competition and voicing my concern about the impact of global pollution. We can’t ignore the issues, and must figure out how we can save the planet with practical solutions.’

Although for many of us the issue raised in Vinh’s image might seem like a distant occurrence because it’s not happening on our doorstep, it, like the four other winning photographs, sheds a frank light on the pertinent and pressing matters that we can no longer turn a blind eye to. 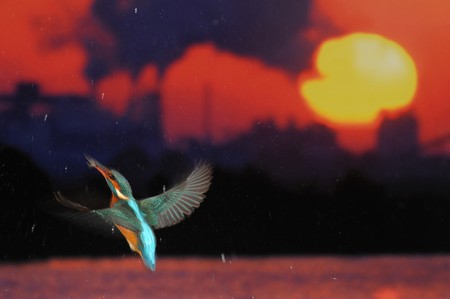 Jose Luis Rodriguez’s exceptional image of a Kingfisher captured mid-flight against a backdrop of polluting factories won the Changing Climates prize. The photographer said, ‘Winning this category is a huge honour as it allows me to showcase my work and send a public message on the importance of protecting the environment.’ 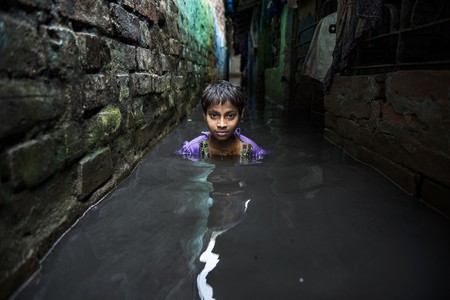 ‘I am hopeful that my photograph can help to save our planet and the people who are struggling in it every day,’ said Raju Ghosh who won the Built Environment category for his photo of a boy almost submerged in water in West Bengal. Not only does the image highlight the issue around the monsoon climate of the Indian subcontinent, but how those living in slums are at greatest risk due to the insufficient infrastructure currently in place.

Another photographer who wanted to illustrate the detrimental impact of a monsoon, was the Mobile Phone category winner, Lloyd Ericson Castro Rodriguez for his shot of a boy cycling during a flood in Pampanga. ‘I’m so grateful to CIWEM for allowing me to be both a photographer and a storyteller. This win motivates me to capture more stories, share them, and inspire the world,’ said Rodriguez. 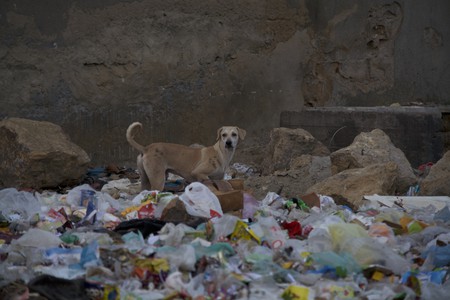 Winner of this year’s Young Environmental Photographer of the Year is Syed Umer Hasan for his image that captures the crisis of stray dogs facing Karachi. As one of the world’s fastest growing cities, man and nature aren’t coexisting with activists criticising the mass killing of stray dogs, yet people suffering from dog bites: ‘Such problems are prevalent in third world countries across the world, and neither the people nor animals deserve this. My photo shines a light on this important matter.”

Want to see more photography? See the winners of the longest running photography exhibition in the world