Why You Should Play Co Tuong When You're in Hanoi 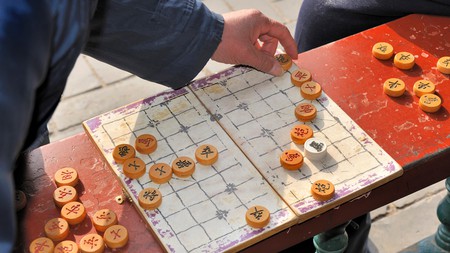 In Vietnam, the game of co tuong (more widely known as xiangqi or Chinese chess) is a national pastime. Read on to find out how the game became so popular in Vietnam, as well as how, and where, to play it.

Chess is probably the most iconic board game in the world. A contest of strategy and wits which levels the playing field for kings and commoners alike, throughout history it’s become one of our great benchmarks for intelligence and skill.

Chessmasters like Garry Kasperov, Bobby Fischer and Magnus Carlson have become international household names, and the most powerful supercomputers have been made to demonstrate their prowess by going up against them. Around the world, our folk stories and popular culture are packed with plucky chessmasters playing against demons, tyrants and even Death himself, staking their very souls on a game.

In Vietnam, the game of co tuong (more widely known as xiangqi or Chinese chess) is a national pastime, indelibly woven into the tapestry of daily life. Walk down any street – be it in Hanoi’s ancient Old Quarter, or amongst the shining glass and steel of finance district Da Nang – and you’ll find people playing co tuong.

However, if you’re from the UK, US – or any nation west of Bangkok for that matter – the game you see them playing may look a little alien. While Chinese chess has thirty two pieces on the board, pawns that advance a single square at a time, and a king on each side that must evade being checkmated, it’s still a very different game from the chess most westerners are familiar with.

A (heavily condensed) history of chess

The version we know today as Chinese chess first appeared during the Warring States Period around the 4th century BCE. It was seen as a game for kings and farmers alike, as well as an important tool for teaching military strategy. Conceived during a time of near-constant warfare, it’s easy enough to see why this highly tactical simulation of a battlefield achieved widespread popularity.

To find out where Vietnam enters our story, we need to fast-forward another three centuries. More accurately, China entered Vietnam’s story. In 111 BCE, the Han Dynasty conquered the land, ruling (virtually) unopposed for more than five hundred years. Vietnam’s culture was permanently changed. Vietnamese food, traditional dress and iconography all bear the marks of a Chinese occupation that lasted for half a millennium.

Stop on any street corner in Hanoi, and you’ll probably find yourself standing next to a chess game. From intricately engraved stone boards to simple roll-out plastic matting (with sheets of newspaper for seating) games of co tuong are played anywhere and everywhere, usually surrounded by a keen crowd of onlookers.

The most visible difference between co tuong and western chess are the pieces. Instead of three-dimensional horses and castles, Chinese chess uses circular counters inscribed with the symbol for each piece. If you don’t speak the language, this can make the game seem truly inscrutable at first.

Speaking of pieces, there isn’t a queen in co tuong – but there are cannons. Yep, cannons. They leapfrog one of their own pieces to take an enemy piece behind it.

The Western bishops are replaced by a pair of elephants, who can only move two spaces diagonally. Knights and rooks are probably the most similar to their western counterparts. Kings are mostly the same, but they have two advisors (or guards) in place of the queen that are confined with them in the palace.

Oh, and there’s a palace: a three-by-three space at the heart of the board that the king can’t leave. Also, the king can never be directly opposite the enemy’s king without a piece between them. It’s a lot to take in right away.

The other difference is the river, which divides the board in half and allows your pawns to start moving sideways once they cross it.

The best way to get the hang of all these subtle differences between these two venerable games is to give Chinese chess a go. You can find a million free apps that will let you practice against a computer, but there really is no substitute for walking up to a game on the streets of Hanoi (bringing rice wine to bribe your way in is a good bet, and may help improve your odds as long as you don’t drink it all) and asking to play.

The game of commoners, kings and Ho Chi Minhs

Co tuong has a special place in Vietnam. It’s part of the festivals, the national pride, the day-to-day life. If you’re travelling the country, it can be easy to glide along and barely scratch the surface – like a ghost clutching a disposable camera and a banh mi. Along with eating as much local food as you can, the best way to get to know the Vietnamese is through the games they play. If you can play a half-decent game of co tuong, you’re going to make friends wherever you go in this beguiling, enchanting country of chessmasters.