Why a Boat Is Best for Seeing Hoi An’s Highlights 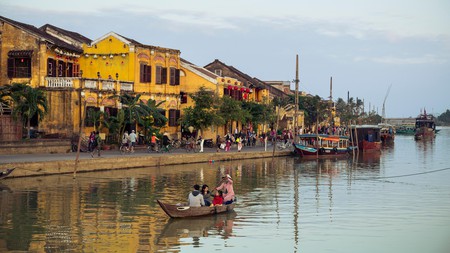 Lots of visitors explore Hoi An by scooter, bicycle or on foot, which can be an amazing experience. However, the rivers that run through and around the city offer an important window into its past. Read on to discover the best ways to experience Hoi An’s waterways.

Overlooking the lazy, sediment-rich waters of the Thu Bồn River estuary, the streets and buildings that make up Hoi An are an expression of its history, culture and, most importantly, its connection to the water. 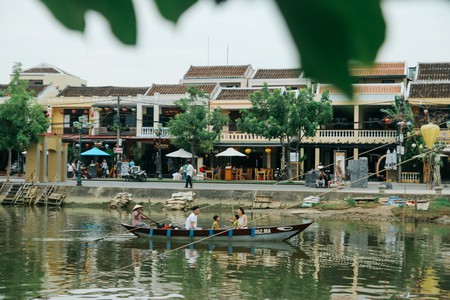 Hoi An sits nearly at the halfway point between the north and south of Vietnam. Historically the economic capital of the Cham Empire, Hoi An became one of the most valuable ports in Southeast Asia after Portuguese, Chinese, Japanese, Indian and Dutch sailors established a trading post there toward the end of the seventeenth century.

Take a stroll through the streets of its Old Town to see the influence of Portuguese traders (and later the French) on the buildings, and the famous Japanese bridge that takes pride of place across the river in the centre of the neighbourhood.

Today, Hoi An’s immaculately preserved Old Town, night market and numerous restaurants mean that tourism has replaced trade as the city’s principal industry. While there are no Chinese trading junks moored in the main street, and the only haggling being done in Portuguese is over the price of a decorative lantern, Hoi An’s waterways offer an important glimpse into the soul and history of one of Vietnam’s most beautiful cities. 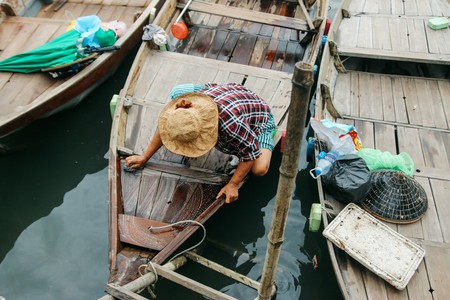 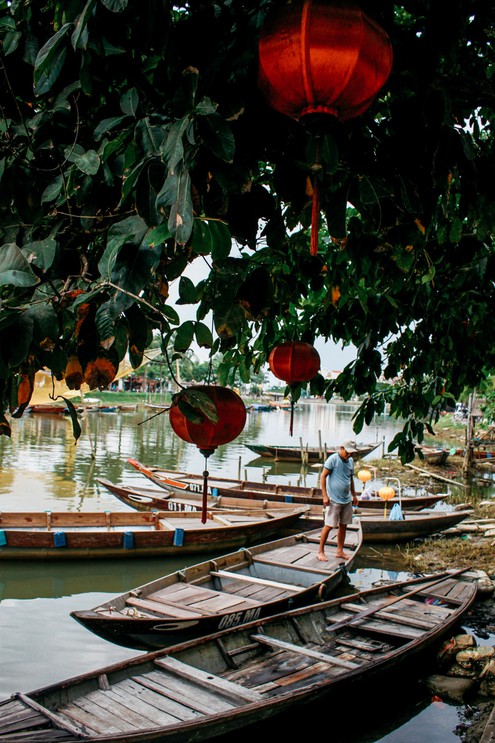 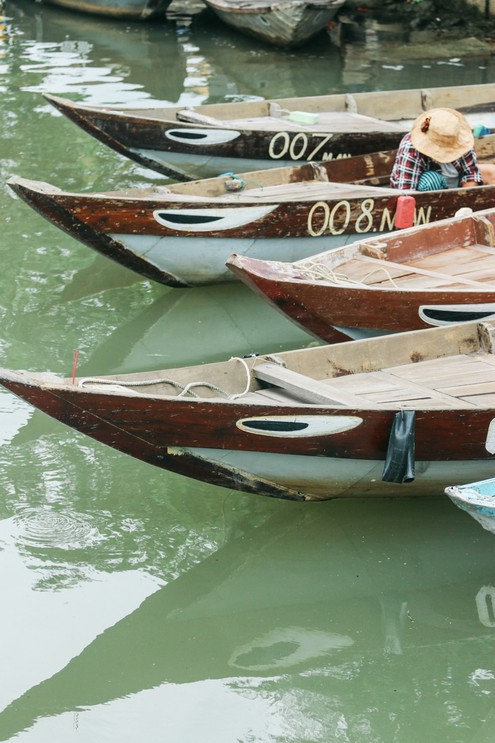 One of the best ways to get a taste (and smell) of the role that the estuary played (and still plays) in Hoi An life means getting up early with the locals. Before the Thu Bồn River was a source of trade, generations of local Vietnamese looked to it for food and a livelihood. Fishing is still a huge part of the culture in and around the estuary.

A minivan belonging to Jack Tran Tours (easily the biggest and best tour agency in the city) picks you up at your hotel when it’s still very much dark. It makes its way to the town pier and deposits you on a traditional Vietnamese wooden fishing boat.

These boats are gorgeous. The sweeping hulls and cigar box cabins are often painted bright blue or red, but when you climb onto one there’s no mistaking that they’re hardy, functional craft. 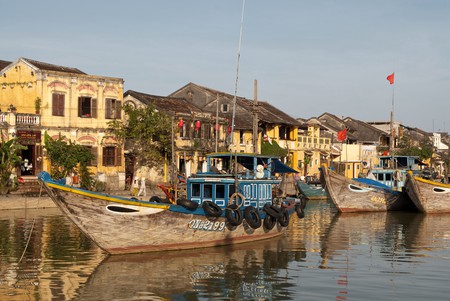 The boat makes its way downstream in the grey, pre-dawn light, parting the mist like the ferryman on the river Styx (if that haunting apparition were packing a two-stroke diesel motor).

Before long, the Thu Bồn River begins to merge with the saltwater of the Cua Dai Sea. This brackish stretch is ideally suited to a number of species and, in the ocean beyond, there’s snapper, marlin and bountiful supplies of shrimp and crab.

As the boat reaches the mouth of the river, the break of dawn brings with it a ragged flotilla of wooden boats – the Hoi An fishing fleet returning from a hard night’s work. The boat turns to join them, working its way upriver to the nearby fish market. There, you’re put to work, helping the locals prepare their catch for sale. 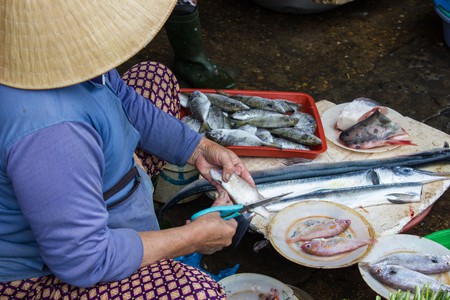 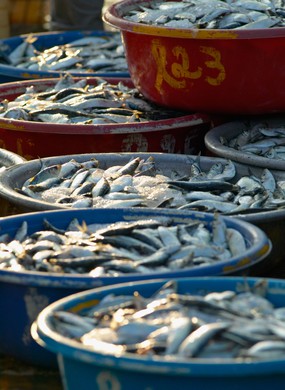 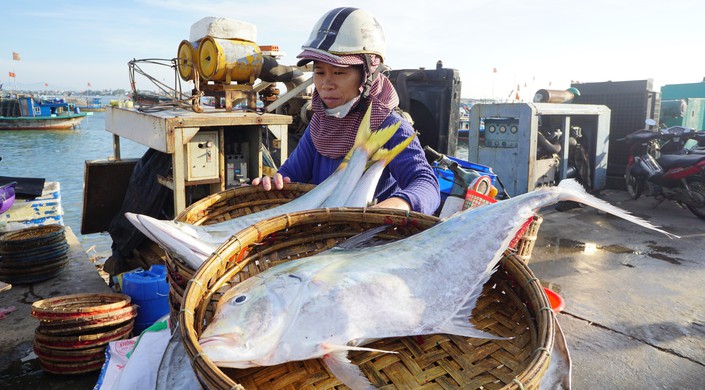 The sun has barely started to fill the morning fog with its pink and orange glow, but the fish market is abuzz with life. Fishermen unload their catches or simply sell them straight from their boats. The air is filled with the cries of merchants haggling with early-morning shoppers. It’s a scene that has remained fundamentally unchanged for centuries.

Helping a local fisherman prepare his morning catch isn’t an experience for everyone, but if you want to get a sense of a way of life that’s stayed more or less the same for hundreds of years, there’s no better way.

On the way back upriver, there’s more coffee, accompanied this time by a traditional fisherman’s breakfast. Before food, though, there’s a chance to explore Hoi An’s most iconic form of waterborne transportation.

It’s almost impossible to go anywhere on the water in Hoi An without being gently cajoled into having a go in a traditional woven boat. Very similar to European coracles, these circular bamboo craft are meant to be paddled standing up. In the hands of an experienced oarsman, they can get up to quite a speed.

Boatmen shift their weight in such a way that the little craft skips across the surface of the water without the use of an oar. It’s amazing – kind of like a skimming stone, a rodeo rider and a giant frog all rolled into one. 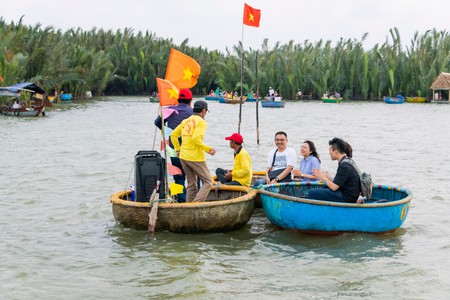 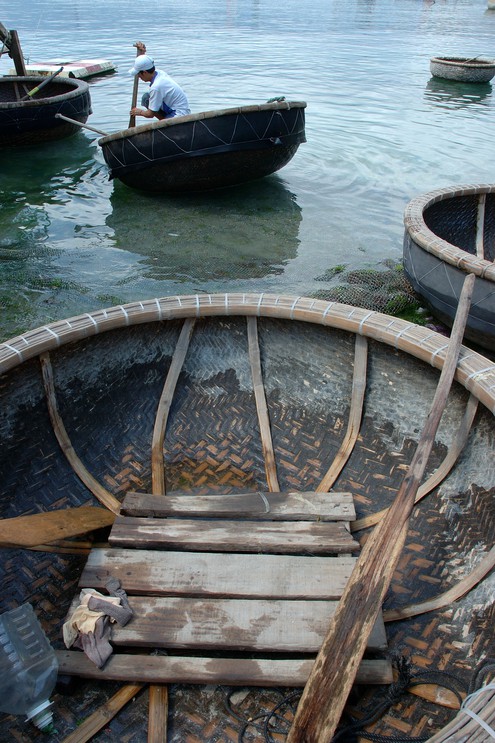 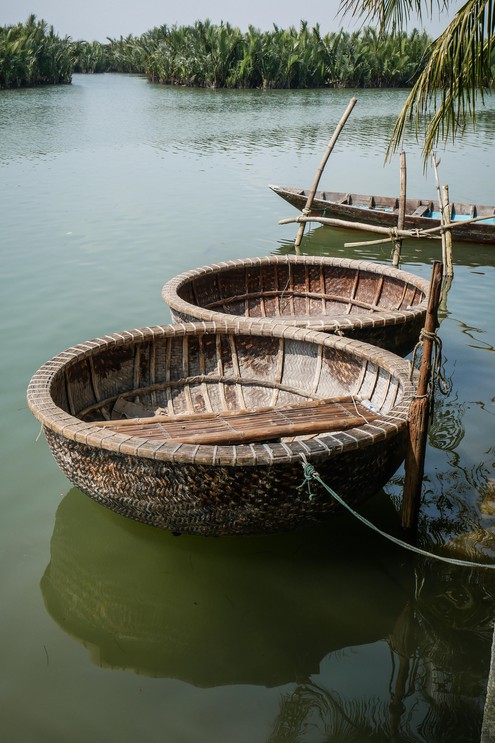 According to Colm Hutchinson, editor at Discover Nha Trang, “There is little official documentation about the origins of the basket boat. However, it is said that during the French colonial era, a variety of new taxes were introduced, one of these being a tax on owning a boat. The poor regional fisherman couldn’t pay the charge, and risked losing their livelihoods.

“As they say, ‘necessity is the mother of all invention,’ and so they came up with a plan to circumvent the tax. Creating a seaworthy vessel that would not be considered a boat was no easy task, but the ingenious fishermen successfully argued that these were not boats at all, but baskets – and therefore couldn’t be taxed. Their crafty plan actually worked, and ever since, these iconic crafts have become a mainstay in coastal Vietnam.”

There are dozens of dedicated basket boat tours, not to mention the fact that most tours of local farms, temples and restaurants will stop at some point for you to splash about in them. The experience is honestly hard to avoid. You should embrace it with open arms (and probably a life vest).

Another amazing experience offered by Jack Tran Tours is the sunset tour. Starting the late afternoon, a riverboat makes its way downriver once again. This time, the sky is completely bathed in the soft orange and red light of a Vietnamese sunset. 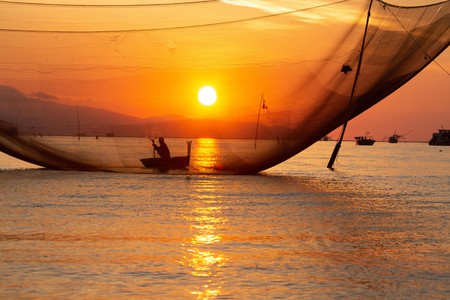 The tour shows you how the local fishermen cast their nets, even letting you have a go. Then they put you into a basket boat for what will probably be the third time that day, but with a complimentary beer, all is forgiven.

Night cruising in a sampan

At last we come to the most common boat you’ll see on the waters around Hoi An: the sampan. Long and low, with a wooden hull that has space for between two and four people comfortably (some have seen as many as eight manage it uncomfortably), sampans are used for everything in Hoi An. They’re taxis, fishing boats and, more and more commonly, tour conveyances. 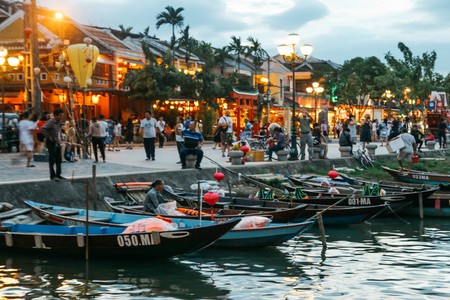 The main riverside walk in Hoi An is packed with sampans, which you can hire for about 100,000VND (£3.45) per hour. They move at a leisurely pace and, after the sun has sunk behind the horizon and Hoi An glows with the light of thousands of traditional paper lanterns, they really are the only way to experience a city that is all about its river.