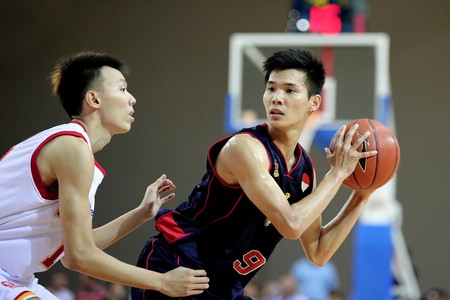 When it comes to flaming basketballs, your mind probably jumps to the NBA’s Miami Heat – but now there’s a new player on the international court: The Saigon Heat. That’s right, there’s professional basketball in Ho Chi Minh City, Vietnam, and here’s what you need to know to catch a game.

Started in 2009, the ASEAN Basketball League – or just ABL – features nine teams in nine different countries, including China, Malaysia, Taiwan, Vietnam, Singapore, Thailand, Indonesia, Hong Kong and the Philippines. The ABL regular season runs from November to March, during which teams play 20 games, and the playoffs run until the end of April.

When the Saigon Heat joined the ABL at the beginning of the league’s third season, in 2012, they became the first ever professional basketball team based in Vietnam. They were backed by the Saigon Sports Academy, which is an organization committed to developing youth in sports such as basketball, football and tennis. They’ve also started a new professional basketball league in Vietnam – the Vietnamese Basketball Association (VBA) – which will develop players to eventually play for the Saigon Heat.

While the Saigon Heat struggled during their first two seasons, they’ve since developed into a team that competes for the championship, and even made it to the semi-finals three years in a row, from 2014–2017.

Where to see a game

For the first two years, the Saigon Heat played at the Tân Bình Stadium in Ho Chi Minh City, but they’ve since moved to the Canadian International School (CIS) Arena in District 7, which can hold up to 2500 fans. The easiest way to get to the game would be to take a taxi, unless you have your own transportation. The drive will take you approximately 30 minutes from District 1. It is possible to get to games by bus, but your trip will take longer. Expect to pay $10 USD each way by taxi, so bring a couple of friends and split the fare.