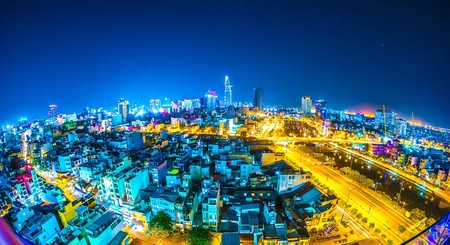 In Ho Chi Minh, whole city blocks can transform in a matter of weeks. Modern glass giants burst from the asphalt as ancient stucco relics crumble and fall. This is a city that wants the future, a city whose skyline is becoming as integral to its identity as the madness of the streets. These are the best places to take it all in.

Set between Binh Thanh and the undeveloped section of District 2, Thu Thiem Bridge is one of Saigon’s most popular spots to photograph the vibrant colors that adorn the twists, turns, curves and abrupt angles of downtown’s skyline. From the late afternoon until late into the night, the bridge is full of friends, families and couples marveling at a city in change. 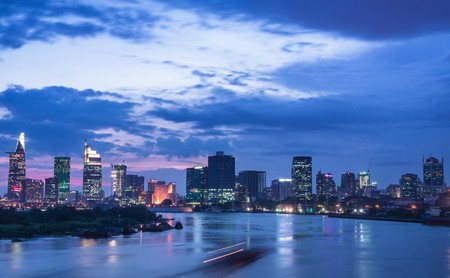 The view from the bridge | © Tran Ngoc Dung / Shutterstock

Vinhomes Central Park is a Saigon secret. Hidden behind the great wall of high rises along Nguyen Huu Canh, this just finished riverside expanse of manicured green is a spectacular place to escape the concrete and noise pollution of Vietnam’s largest city. In the evenings, as the sun dips and golden hour approaches, the views of both the downtown skyline and the sea of cranes rising in District 2 are terrific. Park in one of the many new garages in the shadow of Landmark 81 for a nominal fee and enjoy the park as if you lived here. 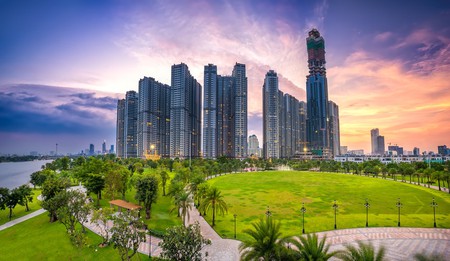 A series of seven giant billboards cling to the eastern bank of the Saigon River looking back across toward District 1. Most people only view these immense ads from downtown; however, a short motorbike ride either across the Thu Thiem Bridge or through the Saigon River Tunnel will get you 90% of the way there. From the District 2 side, reaching the billboards can be confusing as the riverside streets are constantly closing, opening, being paved or torn up due to the non-stop construction. However, after consulting Google Maps, you should eventually be able to find a street marked Cay Bang which runs in the shadows of the ads. The views toward downtown are some of the best in the city. It’s up close and personal and you’ll be the only one there. 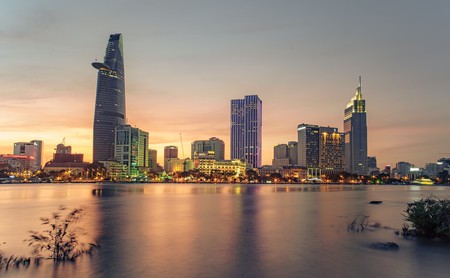 Perhaps the best way to understand the change that Saigon is going through is by having a beer smack dab in the middle of it. The Bitexco Tower was, until recently, Saigon’s tallest structure and the 52nd story Eon Heli Bar is free to visit. What makes it such a special place is the fact you have 360 degree views of the city. The skyline isn’t just growing and evolving in District 1, but in Binh Thanh, District 2, District 4, District 7 and everywhere in-between as well. Nowhere in the city provides views of it all, in the way the Bitexco does. 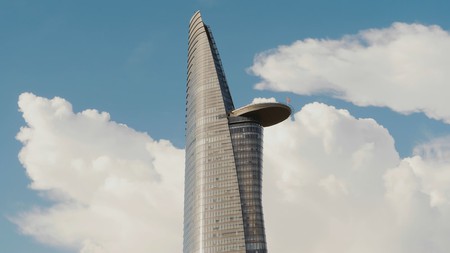 Bitexco Financial Tower in Saigon | © WorldStockStudio / Shutterstock
Give us feedback