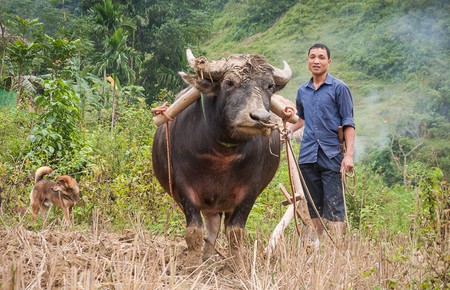 The water buffalo originated in South East Asia, and plays an important role in Vietnamese culture. Here are 11 fun facts about this majestic animal.

The water buffalo has a dull gray coat, with hair that is short and stiff. In the wild, they are about seven feet tall on average, and weigh about 2,500 pounds (1,100 kilograms). However, domesticated ones are smaller in size.

They have an upper jaw with no teeth

As with many customs, people, and animals in Vietnam, there is a folk story behind the water buffalo’s toothlessness. Apparently, once upon a time, there was a tiger that wanted to know what wisdom was and a farmer pretended to show him. Once the farmer got a hold of the tiger, he tied him to a tree and set him on fire. The tiger escaped, though, and as revenge, kicked out the farmer’s water buffalo’s teeth.

Even the way the water buffalo’s hair grows on the skin is significant to the Vietnamese. If it grows evenly, creating a symmetrical pattern on the buffalo, that means good luck and good health.

They can run at 30 miles per hour

Water buffaloes are fast when threatened with danger, and can have an average speed of 30 miles per hour. That is only a little slower than one of their major predators, the tiger.

They are crazy in love with water

Water buffaloes are herbivores and feed on grass, herbs, and other vegetation. Since they spend most of their time submerged in water (hence their namesake), aquatic plants make up most of their diet. Because of this, their presence in a particular habitat depends on water availability. Water also helps them keep cool. Although another way they regulate their body temperatures is by rolling in the mud. 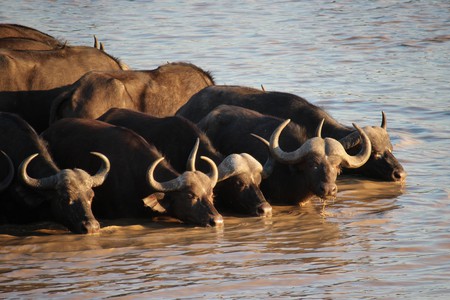 Mankind learned early that water buffaloes are gentle and tame, and as such have been domesticating them for over 5,000 years. They have not only been a source of food for people, but also a source of power – a great asset in plowing the fields and transporting people and crops. Because of this, the animals came to be known as ‘tractors of the East’. For poor farmers in Vietnam, water buffaloes are extremely valuable and respected — often treated as members of the family. A saying goes: ‘The husband ploughs, the wife sows, water buffaloes draw the rake and are friends of the children.’

Real mozzarella cheese is made from water buffalo milk. It’s so popular, that Italian pizza and pasta restaurants are popping up in Vietnam’s cities left, right and centre – all using local cheese produced from the country’s livestock. Save that factoid for the next time you chow down on an Italian pizza with your friends.

Held yearly on the ninth day of the eighth month of the lunar calendar is the controversial Do Son Water Buffalo Fighting Festival of Vietnam. It takes place in Haiphong City and is a festival with religious connotations. Preparations start months in advance and the selected buffaloes are trained rigorously. The buffaloes are selected according to certain criteria: they must be between 4 to 5 years old, have wide chests, big groins, long necks and bow-shaped horns. The tournament was halted temporarily after one of the owners was killed by a buffalo in the fighting field. After numerous calls for an end to the festival, it still continues.

Water buffaloes are an endangered species. There are less than 4,000 remaining in the wild. They can live up to nine years in the wild and 25 in captivity. Common causes of death are removal from or destruction of their natural habitat, excessive hunting (buffaloes are killed for their horns and hides), diseases and parasites transmitted by domestic livestock, and natural predators such as tigers, lions, and crocodiles.

The sounds made by water buffaloes resemble a quacking noise. Apparently so did dinosaurs, according to recent studies conducted by palaeontologists. The connection is tenuous at best, but we agree that Vietnam’s hard-working, mud-rolling quacking beast of the land is just as majestic – and should be celebrated.