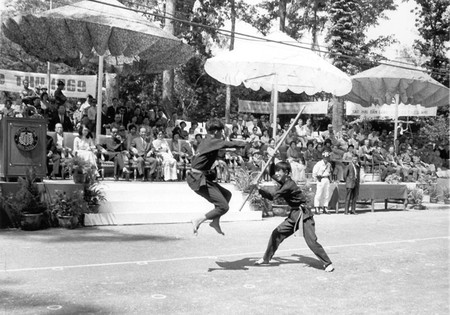 In the wake of a shocking assault on a young Vietnamese doctor in a Hanoi hospital, doctors and nurses in Saigon are receiving martial arts training to defend themselves from aggressive patients and visitors.

Not an isolated incident

On April 13th, a man brought in a young child in to Hanoi’s Saint Paul Hospital to be treated for head wounds. Security footage shows a young doctor talking to the child’s relative when the man suddenly launches himself at the doctor and punches him several times in the face. This unprovoked, disturbing attack is unfortunately just one of many that occur in Vietnam’s overcrowded hospitals.

Recent figures suggest that 60% of assaults occur in Vietnamese provincial hospitals, and that 90% of these assaults are perpetrated in the tense atmosphere of the emergency room. Emotional tension runs high when families are desperate for immediate care, but when hospitals are crammed with injured and sick patients, doctors must prioritise who to treat first.

In an op-ed for VNExpress, a Vietnamese doctor painfully remembers when a father of a young patient assaulted him in a crowded emergency room late one night in 2001. The child’s injury was not serious and the doctor explained to the father that a nurse would attend to the child. The father then punched the doctor in the face, spat on him, pushed him into a trash can and threatened him. The psychological trauma the assault inflicted on the doctor haunted him for several years. He received numerous death threats and eventually transferred to a different hospital.

Protection for nurses and doctors

This latest assault in Hanoi has heightened the need for security cameras and personnel to be permanently stationed inside Vietnamese hospitals. One hospital in Hai Phong has enlisted the help of local police to maintain calm and order inside the hospital. In Saigon, however, one particular hospital is taking matters into their own hands.

Doctors, nurses, and administrative staff in Saigon’s Cho Ray Hospital – the city’s busiest – have begun taking martial arts classes to defend themselves from aggressive patients and visitors. The Vovinam Club was founded a few years ago by cardiology nurse Nguyen Thanh Phong and is currently training about 20 medical staff.

Vovinam – short for Vo Viet Nam – was created by Nguyen Loc in the late 1930s. It is a form of martial art that stresses the importance of a strong body and mind, and is based off of the principles of hard and soft (opposing and yielding). While most martial arts prefer one over the other, Vovinam students utilize hard and soft principles equally to be able to adapt to any situation. Students train using their hands, elbows, legs and knees, as well as weapons such as knives, swords, axes and fans. Vovinam trains students to use their opponent’s force against them, maximizing effect with little force and effort of their own.

Are martial arts the key to safety in Vietnam’s hospitals?

According to VNExpress, Vietnamese doctors, nurses and other hospital staff are not recognized as public servants and therefore are not protected by laws from the dangers inherent to their professions. Furthermore, they are not allowed to turn away patients even when they are under threat or attack.

Another serious incident occurred in February at the Yen Bai Pediatric and Obstetric Hospital in northwestern Vietnam. A man climbed on the balcony outside of his wife’s hospital room to film the birth of their child. The surgery team noticed and reprimanded the man, who became enraged and later assaulted the surgeon and anesthesiologist, both of whom suffered concussions and other injuries and had to be admitted to the hospital. In 2011, a doctor was stabbed to death in Vietnam’s northern Thai Binh province by a deceased patient’s brother.

Until the serious overcrowding of Vietnamese hospitals is addressed and security measures are initiated to maintain order amid the large influx of desperate patients in Vietnam’s hospitals every day, self-defense training may be hospital staff’s best chance at protecting themselves from violent encounters.