In the Cloud: Try a Virtual Tour of Hanoi 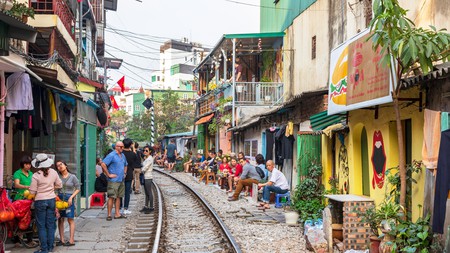 Travel seems like a distant dream to so many at the moment, with plans being disrupted and holidays cut short or cancelled. If you’re stuck inside right now, there’s still a chance to plan a future trip or revisit some old haunts. So get comfy, and let Harry Menear guide you through the best virtual tours of Vietnam’s bustling, vibrant, irrepressibly noisy capital city, Hanoi.

It can be hard to get a real sense of a foreign culture or city from the confines of a computer screen, but there are a whole lot of fantastic resources out there, from virtual-reality experiences to POV walking tours. A virtual trip to Hanoi could satisfy your wanderlust and give you a taste of what to expect when you do make the trip to Vietnam’s capital.

Take a walk through the Old Quarter

If you’re staying in Hanoi, chances are you’ll be somewhere in the Old Quarter. This charmingly jumbled cat’s cradle of streets and alleyways, lined with restaurants, beer stalls and curio shops, is the heart and soul of the city. The neighbourhood is over 1,000 years old and the historical, cultural and commercial centre of Hanoi.

The Old Quarter is made up of 36 streets, joined together by a spider’s web of winding alleys and culs-de-sac. Wandering through it first thing in the morning will take you past markets, cafés and street-food stalls selling everything from bánh mìs to vermicelli noodles and grilled pork patties. It’s a sensory barrage, and it’s very, very hard not to fall hopelessly in love.

This video is the best way to get a taste of the sights and sounds of the Old Quarter without setting foot there yourself. Meander through the winding streets, dodging the ever-present traffic, and drink in the spectacle of Hanoi’s residents going about their days – all in glorious 4K HD.

Near the southern edge of the Old Quarter, through a narrow stone archway, you’ll find one of the most fascinating slices of life in all of Hanoi. At first glance, the narrow street, cloaked in vegetation and criss-crossed with washing lines, seems just like any other.

Look down, however, at the steel tracks running down the middle of the street, and you’ll realise what makes this stretch of the city unique. At 3.30pm and 7.30pm, without any alarm or other warning signal, a diesel locomotive chugs through the heart of the street. People, chairs, tables and other accoutrements of daily life here are unceremoniously shuffled to safety, and life goes on as usual. It’s a truly fascinating testament to community resilience.

Made by the same folks who produced the HD tour of the Old Quarter, this video takes you on a stroll along Train Street. Take in the families and vendors going about their daily business, sitting, sipping coffees and eating a late lunch. About one minute in, watch the train scrape its way along the street, shaking the houses and filling the air with its low rumble. It’s a sight to see.

Known for its scenic views, water puppetry and the occasional turtle, Hoàn Kiếm Lake (Lake of the Restored Sword) is the centre point of old Hanoi. Surrounded by crowded streets and elegant French colonial architecture, the stretch of jade green water is a moment of calm at the heart of the frantic city centre.

Take a walk around the lake, past old Vietnamese men playing Chinese chess in the shade of the lush park that borders the water. The tour also explores the famous pagodas that jut out onto the water, striking a powerful contrast with the glass-and-steel high-rises that make up the skyline.

If you’re a bit of a history nerd, nothing beats exploring a country’s past. From invasions to mighty empires and occupations, Vietnam’s history is as rich and diverse as anywhere. Getting a sense of the foreign cultures who have made their mark on the country over the millennia is a great way to understand why Vietnam looks, sounds and tastes the way it does today.

In a first for the country, the folks at VR3D Vietnam have comprehensively scanned and uploaded some of the country’s most treasured historical relics to a 3D museum exhibit available for free online. Explore the sculptures of past emperors, gods and (pretty demonic-looking) snakes. It’s fascinating.

Race around the Formula One Hanoi Street Circuit

The first-ever Vietnamese Grand Prix – once a pipe dream of F1 CEO Bernie Ecclestone – was scheduled to take place in 2020. An exciting new street circuit was laid out, twisting and turning through the streets of Hanoi. The race itself was due to take place on 5 April but has unfortunately been postponed due to the Covid-19 pandemic. However, as race events around the world have been cancelled, organisers are taking things virtual.

You can still get a taste of the white-knuckle, high-speed course that winds through the streets of Hanoi with this VR 3D re-creation that puts you behind the wheel of one of the virtual race cars. The 5.5km (3.4mi) course, located in the industrial, western side of Hanoi, features blistering straits and tight turns inspired by the famous German Nürburgring and an elegant pit-stop building that echoes the architecture of traditional Vietnamese temples.

Dive into the wonderful world of Hanoi at night

When the sun goes down, Hanoi comes alive with an entirely different energy. All across the Old Quarter, restaurants and bars are thronged with hungry people in search of a good time.

Bia Hoi Junction, the famous intersection of Ta Hien and Luong Ngoc Quyen streets, fills up with revellers, crowding in together on plastic stools to drink ice-cold steins of beer. The atmosphere’s electric, bursting with music and the chatter of thousands of people. During festivals, this all gets amped up to 11, as the asphalt becomes invisible beneath the press of bodies. It’s hectic and wild – a fantastic celebration of life.