The Social Enterprises Making a Difference in Hoi An, Vietnam 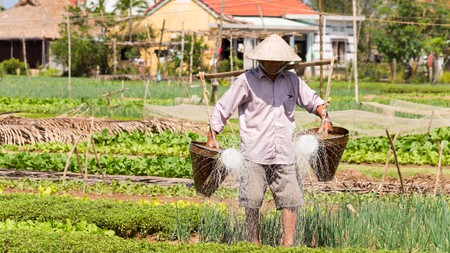 Hoi An is gaining a reputation as a go-to destination for tourists in Vietnam. This increased popularity has its own impact on the local area, but Hoi An has a number of social enterprises allowing tourists to give back to the city during their stay. Read on to discover not what Hoi An can do for you, but what you can do for Hoi An.

It’s no surprise that atmospheric Hoi An is one of Vietnam’s prized treasures. The city attracts throngs of tourists all year round thanks to its enchanting riverside location aglow with lanterns and brightly-coloured buildings, not to mention its proximity to some fine beaches reached via verdant rice paddies.

Such mass tourism usually comes at a cost, but Hoi An is on the ball when it comes to sustainability. The city has a burgeoning social enterprise scene, providing job opportunities to disadvantaged groups, enabling tourists to boost locals’ quality of life, while perpetuating traditions and reducing their environmental impact. Through these innovative initiatives, tourists can really give back to the community, from the simplest acts of eating and shopping to more hands-on cookery classes and cat cuddling.

The proceeds of STREETS Restaurant Café are channelled into an 18-month culinary and hospitality training programme, which is free of charge for underprivileged local youth, meaning travellers can tuck into delicious Vietnamese cuisine while contributing to a worthy cause.

This training opens up many exciting career paths to the young people, many of whom are orphans. Điều Hành, for example, grew up in an orphanage after his father died in a flood and his mother could no longer take care of him. As soon as he graduated from STREETS, he was snapped up by the luxurious Anantara Hoi An Resort as commis chef, using his culinary expertise and English skills to teach cooking classes to guests. He’s been working in five-star establishments ever since.

Tourists can participate in a noodle-making workshop called Oodles of Noodles, led by the students.

Grace Nguyen is championing the Hoi An vegan scene. She was drawn to veganism after feeling traumatised watching a fish take its last breath in a Chinese market. Unable to find a suitable outlet serving vegan food in Hoi An, she started cooking delicious vegan meals for her family, and opened Karma Waters vegan restaurant in 2005.

“I opened Karma Waters restaurant to spread veganism, to help animals and to make healthy food available. I also provide vegan meals to local needy people, such as lottery ticket sellers or hospital patients who are not getting enough healthy food,” she says.

A staunch vegan activist, Grace started distributing healthy meals to the poverty-stricken, and joined forces with her sister to create the Karma Waters Charitable Association

“We then started raising funds to provide medical bill assistance to poor families, as well as clothing and toy delivery to ethnic minority families,” she says.

Grace is now working alongside a Buddhist priest to raise the funds to open a temple centre, where cancer patients will receive free treatment based on traditional Vietnamese herbal medicine.

In a serene riverside setting, U Café is the brainchild of Japanese humanitarian Reiko Usada and is built upon the principles of sustainable development. It defines itself as an eco-social project, and its architectural design minimises environmental impact.

All produce is locally sourced, with vegetables coming from farmers at the nearby Tra Que vegetable garden, a 300-year-old organic farm, and coffee from a farmer in Đăk Lăk in the central highlands. The café plays host to vocational and language training for disadvantaged local people.

Gifts that give twice

“Gifts that give twice” is the motto of social enterprise Reaching Out, an art and crafts outlet which set out in 2000 with the mission of providing skills and employment to people with disabilities to craft exquisite, high-quality jewellery, ceramics and homewares. Mr Binh Le, who runs this enterprise alongside his wife, Ms Quyen, has been a paraplegic since the age of 15. This inspired him to improve the prospects of the many marginalised, poorly educated people with disabilities in his area.

“People with disabilities in Vietnam often don’t have many opportunities. Seventy percent of these people live in poor rural areas and it is very difficult for them to access public services. Education is not accessible to many of them. For example, deaf people in Vietnam are those who receive the lowest level of education, compared with other physical disabilities,” he says.

As people with disabilities do not have access to many employment opportunities, Mr Binh witnesses the highest level of job satisfaction. “When customers buy something, they interact with the artisan who made it. This is a very special feeling for the artisan, because it makes them feel useful. We feel happy when we are useful,” he says.

Reaching Out also has a tranquil tea house, offering an array of teas and sweet treats served by staff with hearing impairments. All proceeds go towards supporting people living with disabilities in Vietnam.

Not forgetting our furry friends

Jack’s Cat Café is the accidental success story of UK-born Emma Bolton and her Vietnamese husband Phong Nguyen. Emma took in tiny Jack the kitten when he turned up on her doorstep in 2012 and, amazingly, by the end of the year she had rescued 15 more cats.

The couple learned all there was to know about cat health and welfare, and soon opened up their home as a haven for cats, doubling up as a cat shelter and, later, a vegan café. They welcome volunteers from 10am to 4pm to help out in the café and shelter. The café is only open from Tuesday to Saturday, 11am to 3pm, which keeps the kitties stress-free.

Emma describes her daily life as equal parts rewarding and heart-breaking. “We have a lot of sad cases and see cruelty daily. But watching the cats grow and thrive makes up for the heartache, also, the amazing people and volunteers that give their time for me and the cats. Without them it would not be possible, and we have made the biggest family for life with all the amazing people who have helped us.”