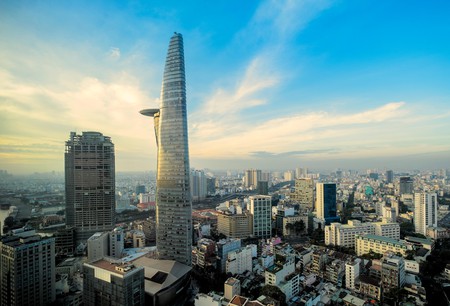 Saigon One (seen here behind The Bitexco Tower) in Ho Chi Minh City, Vietnam, has been standing incomplete since construction began in the mid-2000s | © John Michaels / Alamy Stock Photo

A skeletal reminder of an incomplete investment, or an interesting quirk on the skyline? Hannah Stephenson takes a look at what Ho Chi Minh locals think of Saigon One, their unfinished Ghost Tower.

The Ghost Tower haunts Saigon’s glittering skyline, lurking eerily behind the gleaming Bitexco skyscraper. Those not in the know might assume the incomplete building is simply under construction, but the truth is that the project was abandoned years ago and has remained untouched ever since.

Standing smack dab in the beating heart of Saigon, the Ghost Tower stands abandoned in stark contrast to the manic energy around it. The building was originally designed to be the Saigon One, a 42-storey wonder consisting of upscale offices, apartments and shops, but fate and financial trouble got in the way. The tower has stood incomplete for years – an almost criminal waste of Ton Duc Thang street’s prime real estate. How did things go so wrong?

In the mid to late 2000s, Saigon’s real estate market was booming. Property development loans were readily available and new projects were being approved left, right and centre. One such project was the Saigon One, which was due to be the third-tallest building in the city. The project was initially designed as a set of twin towers but the second tower was phased out, which was a wise decision, in hindsight.

The ill-fated tower was slated to open in 2009, but this deadline proved overly optimistic, and was pushed back by two years. In 2011, it was 80 percent complete when disaster struck. 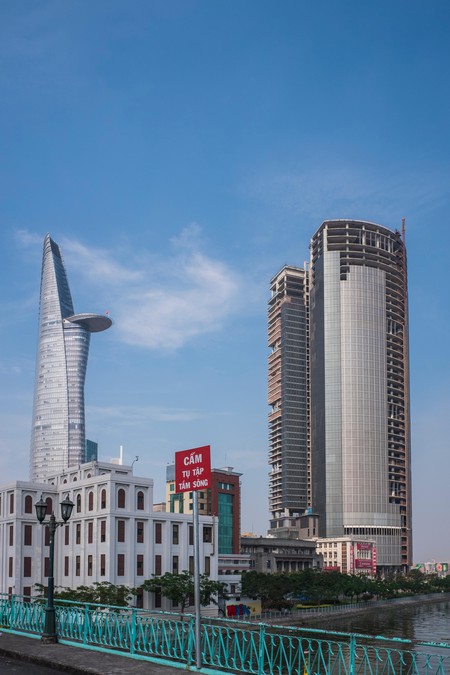 The bones of the half-finished Saigon One, behind the gleaming Bitexco building. | © BRIAN ANTHONY / Alamy Stock Photo

After five years of prosperity, the property bubble in Vietnam burst in 2011 and the real estate market all but collapsed. As a result of the crisis, the government tightened borrowing restrictions and loans became expensive and hard to secure. Many half-finished structures were abandoned and dubbed “skeletons” or “death projects”, but Saigon One is by far the most famous, thanks to its prominent position in Ho Chi Minh City’s skyline.

The tower’s main investors, Saigon M&C, found themselves in a lot of trouble. Their debts were huge and they used the tower as leverage to borrow over 7 trillion VND (£240 million). When the company was unable to repay their loans, work on the tower was put on hold due to a lack of funding.

For the next four years, the project went untouched. The investors still hadn’t paid off their loans and few developers were willing to consider such a risky project. In August 2015, the People’s Committee decided that enough was enough and ordered construction work to begin again, warning that the tower must be complete by the end of the year. However, the project’s completion was estimated to require around $45 million (£36 million) without even taking its enormous debts into consideration. Perhaps unsurprisingly, their command was met with crickets.

Two years later, in June 2017, there was finally some good news surrounding Saigon One. Ten years after the tower broke ground, it was announced that work would resume and the skeleton would, at long last, be fleshed out. A new developer, Alpha King Real Estate Development, would assume control of the project and had plans to open it to the public in 2018.

It proved too good to be true. After years of pressuring the project’s investors to pay their debts, the state bank recognised that they were fighting a lost cause. The Vietnam Asset Management Company (VAMC) swiftly seized the tower before the project could accumulate any more debt.

In 2018, VAMC put the Ghost Tower up for auction. The starting price was set at $307 million (£247 million), which proved an unrealistic amount for the seemingly jinxed tower. Within just four days, the asking amount was lowered to $268 million (£216 million). Although some investors expressed interest, the new price wasn’t low enough to convince them to take on the project and its seemingly never-ending bad luck.

And so Saigon One remains unfinished, yet tantalisingly close to completion: the glass facade and the interior are all that remain to be done. It certainly has potential. Local resident Khanh Quynh believes that “an entertainment complex or apartment building would be a great use of [the building because] the riverside view is great for sightseeing and relaxing. But it probably couldn’t compete with other skyscrapers in Saigon centre”. She also doesn’t believe that this is likely to become reality. “It was left undone for such a long time and no investor would probably invest in it.”

Teacher Tieu Hoang agrees. “I actually like the design of the building. This tower could be another famous symbol of this city. I think the Saigon One Tower could be used as a financial building, just like Bitexco, but it’s located next to the Saigon River, so I hope they will have apartments as well.” Like Quynh, however, he agrees that its completion is probably a long way off. “I don’t think it’s going to be finished in the near future.”

For now, the Ghost Tower is little more than an eyesore in the view of many Saigon residents. Thuong Possi, who works in the nearby Bitexco, says that “the unfinished… tower is threatening the safety of residents around it and also obstructs the view of the city to the south.” Instead of holding out for the project to be finished, Possi believes “it should be removed or sold to be rebuilt”.

It’s not all doom and gloom for Saigon One, though. Quynh concedes that although “the tower is kinda annoying… it looks quite cool in photos if it’s taken from the other side of the Saigon River.” Indeed, the tower’s shroud of darkness does make it rather eye-catching when captured next to its brightly-lit neighbours, perhaps even in keeping with Saigon’s increasingly edgy image.

Whether the abandoned tower will ever be finished is anyone’s guess, but for the moment it doesn’t look likely. It could become a tourist attraction in its own right, like the abandoned Sathorn Unique Tower in Bangkok, or perhaps against all odds a brave new investor will take it on and perform miracles. For now, however, it’s safe to say that Saigon and its skyline are well and truly haunted.